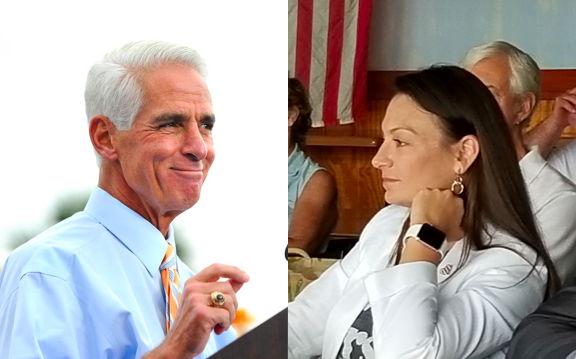 Pollsters surveyed 1,007 registered Democrats, and report a 3.1% margin of error on results. The poll was conducted on June 16 and 17.

The survey shows a slight tightening of the race since St. Pete Polls published its last primary poll in May. But it still shows Crist on the cusp of a 50% majority. It also shows more voters undecided, 26%, than the number committed to Fried.

The polling shows Fried, the only Democrat holding statewide office in Florida, needs to sway the bulk of fence-sitters in the race.

Since the last poll came out, a third candidate in the race, state Sen. Annette Taddeo, dropped out of the gubernatorial contest and qualified to run for Congress.

The latest poll indicated Crist leads with all racial demographics. About 51% of Black voters plan to vote Crist while 17% want Fried, with that group also showing the greatest number of undecided voters, at 32%. Crist wins over 49% of White voters while Fried holds the support of 27% by comparison. Crist leads with Asian voters 70% to 10% and Hispanic voters 49% to 26%.

Almost 50% of male voters prefer Crist while about 24% like Fried. Among female voters, Fried performs better and breaks 25% support but about 43% still plan to vote for Crist.

Crist boasts the strongest support among young voters under age 30, with upward of 60% picking him in the survey while over 22% went for Fried. He also wins with voters over the age of 70, with 52% choosing him and 20% going for Fried. He polls in the 40s with voters 30 through 70 but Fried remains stuck in the upper 20s.

Crist heralded the results after this story was first published.

“I continue to be humbled at the support our campaign has received across the Sunshine State,” Crist said. “I am running for Governor to defeat Ron DeSantis. And I am proud to stand alongside the people of Florida as our campaign mounts an unstoppable movement to deliver our state back to Floridians.”

Of note, Crist’s 25-percentage-point lead in the poll shows a different state of the race than internal polling recently released by Fried’s campaign, which showed her within striking distance of Crist.

previousThe moments resonating from the Jan. 6 hearings (so far)