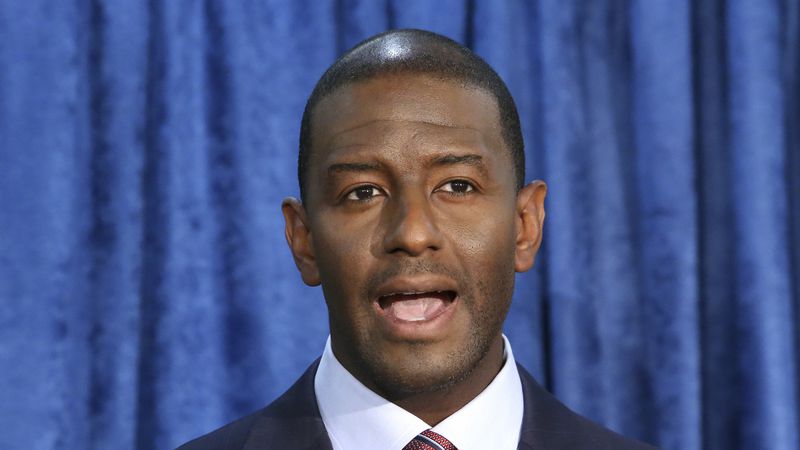 Gillum has pushed back against accusations.

Andrew Gillum, the 2018 Democratic nominee for Governor, has been indicted.

A federal indictment of Gillum and long-time campaign associate Sharon Lettman-Hicks handed down Wednesday relates to accusations dating back to 2016. It alleges that between 2016 and 2019, Gillum and Lettman-Hicks conspired to commit wire fraud by unlawfully soliciting and obtaining funds from various entities and individuals through false and fraudulent promises and representations that the funds would be used for a legitimate purpose.

Gillum pleaded not guilty to 21 charged in federal court on Wednesday. He was released and must appear before Judge Allen Winsor the morning of Aug. 16.

Gillum faces up to 5 years for making false statements. He and Lettman-Hicks each face up to 20 years for 19 counts of conspiracy to commit wire fraud and for wire fraud. Assistant United States Attorneys Stephen M. Kunz and Andrew J. Grogan will prosecute the case, according to the Department of Justice.

Gillum has pushed back against accusations.

“I have spent the last 20 years of my life in public service and continue to fight for the people,” Gillum said in a written statement before the indictment was handed down.

“Every campaign I’ve run has been done with integrity. Make no mistake that this case is not legal, it is political. Throughout my career I have always stood up for the people of Florida and have spoken truth to power. There’s been a target on my back ever since I was the mayor of Tallahassee. They found nothing then, and I have full confidence that my legal team will prove my innocence now.”

While Gillum served as Mayor of Tallahassee, the FBI investigated the city government and ultimately indicted City Commissioner Scott Maddox and Tallahassee Downtown Improvement Authority Executive Director Paige Carter-Smith. But over the course of the 2018 gubernatorial contest, Gillum repeatedly faced questions about whether the investigation would ultimately lead to his arrest.

The indictment lays out an extended period of time when the allegations take place.

While Gillum always maintained he was not the target of the corruption investigation in Tallahassee, which started in April 2015, the indictment indicates he ultimately was investigated.

The indictment lays out meetings set up by a cooperating individual posing as a city developer and with Gillum. It details ways Gillum avoided gift disclosures such as accepting dinner at restaurants owned by the individual. At other meetings, another individual said he discussed ways to donate tens of thousands to Gillum’s committee anonymously.

FBI agents conducted a sting under the guise of wanting to develop the Southern Pines project within the city. The developer cooperating with the FBI said he talked with Gillum in March 17 about upping donations to $100,000 with another $50,000, but Gillum at that point stressed a need to separate donations and development projects in the city in his mind. But direct links were made in several conversations over months.

Ultimately, the indictment states, Gillum “did knowingly and willfully make materially false, fictitious, and fraudulent statements and representations in a matter within the executive branch” during a criminal investigation of the city. Gillum told investigators he stopped speaking with developers for the Southern Pine project, when in fact communications continued as the undercover agents offered hotel stays, a boat tour of New York and even tickets to “Hamilton” on Broadway, all paid for by Southern Pines.

Much of this became well publicized in 2018, in particular through questions about whether Gillum had met with the FBI or accepted trips to Costa Rica and tickets to watch “Hamilton” on Broadway were posed in campaign advertisements from Republicans in the final weeks of the campaign.

Many accusations date back to Gillum’s time as Mayor of Tallahassee.

The indictment goes on to say Gillum and Lettman-Hicks defrauded other companies out of tens of thousands of dollars supposedly going toward the Campaign to Defend Local Solutions, an advocacy group to fight state preemption bills impacting local governments. At one point the National Black Justice Coalition, where Lettman-Hicks has served as CEO since 2017, served as fiscal sponsor for the campaign and accepted funds from outside groups.

Gillum in August 2016 sent one donor organization a proposed budget of about $250,000 for the campaign, but failed to disclose that money would go to P&P and that Gillum would profit.

The group ultimately gave $100,000, and another group gave another $100,000 that was to pass through NBJC to fund the campaign. Lettman-Hicks ended up using money received to directly pay Gillum $50,000 in the form of P&P salary, but told donors the money was being set aside for reserves for the campaign, the indictment states.

Republican Ron DeSantis ultimately won the election by just over 32,000 votes out of more than 8 million cast as scandals loomed over Gillum. The victory came only after a machine recount of votes statewide.

But Gillum continued a pattern of fraud straight into his gubernatorial race, the indictment said, and may have increased in scale. That included scamming one donor of $150,000 out of $250,000 given to Forward Florida supposedly for the Governor’s race that was wired to a nonprofit run by Gillum and Lettman-Hicks. Again, false reports were filed to conceal payments made to Gillum directly from the donations, the indictment asserts.

While not named in the indictment, that individual is suspected of being Donald Sussman, a national Democratic donor.

In the latter part of Gillum’s 2018 campaign, the candidate put Lettman-Hicks in charge of get-out-the-vote operations, who ended up directing tens of thousands to P&P as reimbursement for services never actually delivered. That money rather went toward several end-of-year bonuses for Gillum. The indictment details a series of wire transfers apparently meant to conceal that money being given for political purposes was instead being turned into checks directly to Gillum.

After the 2018 election, Gillum said he abused alcohol and has since discussed taking the results of the election harder than he anticipated. That culminated with a March 2020 incident in which police responded to calls of a crystal meth overdose at the Mondrian South Beach Hotel. Gillum was found in the hotel room intoxicated and maintained he only consumed alcohol that night. The man who needed medical attention, Travis Dyson, was quickly revealed to be a reputed escort. Police released photos in April of bags apparently holding methamphetamines.

While Gillum maintained there was no romantic relationship with other men in the hotel, nude photos of Gillum taken by police ultimately leaked. Gillum in September 2020 came out to talk show host Tamron Hall as bisexual in a sit-down interview alongside his wife, R. Jai Gillum.

After the newest indictment was released Wednesday, Gillum’s legal team released a statement to NBC as well.

“The government got it wrong today. The evidence in this case is clear and will show that Mr. Gillum is innocent of all charges. We look forward to putting this case to rest and giving Andrew and his family peace of mind once and for all,” read a statement.

More information is expected to come at a 1 p.m. press conference, and individuals close to Gillum have indicated any charges may relate to campaign finance violations.

After the end of his campaign for Governor, campaign finance reports revealed he left $3 million unspent in his political committee Forward Florida. That drew heavy criticism from many backers who believed it was held back for a potential presidential campaign in 2020.

Gillum after his loss also spearheaded a voter registration initiative that has been dogged by spending questions.

Questions about use of campaign funds have dogged Gillum since.

Gillum after his campaign formed a nonprofit, Forward Florida Action, in 2020, with a stated mission of increasing voter education, registration and participation.

In May that year, he handed a prop check for $100,000 to Florida Democratic Party leaders at a press event, but that was never followed up with actual cash. The organization later said it represented a commitment to raise money for the party.

Financial disclosures later showed the nonprofit raised more than $2 million for “registering and re-engaging voters who are often unseen and unheard.” But a year later, the number of registered Democrats in Florida had declined, raising questions about how the money had been spent. While party failures can’t be entirely ascribed to Gillum, the apparent stalled effort to register new voters drew further criticism from former supporters.

show_temp by Jacob Ogles on Scribd