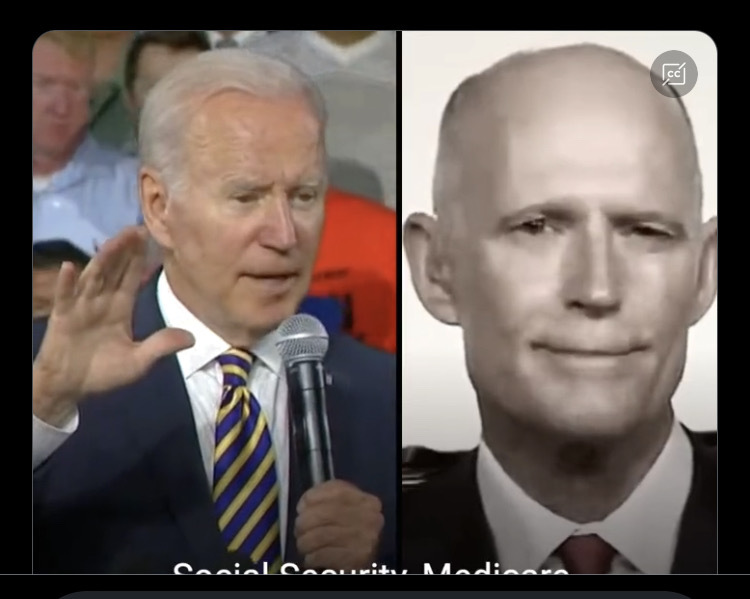 Familiar messaging recurs from the President.

“This is why elections matter,” the President warns, in footage from a recent speech.

The video actually begins with Scott, though it doesn’t mention his name. Juxtaposed images of Biden and the Senator begin the 30-second clip.

“The Ultra-MAGA Republicans,” Biden said. “They’re coming after your Social Security. They’ve written it down!”

“Every five years,” Biden claimed, “Social Security, Medicare, and Medicaid have to be reauthorized or they go out of existence.”

Scott has previously contended that Biden is “obsessed” with his plans, which even Senate Republicans have distanced themselves from. This new spot is the latest indication that contrasting to Scott and his “ultra-MAGA agenda” has become central to Biden’s strategy to stave off Democratic losses in the midterm elections.

“Joe Biden is clearly obsessed with my plan to rescue America and very confused about his own agenda that is devastating American families,” Scott asserted in April.

One reason Biden is comfortable using Scott in this role is that Senate Minority Leader Mitch McConnell is already on record as not backing the proposals, should he remain leader of the caucus next year.

Another reason is that national polling has shown Scott’s proposals, and Scott himself, are not surveying well beyond the Republican base.

According to a national survey of 2,005 registered voters from Morning Consult and POLITICO, Scott is underwater with virtually all demographics, except self-identified conservatives and Republicans.

Independent voters were notably sour on the Senator in the May poll. Just 12% of them approved of Scott, with 29% disapproving. Men particularly were opposed to Scott, with 36% of male independent voters regarding him unfavorably, a staggering -25 with the demographic.

This is why elections matter. pic.twitter.com/KW3nENBtgr

next4 days in January: Donald Trump push for Capitol coda to 2020 vote