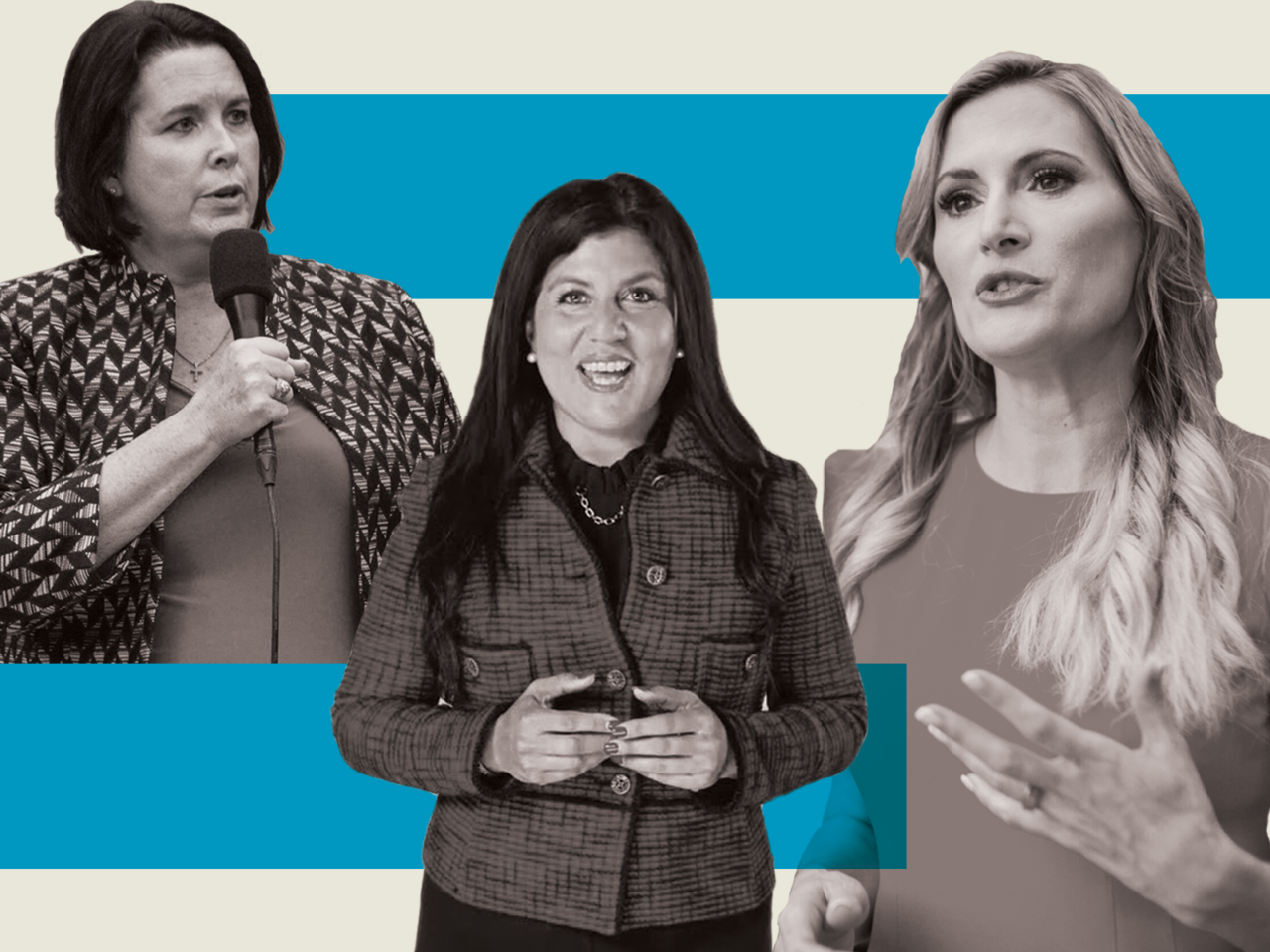 Laurel Lee, Kelli Stargel, Jackie Toledo all vie for the GOP nomination in an open seat.

The battle in Florida’s 15th Congressional District has become one of the most hard-fought in the state, with super PACs backing all three women piling mailboxes with positive and negative mailers.

In March, Toledo became the first major candidate in the race and quickly established herself as a fundraising leader, collecting more than $550,000 for the run.

A civil engineer by trade, she has run on the platform of being a “mom on a mission.” She’s also pointed to a legislative record where she favored a number of Gov. Ron DeSantis’ top agenda items including a ban on critical race theory in schools and a 15-week abortion ban.

Notably, she’s an experienced campaigner in battleground House districts from her time in the Legislature.

But Lee, a former Hillsborough circuit judge, shook up the race after she resigned as DeSantis’ Secretary of State so she could run for the open seat. She brought with her an instant DeSantis imprimatur, even if the Governor hasn’t formally endorsed in the contest.

Despite being the last major Republican entry into the race, she rapidly raised more than any other candidate still in the field, reporting more than $660,000 over the course of her campaign. At a Hollywood debate, Lee offered sharp attacks on President Joe Biden’s administration, including calling for the Homeland Security Secretary to resign.

She has also employed numerous political connections. The daughter of an Air Force General, Lee has rallied the high concentration of veterans in the district. Married to former Florida Senate President Tom Lee, the Thonotosassa Republican benefited from financial support from his years running for office.

Stargel, the sitting Florida Senate Appropriations Committee Chair, boasts a reputation as the most prominent Polk County-based player in the race. The Lakeland Senator launched her bid in May. While her campaign and a super PAC supporting her sometimes made headlines over missing filing deadlines, she rallied nearly $350,000 together before the close of the pre-Primary reporting period.

She’s also the candidate with the most experience on the campaign trail in the race. First elected to the Florida House in 2008 and then the Florida Senate in 2012, she’s a familiar name to Polk County voters, even before factoring in that her husband, John Stargel, also ran multiple times and serves now as an appellate judge.

In the Republican Primary, Stargel can also lean on her support for some bills that have generated outrage on the Left but enthusiasm on the Right, including a ban on transgender girls playing in scholastic women’s sporting events in Florida and a 15-week ban on abortion, passed ahead of Roe v. Wade being overturned.

While Lee, Stargel and Toledo have enjoyed the highest profiles in the race, two veterans in the contest should not be ignored.

Kevin ‘Mac’ McGovern, who originally planned to run in Florida’s 7th Congressional District, has largely self-funded in the race. A former advisor to Gen. David Petraeus, he has spent more than $350,000 to campaign in the region and contributed almost half a million out of pocket to the race.

Another veteran, Demetries Grimes, served in Afghanistan as a military prosecutor and judge, and later as a diplomat in Israel and Greece. He has raised more than $410,000 for the race and spent half of that getting his own name out there.

The two military candidates have not made as many headlines but also steered clear largely on negative attacks sent out against the state candidates in the contest.

The race for who represents CD 15 represents one of Florida’s biggest two-act elections this year. The district, effectively a new House seat awarded to Florida following the 2020 Census, leans Republican, but barely. About 50.86% of voters in the district went for Republican Donald Trump in the 2020 Presidential Election, compared to 47.74% who voted for Democrat Joe Biden.

Most forecasters anticipate 2022 will be a strong year for the GOP, something reflected in the fact all five Republicans in the running have raised and spent more money than any Democrats in the field. But the contest holds the potential to be one of the most closely watched in the General Election as Republicans hope to secure it by a healthy margin.

previousKim Daniels seeks return to House, but do Democrats want her?