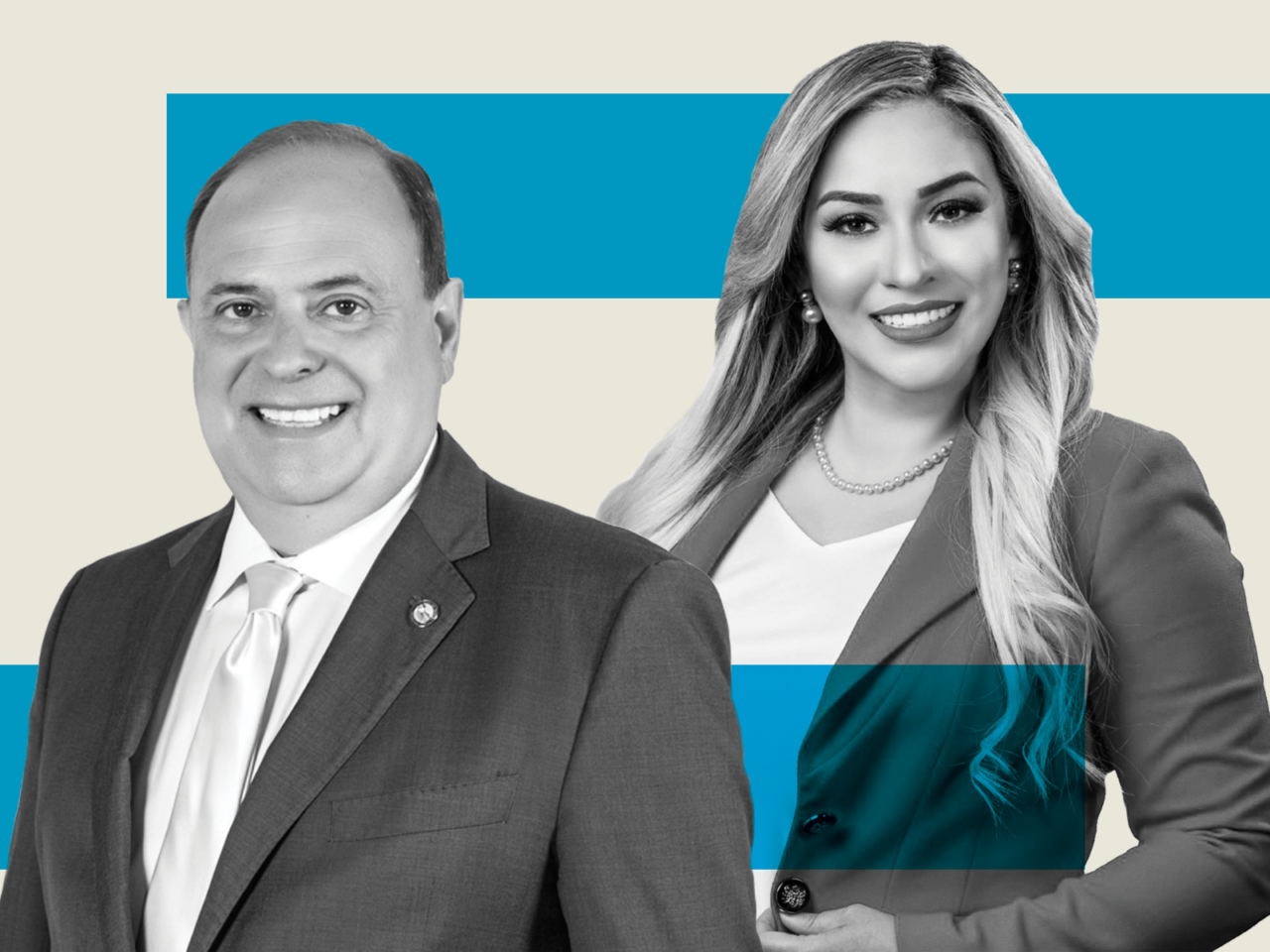 Their combined fundraising exceeds $2M. The job they're competing for pays $6K a year.

For voters casting ballots Tuesday for the District 12 seat on the Miami-Dade Commission, the choice is between a longtime civic leader known for his measured stance on local issues and a convicted perjurer whose campaign is riddled with red flags.

In one corner, there’s Juan Carlos “J.C.” Bermudez, the founding and current Mayor of Doral, one of several municipalities — including Hialeah, Hialeah Gardens, Medley, Sweetwater and Virginia Gardens — and a large portion of the county’s unincorporated area encompassed by District 12.

In the other, there’s Sophia Lacayo, a tax preparer, real estate investor and Spanish-language talk radio host who was forced to resign from the Sweetwater Commission in 2020 after pleading guilty to perjury for falsely claiming she lived in the city during her campaign.

Both are Republican, of Latin American descent and include backing small businesses and first responders in their respective campaign platforms. That’s about where the similarities end.

Bermudez has a nearly two-decade political career to lean on, including his two stints as Doral Mayor; his current Vice Chairmanship of the county’s pivotal transportation planning board, which steers billions of locally, federally and state-funded mobility projects; and board memberships to numerous leagues of cities and the U.S. Conference of Mayors.

His campaign for the County Commission has also attracted scores of endorsements from the likes of Republican former President Donald Trump, Democratic Miami-Dade Mayor Daniella Levine Cava, the mayors of nearly every municipality District 12 covers and a multitude of local unions and trade groups.

Lacayo, meanwhile, boasts the bigger campaign pocketbook and a penchant for playing dirty.

This election cycle, Bermudez raised more than $860,000. Of that sum, he has spent more than $600,000 on consulting, advertising, canvassing, signage, apparel and other general campaign costs.

Through Aug. 5, Lacayo reported raising $1.24 million. More than 91% of that — $1.13 million — came either from her own bank account, businesses she owns or family members, according to her filings with the county.

As of Aug. 5, she spent more than $1 million on various campaign costs, including heavy spending on advertising — an incredible amount of money to spend on a job that pays $6,000 yearly, not counting various benefits.

Some of the cash paid for an attack website called NoBermudez.com and a pair of Spanish-language videos that have been viewed on YouTube a combined 57,000 times. The videos, which feature three people as talking heads, claim Bermudez oversaw policies as Doral Mayor that harmed an “innumerable” number of small businesses and that he was complicit in underage narcotics use, sex work and coverups of drug overdoses.

Her campaign also funded misleading mailers whose design suggested she had received an endorsement from Levine Cava and Miami state Sen. Annette Taddeo, both Democrats. Both swiftly made clear they did not support Lacayo, with Taddeo urging voters to back Bermudez at the ballot box.

At the same time, Lacayo is facing a lawsuit from Sweetwater, which is demanding she repay nearly $69,000 in wages she received while illegally serving as a Commissioner. In July, she dropped an effort to seal the records of her perjury case after prosecutors pushed back, arguing the public should know of a candidate’s prior misdeeds.

She is married to Nelson Rubio, a local broadcaster who has bashed Bermudez on air while promoting his wife’s campaign, and claimed on her financial statement to have a net worth of nearly $25 million.

She also may not speak English fluently. A YouTube search for video interviews of her in English online yielded just one result, and the conversation quickly switched to Spanish after Lacayo stumbled over thanking the interviewer for speaking with her.

According to NBC 6, Lacayo declined “about a dozen interview requests” and has refused to debate Bermudez. The outlets said that while being interviewed by investigators over her unrefunded Sweetwater salary, she spoke in Spanish, which had to be translated into English.

The Miami Herald reported that Lacayo agreed to speak to a reporter at a recent campaign event, answering the first question in Spanish after an aide translated it from English. Lacayo insisted that she speaks “English very well” but declined to continue the interview.

There appears to be no rule mandating that a person must speak English while serving in their capacity as County Commissioner. But a lack of proficiency in English could prove problematic on the Miami-Dade Commission dais. All documents the Commission reviews, including reports, budget items, resolutions, ordinances and other materials, are also produced in English. The Commission employs translators when hearing from residents who speak only Spanish or Haitian Creole.

Bermudez’s campaign stresses his “experience and transparency” in government. He vowed, if elected, to improve residents’ quality of life, “fight wasteful spending by our county government,” support health care workers, boost the economy and look for “innovative ideas” to solve the county’s traffic and transit issues.

Lacayo promises to address housing affordability and community health. She said she will work to unsnarl Miami-Dade’s half-percent sales tax known as the “half-penny” from paying for existing operations and maintenance of transit and transportation and reroute it toward its intended use — expanding transit and improving transportation. (Miami-Dade Commissioners voted to do just that in March 2019.)

Bermudez and Lacayo are competing to succeed Miami-Dade Commissioner Jose “Pepe” Diaz, who must leave office in November due to term limits voters approved in 2012.

Diaz, a former Mayor of Sweetwater who has served on the Miami-Dade Commission since 2002 and currently serves as its chair, is rumored to be planning a run to again lead the city, his longtime home.

He and Bermudez were at odds last year over a business-rich area that generates more than $1 million in annual tax revenue for the county and contains distribution centers for Amazon, Goya Foods, UPS and John Deere.

Both Doral and Sweetwater applied to annex the area, but Diaz in July 2021 succeeded in passing a fast-tracked ordinance imposing new restrictions blocking Sweetwater — but not Doral — from being able to absorb the area.

On Dec. 1, the Miami-Dade Commission, which Diaz chairs, gave a final OK to Sweetwater’s annexation of the two-square-mile area.

Bermudez called Diaz’s actions from the dais “totally inappropriate,” adding: “This is why people get bothered by government. Changing the rules in the middle of the game is bad policy, bad government.”