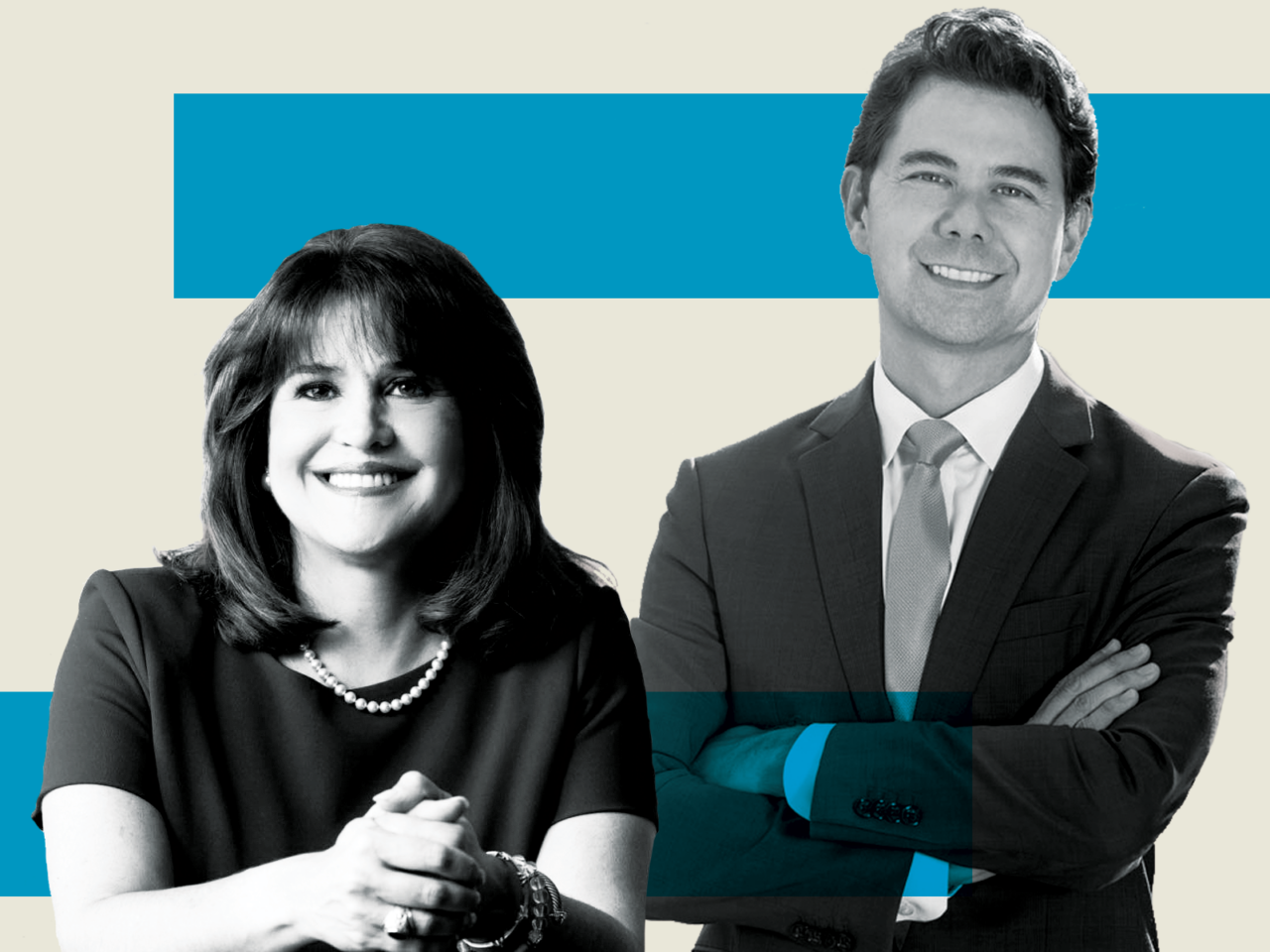 They also face Democratic socialist opponent Angel Montalvo, who is alone in the Democratic Primary in running a fully grassroots campaign.

Florida’s 27th Congressional District spanning southeast Miami-Dade County is the battleground of Primary races between three Democrats and two Republicans, each vying to represent their political party at the ballot box this November.

On the GOP side, the odds-on favorite is incumbent U.S. Rep. María Elvira Salazar, a decorated broadcast journalist turned politician who flipped the CD 27 seat red two years ago. She faces Frank Polo, a local community leader and Donald Trump loyalist who contends Salazar is a “Republican in name only” because she has occasionally voted with Democrats in Congress, including approving the Jan. 6 Commission.

The Democratic field, meanwhile, includes state Sen. Annette Taddeo, who switched over from an earlier bid for Governor; Miami City Commissioner Ken Russell, who has leveraged social media platforms like TikTok to stir interest among younger, more digitally inclined voters; and Angel Montalvo, a self-professed Democratic socialist who is running a “100% grassroots” campaign.

Of the three, Taddeo has been involved in politics the longest. Her political career began in 2008, when she mounted a campaign to unseat former U.S. Rep. Ileana Ros-Lehtinen in Florida’s 18th Congressional District. She fared decently, capturing 42% of the vote in the General Election after cruising through the Democratic Primary unopposed.

She has since sought several other elected positions and won some, including her 2012 election as Chair of the Miami-Dade Democratic Executive Committee and her 2017 victory in a special election for Senate District 40. She is the first Latina Democrat to hold a seat in the chamber.

Taddeo, 55, has a personal story that resonates with many of her constituents, and her campaign is leaning into it this election cycle. Born in Colombia, where she underwent 19 surgeries to correct a cleft lip, she fled the country for the United States at 17 after the Marxist guerilla group FARC kidnapped her World War II veteran father.

She’s proven herself an effective opponent of some GOP tactics and policies. Following news of a voter registration scam in which Spanish-speaking Miami residents were tricked into switching their party affiliation from Democrat to Republican, Taddeo led an effort to determine who was responsible.

She later convinced her Republican Senate colleagues to include language raising financial penalties for organizations whose employees alter voter registration forms without a person’s knowledge in legislation that will go into effect next year.

Behind the scenes, Taddeo said she helped end a Republican measure prohibiting unions from deducting monthly dues from members’ paychecks.

She’s also unafraid to criticize her own party at the local and federal levels. In February, she and Republican Miami Sen. Ileana Garcia teamed up to lead the Senate in opposing President Joe Biden’s removal of FARC from the U.S. list of foreign terrorist organizations.

Russell, a 49-year-old woodworker and former yo-yo champion, won a seat on the Miami Commission in 2015 after leading a neighborhood push to remediate toxic soil in a nearby park. He’s now serving his second term and, like Taddeo in the Senate, he’s always been outnumbered by Republicans on the technically nonpartisan city panel.

Since his election seven years ago, Russell has prioritized two issues: affordable housing and environmental protection. Among his signature successes was the 2017 passage of the Miami Forever Bond, a $400 million set-aside for sea level rise and flood prevention, development of workforce and affordable housing, public safety, roadways and cultural facilities.

Earlier this year, he cast the pivotal vote approving a 99-year lease of the city’s largest greenspace to the owners of Miami’s Major League Soccer team for the development of a massive soccer stadium complex.

Russell fought for a requirement that the developers purchase land elsewhere upon which to develop replacement park space for the 70-plus acres their project would pave over. He also held off voting “yes” until the developers agreed to increase the minimum wage for workers there to $18 per hour.

Russell had been campaigning almost a year for Marco Rubio’s U.S. Senate seat when he switched races in May to avoid a Primary battle with U.S. Rep. Val Demings.

Internal polling that month showed Russell within striking distance of Salazar, with just 2 percentage points separating him and the incumbent. But a poll in June, less than a month after Taddeo entered the CD 27 race, found Taddeo enjoying a double-digit edge in name recognition over Russell and a 36-percentage-point lead in favorability. Montalvo trailed far behind both with a 1-percentage-point level of support compared to 51% for Taddeo and 15% for Russell.

Russell went on the attack in July. He targeted Taddeo’s environmental voting record regarding the sugar industry, as well as her record with utility giant Florida Power & Light, both of which indirectly donated large sums of money to her political committee.

Taddeo denied she is beholden to those special interests. She voted against an FPL-backed bill last Session that would have hampered solar energy expansion statewide. However, she also supported legislation beneficial to sugar companies that environmental groups argue would have favored agriculture to the detriment of other water uses and the environment, particularly the Everglades.

Taddeo and Russell have each accumulated ample endorsements this cycle. Both won nods from local unions and from currently and formerly elected local, state and federal officials. And while Taddeo holds an edge in organizational support, Russell is alone in being backed by the Miami Heat’s longest-tenured player.

Montalvo, 29, is a farmer, baker and gig worker. He’s running on a platform similar to the one U.S. Sen. Bernie Sanders of Vermont had in his 2016 and 2020 runs at the presidency, including prioritizing the passage of a “Green New Deal,” Medicare for all, racial justice and immigration reform.

He’s also calling for further COVID-19 relief through “the boldest piece of legislation ever written in modern history” and a “housing for all” plan that will “create millions of well-paying jobs, tackle the climate crisis, and give Floridians the dignity they deserve.”

By the end of the second quarter of 2022, the most recent period for which candidates were required to report financial activity, Russell led fundraising among Democrats with $1.75 million. Of that, he had about $469,000 remaining after a healthy round of campaign spending.

Taddeo gathered $457,000 in just 24 days — an impressive haul, considering none of the funds she accumulated during her gubernatorial bid were transferable to her congressional campaign. She spent about $30,000 of that by June 30.

Montalvo raised a comparatively paltry $26,000, nearly half of which covered a qualifying fee with the Division of Elections. He had Just $2,451 on hand at the end of the quarter.

The combined fundraising of Taddeo, Russell and Salazar amounts to less than 60% of Salazar’s gains this cycle. Since she defeated Democrat Donna Shalala in a 2020 rematch of their first meeting two years earlier, Salazar amassed more than $3.7 million to hold onto her seat.

While painted by critics as a far-right-leaning lawmaker, Salazar has broken ranks with her GOP colleagues on several key issues, including joining just 13 other Republicans in June to vote for raising the legal age to buy assault rifle-style firearms from 18 to 21. She was the only Republican member of Congress from Florida to support the measure.

Salazar has also taken a big swing at overhauling the U.S. immigration system by sponsoring a 532-page reform package that would create a pathway to citizenship for migrants living in the country illegally.

Titled the Dignity Act, the measure would create multiple programs through which undocumented residents can stay and work in the U.S. while paying an annual fee. The money collected would fund retraining programs for U.S. workers and strengthening of the U.S. border.

Polo, who lists immigration reform as one of his campaign priorities, said the legislation is misleading to Latinos because it’s unobtainable.

The district has alternated blue and red since 2019, when Ros-Lehtinen retired.

Analyses of CD 27, as redrawn by Gov. Ron DeSantis’ administration, show it is now safer than before for Republicans but still the most closely divided congressional district in Florida.