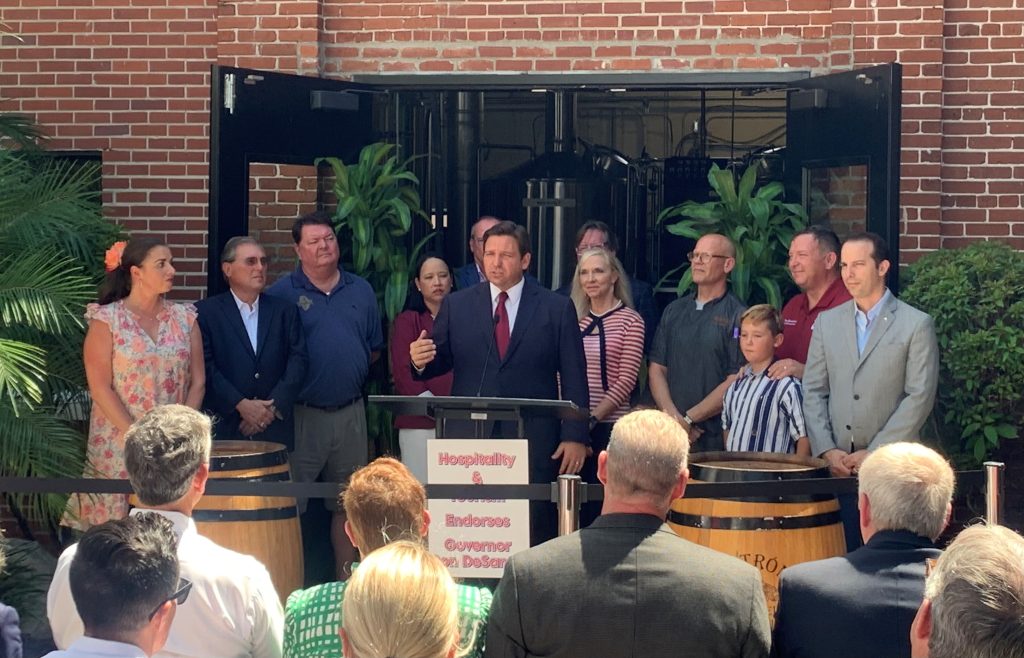 ‘Gov. DeSantis’ leadership saved countless jobs and businesses across our state and has enabled our industry to thrive once again.’

The Florida Retail Federation and Florida Restaurant & Lodging Association are throwing their support behind Gov. Ron DeSantis’ re-election bid, pointing to his insistence on keeping the state open during the pandemic as a key reason.

The nonprofits announced their endorsements of DeSantis in Tampa alongside hospitality workers and industry leaders. They join numerous other groups, including the Florida Realtors PAC, in backing him.

“Ron DeSantis has been a strong supporter of our industry, keeping hotels and restaurants safely open and operating when other states shut down,” Florida Retail Federation President and CEO Carol Dover said in a statement.

“(His) leadership saved countless jobs and businesses across our state and has enabled our industry to thrive once again. He understands the critical role that hospitality and tourism play in our state’s economic vitality, and we are confident he will continue to do so in his second term as Governor.”

“Florida retailers are grateful for the leadership of Gov. Ron DeSantis,” he said in a statement. “The Governor has remained committed to keeping Florida open for business and has enabled the retail industry to overcome these challenging times and prosper. We are proud to provide our endorsement of his campaign.”

As it did nationwide, Florida’s employment rate in the leisure and hospitality industry plummeted after COVID-19 began spreading in March 2020, falling from 1.24 million jobs to 707,500 in just one month, according to the Bureau of Labor Statistics. As of July this year, the rate is back to pre-pandemic levels — something that cannot yet be said for California and New York.

In the first quarter of 2022, a record 36 million people traveled to Florida, according to a July report from VISIT FLORIDA, which found the number of visitors grew by nearly 40% year-over-year and was 1.3% higher than the pre-pandemic first quarter of 2019.

The reason for all this, DeSantis said in a statement, is because Florida never went dormant under his leadership.

“Our restaurants and hotels have done better than anyone expected just a couple years ago,” DeSantis said in a statement. “By keeping the state open, Florida has experienced record-setting tourism, our labor force growth outpaces the nation, and we have achieved record levels of unemployment and job creation,” he said. “Florida continues to prove that the Freedom Agenda works.”

In addition to supporting retail and hospitality businesses by eschewing lockdowns, DeSantis’ administration has worked with the groups and others to combat illegal trade, including human trafficking, drug smuggling and counterfeit goods.

Recent polling suggests that while DeSantis holds a lead over Crist among likely voters, the gap is not insurmountable, particularly if independent voters turn out on or before Nov. 8.