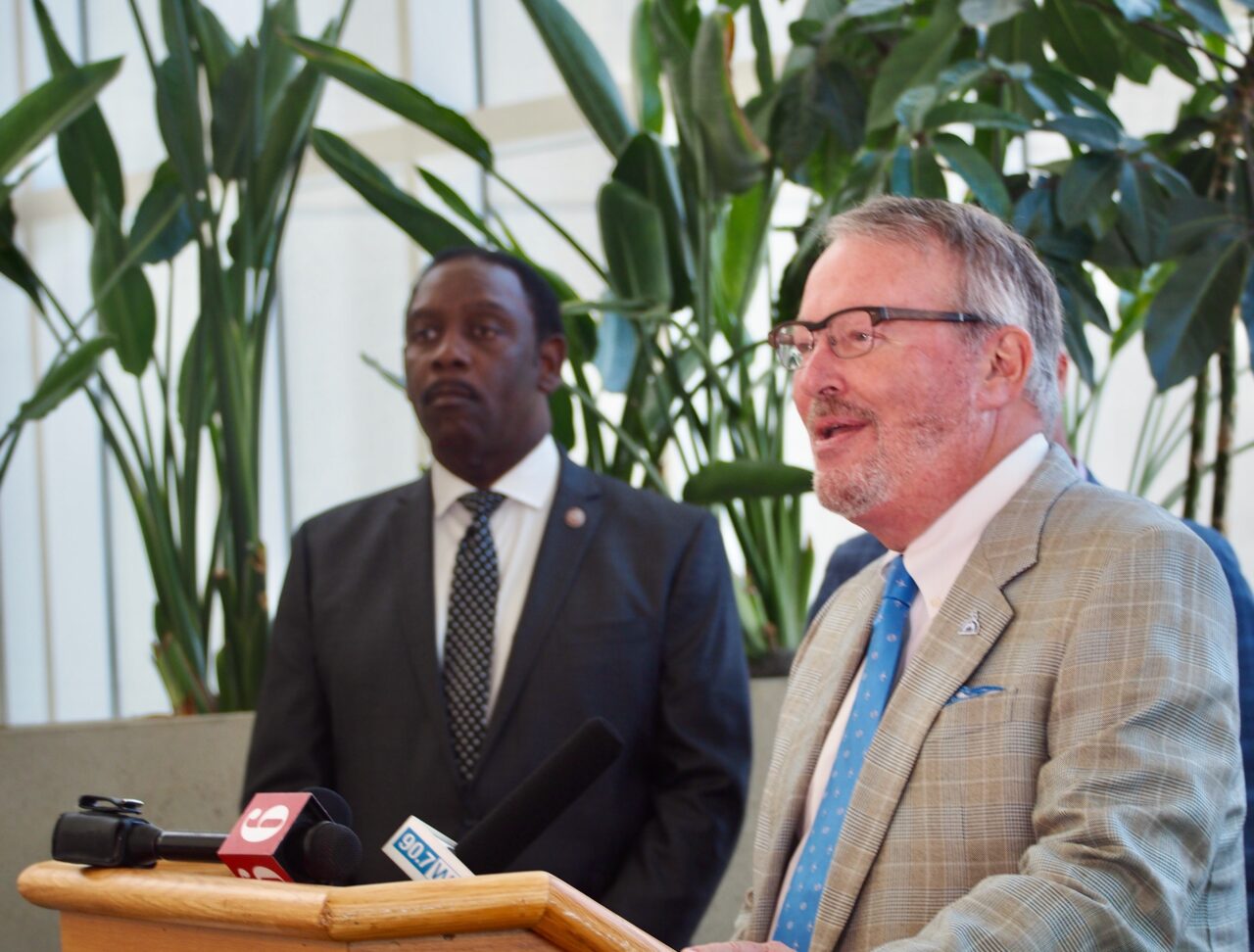 Orange County Mayor Jerry Demings, Orlando Mayor Buddy Dyer and a coalition of business and labor leaders kicked off what will likely be a million-dollar-plus campaign to convince county voters to vote in this year’s General Election to increase their sales tax by a penny to improve transportation.

Demings, Dyer and the others kicked off the Move Orange County Forward campaign at the Orlando International Airport train station — a confluence of planes, trains, buses and cars — with high hopes that they could convince voters the region’s future depends on greatly expanding transit and improving transportation. And that will cost an extra penny in sales tax in Orange County.

They were joined by business and labor leaders, including Tim Giuliani, president of the Orlando Economic Partnership, Gaby Ortigoni, president of the Hispanic Chamber of Commerce Metro Orlando, and Adam Beaton, a transit rider and official at the UNITE HERE! Local 362 at Walt Disney World. They argued the initiative is needed both for the future economic growth of the area and to meet the workforce’s needs in an increasingly difficult commute.

“This is all about the integration of what Moving Orange County Forward means to our community and the collaboration between the public sector, the private sector the philanthropic sector. If we work across all of those sectors we can make this happen,” Demings said. “And so we are dependent upon our voters in November to pass this. We believe we are in pretty good shape at this point in terms of the potential to pass it.”

Demings said polling he had done for his own re-election campaign, and others including business groups have done, suggest the sales tax “is likely to pass.”

He said the campaign, being managed by Reggie Cardozo of The Public Square Ltd., is aiming to raise $1 million to $2 million to communicate that message.

There is a precedent. In 2004 then-Orange County Mayor Rich Crotty and Dyer teamed up to campaign for a sales tax initiative to pay for transit and transportation improvements. But that effort, dubbed Mobility 2020, was voted down.

“Don’t take it for granted,” was Dyer’s lesson from the Mobility 2020 campaign. “And that was a long time ago, 2004, 18 years ago, Much has changed. The need for this penny sales tax is even more apparent today than it was 18 years ago.

“If we’re going to continue to have this type of community that we have come to love, mobility is critically important. If we’re going to be able to handle the growth in a smart and efficient way, transportation is the key to that,” Dyer said. “If we are going to have the type of quality of life we all want to have in our community, passage of this initiative is really critical.”

Demings offered a vision going far beyond improving transit and transportation in a metropolis known for spotty transit and clogged transportation. He reached back to 1966 when Walt Disney announced his dream of a utopian community in Central Florida, which he dubbed the Experimental Prototype Community of Tomorrow.

Disney, who died shortly after unveiling his EPCOT plans on national TV on “the Wonderful World of Disney,” never built that community, nor did his company. Instead, his successors at the Walt Disney Co. built a theme park they named EPCOT, then developed a modern — but still pretty standard — community a few miles away called Celebration.

nextGov. DeSantis wants tolls cut in half for frequent commuters next year