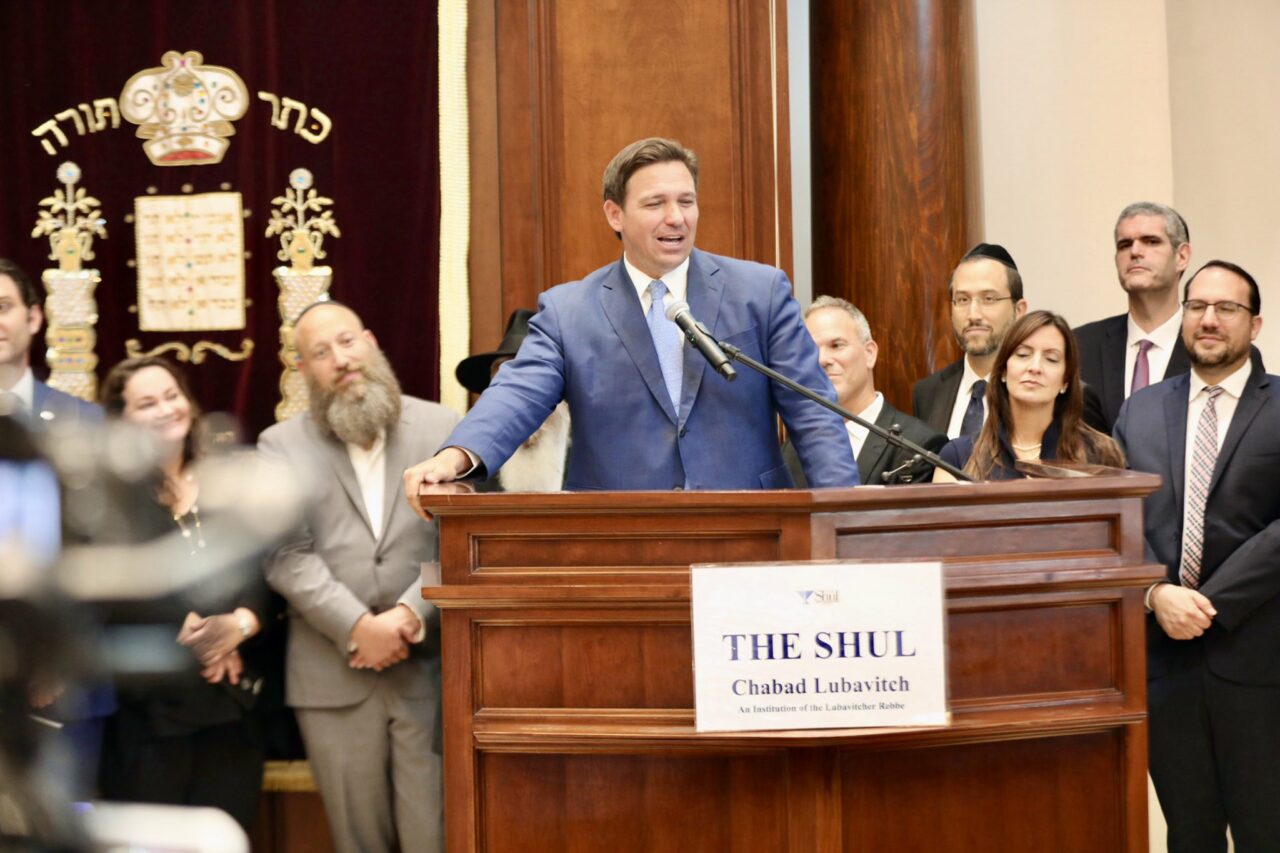 ‘Governor DeSantis rejects attempts to scapegoat the Jewish community — it has no place in Florida.’

Gov. Ron DeSantis‘s is denouncing antisemitism after a weekend that saw hateful displays across the Sunshine State.

The statement, sent by DeSantis Press Secretary Bryan Griffin Monday afternoon, comes after Florida Democrats criticized the Republican Governor for not immediately condemning the acts. A homeowners’ association property was defaced in Weston this weekend after other, anti-Jewish sentiments were displayed around Jacksonville Friday and Saturday, most prominently at a full-capacity football game between the the University of Florida and the University of Georgia at the TIAA Bank Field.

Griffin also listed several of the Governor’s achievements in supporting the Jewish community and combating antisemitism. Among the named measures was a law DeSantis signed in Israel in 2019 that formally banned antisemitism in schools. Another piece of legislation signed the following year mandates school curriculum about the Holocaust.

DeSantis has also used Florida’s “anti-BDS” law against companies like Ben & Jerry’s to stop buying shares of companies that take positions against Israel. In the Ben & Jerry’s case, the ice cream brand and its parent company initially announced they would no longer sell products in the Israeli-occupied Palestinian territories at the end of 2022 before later reversing its position.

DeSantis was at Saturday’s Georgia-Florida game before heading to New York state to campaign with Lee Zeldin. His office didn’t comment until two days later, leaving time for critics to condemn both the demonstrations and the Governor.

“This year alone, Ron DeSantis has had a disturbingly high number of opportunities to condemn anti-Semitism, including neo-Nazi supporters waving a flag that bears his name, but he’s chickened out every time. For someone who seemingly launches a new culture war every day, it is extremely telling that he won’t confront this type of hatred,” said Florida Democratic Party spokesperson Travis Reuther.

“It’s clear that this is DeSantis’ electoral strategy to court the most extreme and hateful segments of his base and that he will always be too much of a coward to protect his constituents from neo-Nazis, white supremacists, and hate groups when the time comes.”

Democrat Charlie Crist, who is challenging DeSantis for the Governor’s Mansion on Election Day next week, blamed the Governor’s “absolute failure of leadership” for facilitating the displays before and after the event.

“I am disgusted and horrified at the hateful, antisemitic rhetoric that was displayed in Jacksonville this weekend. Hate should have no home in Florida, period,” Crist asserted on Sunday.

“But while antisemitism is spreading in our state, Governor DeSantis refuses to condemn it – even when it’s broadcast on the side of a stadium he is in,” Crist added. “It’s a disgusting and absolute failure of leadership. Today and always, I stand with our Jewish neighbors in Florida and across the nation.”

nextJoe Henderson: When it comes to hate crimes, there's no 'yeah, but....'