The Jacksonville City Council on Friday passed its remedial redistricting map, meeting a court-ordered deadline after its first plan was spiked.

Jacksonville passed a redistricting map earlier this year to take effect in time for next year’s elections that largely mirrored current boundaries approved in 2011. However, a federal judge struck it down, citing a lack of compactness and an “unnecessary racial segregation” throughout areas North and West of the St. Johns River.

In the end, they advances another version that has some of the same issues, including an assurance of Republican control, with four majority Democratic districts, and two with Democratic pluralities. The remaining eight districts are Republican plurality, and no district is packed to be majority Republican.

Early in the meeting, General Counsel Jason Teal stressed the importance of the Nov. 8 deadline, urging Council to move forward.

After hours of discussion, a workable map made it to the floor only to fall short by one vote, before Council ultimately decided to reconsider, pass a product and at least meet the deadline.

Maroon 3E Fix would, if approved by the court, unite all of Riverside and Avondale into District 10 and makes a minor boundary change in a “notch” between 7 and 10 in the Fairfax area. Districts 7 and 8 are also flipped to satisfy incumbent Ju’Coby Pittman and Gaffney, whose son is running to replace him in District 7.

Though 12 of the 16 people attending the meeting voted for the bill, that didn’t meet the 13-vote supermajority threshold on the first vote. Upon reconsideration, however, Council passed the map.

There was some doubt among the public during the hearing portion early in the meeting that any new product would be any more defensible than the previous.

One of the plaintiffs against the first map, Ayesha Covington, panned the new maps as willfully “segregated,” expressing hope for judicial mediation.

Though Duval County has a Democratic plurality, Republicans have had a supermajority on the City Council, in no small part due to the packing of Democratic voters in minority-access districts north and west of the St. Johns River. That will remain the same.

Jacksonville also has five at large seats which typically perform Republican. This map won’t change GOP control of the Council. The question of whether it mollifies a federal court, meanwhile, is still an open one. The map is still subject to plaintiff review, and plaintiffs will be able to submit their own map again as well.

“What’s the indicator that this judge is going to agree to any map passed by this body,” asked Brenda Priestly Jackson, who was instrumental to the redistricting plan that was spiked. She would be the only No vote this time out. 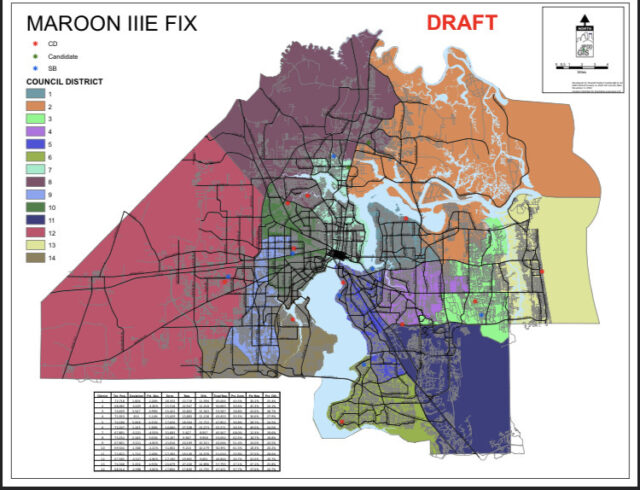