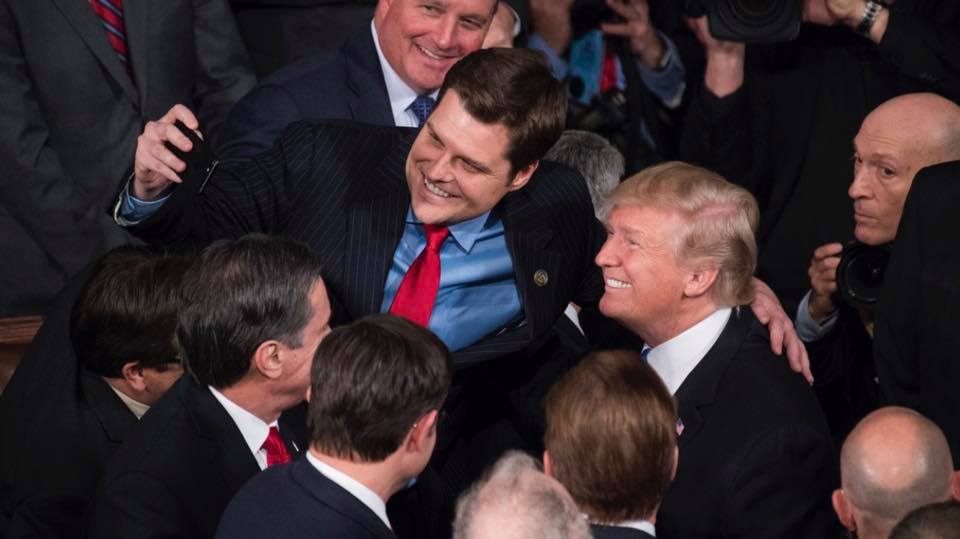 'We won’t accept any imitation.'

Back in 2018, U.S. Rep. Matt Gaetz was central to the campaign of Republican gubernatorial candidate Ron DeSantis.

Gaetz was not central to the re-election effort, and if a piece from the Daily Caller he wrote is any indication, he’s not on board with the DeSantis 2024 trial balloon being floated on the Right, especially in the wake of the Midterm Elections.

Rather, Gaetz wants four more years of Donald Trump. Or as he put it, “America needs Donald Trump in the White House.”

“The job President Trump started was not finished. Only Trump can be trusted to enact the ‘America First’ agenda he ran on in 2016. We won’t accept any imitation. Despite what many Washington, D.C., conservative elites want you to believe, we are not in the ‘post-Trump era’ or close to it,” Gaetz contended.

The Congressman then called out DeSantis’ leading donor.

“Just look at who is lined up against Trump already in the 2024 primary. It’s folks like Paul Ryan or billionaire mega-donor Ken Griffin, who is planning to back a Trump challenge. POLITICO reports Griffin ‘wants to … blunt the vein of populism that has complicated the party’s relationship with the corporate world.'”

Griffin gave DeSantis $5 million this cycle, and his belief is that America would be “well-served by him as President.” Gaetz believes that illustrates further the need to “drain the Swamp,” as Trump famously put it.

“Why would we stop the progress now and go back to Republicans supported by Wall Street? We shouldn’t bench our star quarterback at halftime.”

The apparent distancing between Gaetz and DeSantis was evident last year, as the Congressman was reportedly being investigated by the Department of Justice. DeSantis said that he didn’t “have anything to say,” shutting down that line of inquiry, and refusing the chance to defend someone who was key in his ascent to the GOP nomination and Governor’s Office.

And once the Primary was in the rearview, Gaetz only got rougher with DeSantis’ then-General Election opponent.

“I don’t know whether to call him Andrew Gillum or ‘Andrew Kill-‘em,’” Gaetz said during an October campaign event with DeSantis in Southwest Florida of DeSantis’ then opponent. The joke was about Tallahassee’s murder rate, and critics saw it as just another in a series of racial gaffes from the DeSantis side.

Gillum was under scrutiny at the time from the FBI, which was investigating larger issues in Tallahassee. Gaetz suggested a better name for the Democratic nominee would be “Andrew Guilty.”

Gaetz and DeSantis were fixtures at events not just in Gaetz’s home Panhandle, but throughout the state. He ended up with a plum prize, of course, a prominent role on the Governor’s transition team.

Gaetz’s influence was felt in an early policy decision of DeSantis, reversing the Rick Scott era prohibition on offering flower for smoking in the state’s medical marijuana program.

“Whether they have to smoke it or not, who am I to judge that?” DeSantis said. “I want people to have their suffering relieved. I don’t think this law is up to snuff.”

But that is apparently ancient history, as Gaetz has lined up against the Governor.