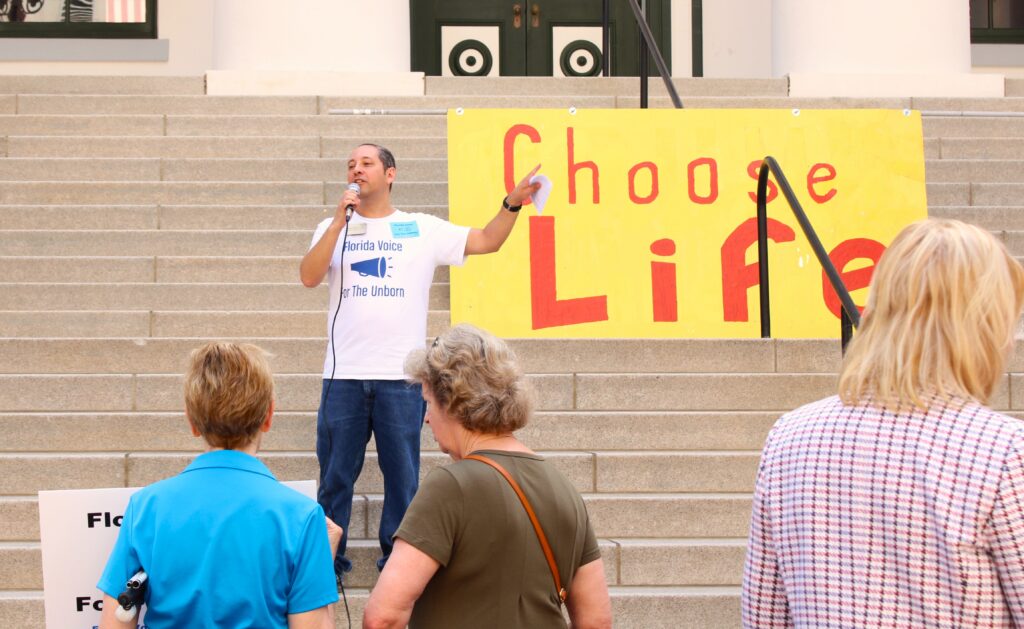 ‘If they can’t get something done now, boy, there’s very little hope …’

Anti-abortion activists plan to rally at the Florida Capitol when the Legislature gathers there on Nov. 22 to reorganize following the Midterm Elections and demand that lawmakers take up new restrictions on the procedure before the end of the year.

Gov. Ron DeSantis has proposed a Special Session within that frame to approve property tax relief for people whose homes and businesses were damaged or wiped away by Hurricane Ian, plus insurance market reforms.

He has been silent on whether he’d expand that session to take up abortion.

“We have nothing further to announce at this time beyond the initial call,” Bryan Griffin, press secretary for the Governor said in an email on Thursday. (DeSantis hasn’t issued a formal call but has announced agreement with legislative leaders to convene.)

Andrew Shirvell, founder and head of Florida Voice of the Unborn, called upon DeSantis following his re-election Tuesday night — and the election of enough Republicans to constitute supermajorities in the House and Senate — to act soon.

“We have supermajorities now in the Florida Senate and in the Florida House. I mean, if they can’t get something done now, boy, there’s very little hope of them actually ever getting anything done,” Shirvell said in a telephone interview.

Legislative leaders plan to convene the House and Senate on the day of the organizational session, swear in their members, do other routine business, and go home. Thanksgiving happens two days later, meaning a special session could convene sometime in December. The Legislature has scheduled committee meetings for the week of Dec. 12, so that might be a good time to convene.

Shirvell said his and other anti-abortion groups plan to bus activists to the Capitol for the occasion. They’re also conducting a postcard campaign to encourage legislators to approve a total ban on abortion, with exceptions to protect the life of the pregnant person but not for rape or incest. He supports criminal penalties for doctors but not patients, he said.

“The biggest way we’re going to do that is when they’re all gathered together, all of them — all the state senators, all the members of the House, the governor — everybody’s going to be in on that organizational session. And they’re going to hear Florida citizens loud and clear that we want the No. 1 priority for our Legislature to be addressing the rights of the unborn in our state.”

Anna Eskamani, an Orange County Democrat who was reelected on Tuesday, said in phone interview that she’s heard nothing about extending the planned special session to take up abortion, but predicted it would arise during the regular session that begins in March.

“Obviously, having a supermajority, they can push whatever they want to push through. We will have to be ready,” Eskamani said.

The Legislature this year approved, and DeSantis signed into law, a ban on abortions in Florida after 15 weeks past the last menstrual period. A state trial judge issued an order in July blocking enforcement of the ban but higher courts are allowing it to be enforced pending an appeal.

Shirvell’s group, headquartered in Tallahassee, had called upon DeSantis in October to expand the special session to include abortion.

The Governor has indicated a willingness to “expand pro-life protections,” but ducked the issue during his reelection campaign. He had sounded a cautious note on the topic in August, noting that getting the 15-week ban through even a friendly Legislature was difficult.

“We were happy that we were able to achieve it. And so, you know, we look forward and we welcome future endeavors. But we realize there’s still going to be a fight on the legal end on that,” he said at the time.