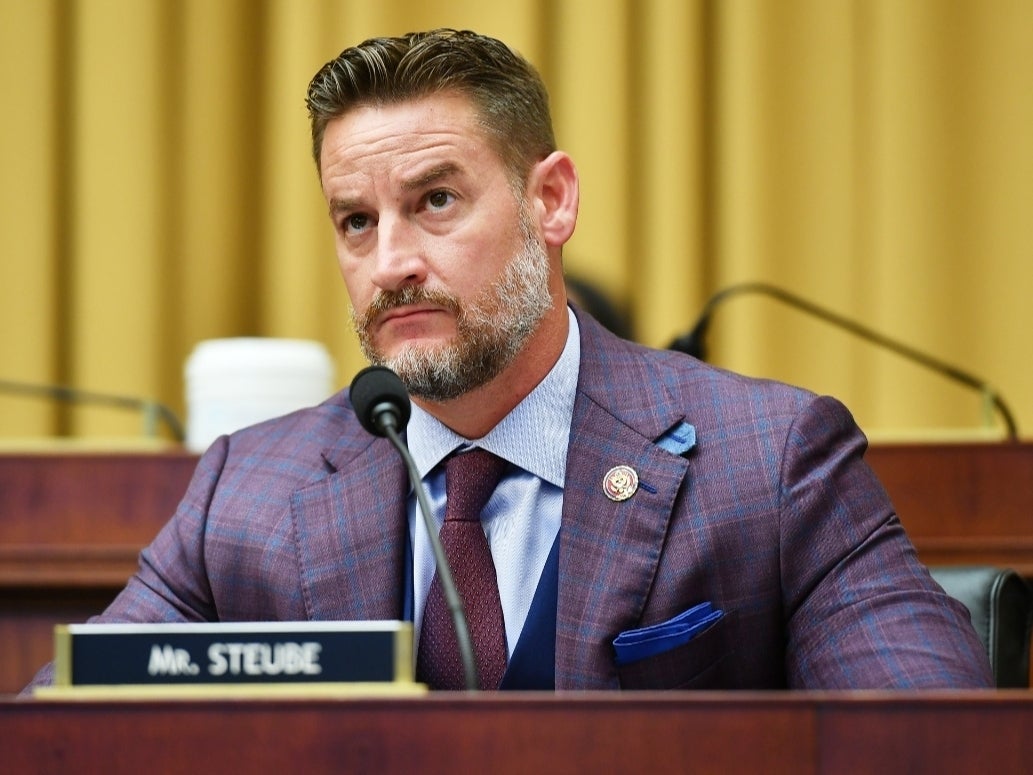 He fell about 25 feet before being transported to a Sarasota hospital.

U.S. Rep. Greg Steube was hospitalized after a fall.

“Congressman Steube was involved in an accident on his property late this afternoon and has sustained several injuries,” reads a statement posted to social media. “We will provide additional updates when possible. Please pray for the Congressman and his family.”

The Sarasota Republican was doing routine home maintenance and apparently fell about 25 feet to the ground.

“Thank you to all who continue to pray for Congressman Steube. The Congressman was knocked approximately 25 feet down off a ladder while cutting tree limbs on his Sarasota property yesterday afternoon,” reads a thread of official tweets.

“The Congressman spent the night in the ICU where several serious injuries are still under assessment but not life threatening at this time. He is making progress and in good spirits. Congressman Steube and his family would like to express their deepest thanks to the team of doctors, nurses and medical personnel treating him.”

Steube appeared through the day to progress on the road to recovery. His office shortly before 5 p.m. said the Congressman was moved out of the intensive care unit.

“The Steube family is grateful for the outpouring of well wishes and prayers. Rep. Steube was moved out of the ICU this afternoon. He remains hospitalized under the care of a great team,” read more official tweets.

“We give all glory to God for his healing. We will have more to say as details become clear about the timeline for his recovery.”

Sources tell Florida Politics that Steube was found at his home by a staffer to U.S. Rep. Vern Buchanan, a Longboat Key Republican. Buchanan and Steube represent adjacent congressional districts and serve together on the House Ways and Means Committee. Buchanan’s staffer was actually in the neighborhood doing part-time delivery work.

Steube’s office did not confirm who assisted him.

“We are thankful to the individual who witnessed the fall and immediately called 911, as well as Sarasota County’s Emergency Services for their quick response and transportation,” read the official tweets.

“Additionally, our team expresses thanks to members of the media who waited patiently to accurately report the incident before releasing falsities to the public. Accurate updates about Rep. Steube’s current condition will be found on his official Twitter account.”

A 911 call shows the individual who called found him and stayed with him until ambulances arrived. The caller described watching Steube work on branches more than 20 feet in the air, then witnessing a branch swing in a “wicked” way and knock Steube’s ladder out from under him.

The caller described significant wounds on Steube’s arm, and bruising on the Congressman’s back and rear.

“I just heard that even though Congressman Greg Steube is still in the hospital, he is doing well,” Ziegler tweeted. “Big relief to hear. Our country, state and local community needs him to recover and get back to fighting for us in Congress ASAP.”

Thursday afternoon, Speaker of the House Kevin McCarthy provided an update as well, and said the Congressman was well enough to speak to him.

“I spoke with Rep. Greg Steube and his wife, Jen, this morning,” McCarthy tweeted. “He is in good spirits, and our entire conference prays for a swift recovery. I informed him he will serve on the Select Subcommittee on the Weaponization of the Federal Government, and he is eager to get back to work!”

Steube first won election to Congress in 2018, defeating two other Republicans in a high-profile Primary, then easily winning the General Election in the deep red district.

He quickly developed a reputation as one of the most conservative members of Florida’s congressional delegation. In particular, he has made gun rights and the Second Amendment key parts of his political agenda.

His political career launched in the Florida Legislature, where he served two years in the state Senate and six in the state House. During that time, he pushed against restrictions on property rights such as limits on use of homes for vacation rentals. He also advocated for the ability for individuals to bring concealed weapons into public locations, including courthouses.

Before holding office, Steube served in the Army as an Airborne Infantry Officer and later as a JAG Corps Officer. He served as the Chief of Detainee Operations for Multinational Division North in Iraq with the 25th Infantry Division.

He comes from a political and law enforcement family in Southwest Florida, where father Brad Steube served as Manatee County Sheriff for years.

Steube and his wife, Jennifer, have one son, Ethan.

Other elected officials expressed concerns for Steube and wished him a speedy recovery.

“Please join (my wife) Ann and me in wishing Greg a speedy recovery,” tweeted U.S. Sen. Rick Scott, a Naples Republican. “We’re keeping him and the Steube family in our prayers.”

“Please join me in wishing my friend and colleague, Rep. Greg Steube a speedy recovery,” tweeted U.S. Rep. Gus Bilirakis, a Palm Harbor Republican. “I’m keeping him and the entire Steube family in my prayers!”

Buchanan wrote, “Horrible to hear about Rep. Greg Steube’s accident earlier today. Sandy and I are keeping him and his family in our thoughts and prayers and wishing him a very speedy recovery.”

U.S. Rep. Byron Donalds, a Naples Republican, also chimed in with kind words. “Erika and I are praying for our friend and fellow Southwest Floridian, Congressman Greg Steube, and his family during this difficult time,” he tweeted. “You’re one of the strongest people I know, and I have no doubt you’ll overcome this. Prayers up, SWFL!”

“Prayers for your speedy recovery, slugger!” tweeted U.S. Rep. Scott Franklin, a Lakeland Republican who picked up much of Steube’s old district in redistricting.

From South Florida, U.S. Rep. Carlos Giménez, a Miami Republican, posted, “Lourdes and I are praying for a speedy and full recovery for our colleague and fellow Florida delegation Member, Congressman Greg Steube.”

U.S. Rep. Anna Paulina Luna, a St. Petersburg Republican, posted, “Andy and I are praying for you. This is so horrible.”

In a show of bipartisan support, U.S. Rep. Jared Moskowitz, a Parkland Democrat, tweeted, “Hoping my friend is okay. Praying for him and his family.”

“Wishing Rep. Greg Steube a speedy recovery,” added U.S. Rep. María Elvira Salazar, a Coral Gables Republican. “We will be praying for you and your family during this time.”

Another well-wish from across the aisle came from U.S. Rep. Darren Soto, a Kissimmee Democrat. “Our team is keeping Congressman Steube and his family in our thoughts and prayers,” he tweeted. “We wish him a speedy recovery.”

Correction: A prior version of this story said Steube fell from his roof.