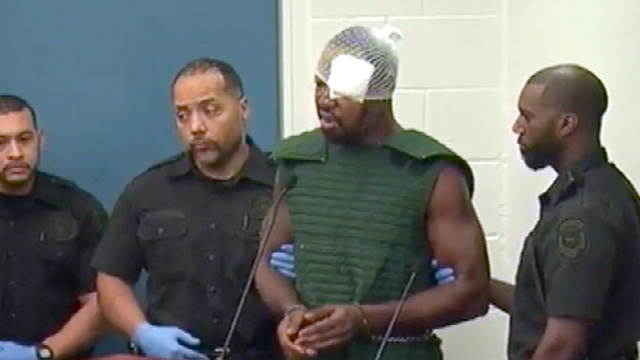 Accused cop-killer Markeith Loyd has been cited for two more offenses; but unlike the murder charges he faces, if he challenges the new charges he likely would beat them: red light running tickets.

The tickets, issued because of evidence gathered by red-light cameras in Orlando, were both for dates when Loyd already was in jail, charged with first-degree murder for the slayings of Orlando Police Department Sgt. Debra Clayton this past January and for Loyd’s pregnant girlfriend, Sadie Dixon in December, 2016.

Unclear is how both tickets were issued on May 15 when either no one connected the dots between the alleged traffic violator, Markeith D. Loyd, 41, of Orlando, and the alleged killer in jail, Markeith D. Loyd, 41, of Orlando, or no one cared that Loyd could not have driven on those dates. The name of the Orlando official who approved and signed the tickets was redacted from records available from the Orange County Clerk of Courts Office.

Neither the city nor Orlando Police Department responded to whether anyone had been aware, before Orlando-Rising.com inquired Friday morning, that Loyd had been cited for running red lights while he was in jail. The tickets were mailed to Loyd’s home address, not the jail.

Under Florida law, red-light camera notices and violations are sent to the vehicle’s owner. One acceptable defense under Florida law: if the vehicle owner can demonstrate that someone else was in control of the car at the time of the violation.

“As a city, we must ensure we follow the red light camera state statute, per Florida law. When a violation is determined to have happened, we are legally bound to issue that citation. Per state statute, citations are always issued to the vehicle owner in first position on the registration of the vehicle,” stated Orlando Press Secretary Cassandra Lafser.

The first red light allegedly was run at 10:34 p.m. on Jan. 27, on eastbound West Colonial Drive at the Mercy Drive intersection. The second was at 6:13 a.m. on Jan. 30 on northbound John Young Parkway at the Colonial intersection. The two intersections are just a few blocks apart. In both cases, the cited car was registered to Loyd, a 1992 Buick sedan.

A critic of Florida’s red-light camera law, Republican state Rep. Jason Brodeur of Sanford, said the situation is yet another reason the law is badly flawed. It is bad enough, he said, that defendants cannot face their accusers, but now there is situation that the accusers need not consider if the defendants could have possibly done it.

“It shows me that clearly red-light camera ticket is not reliable,” he said. ‘It’s totally unacceptable that because it’s your car… you’re guilty.”

There is no indication of who was driving the Buick on those two days.