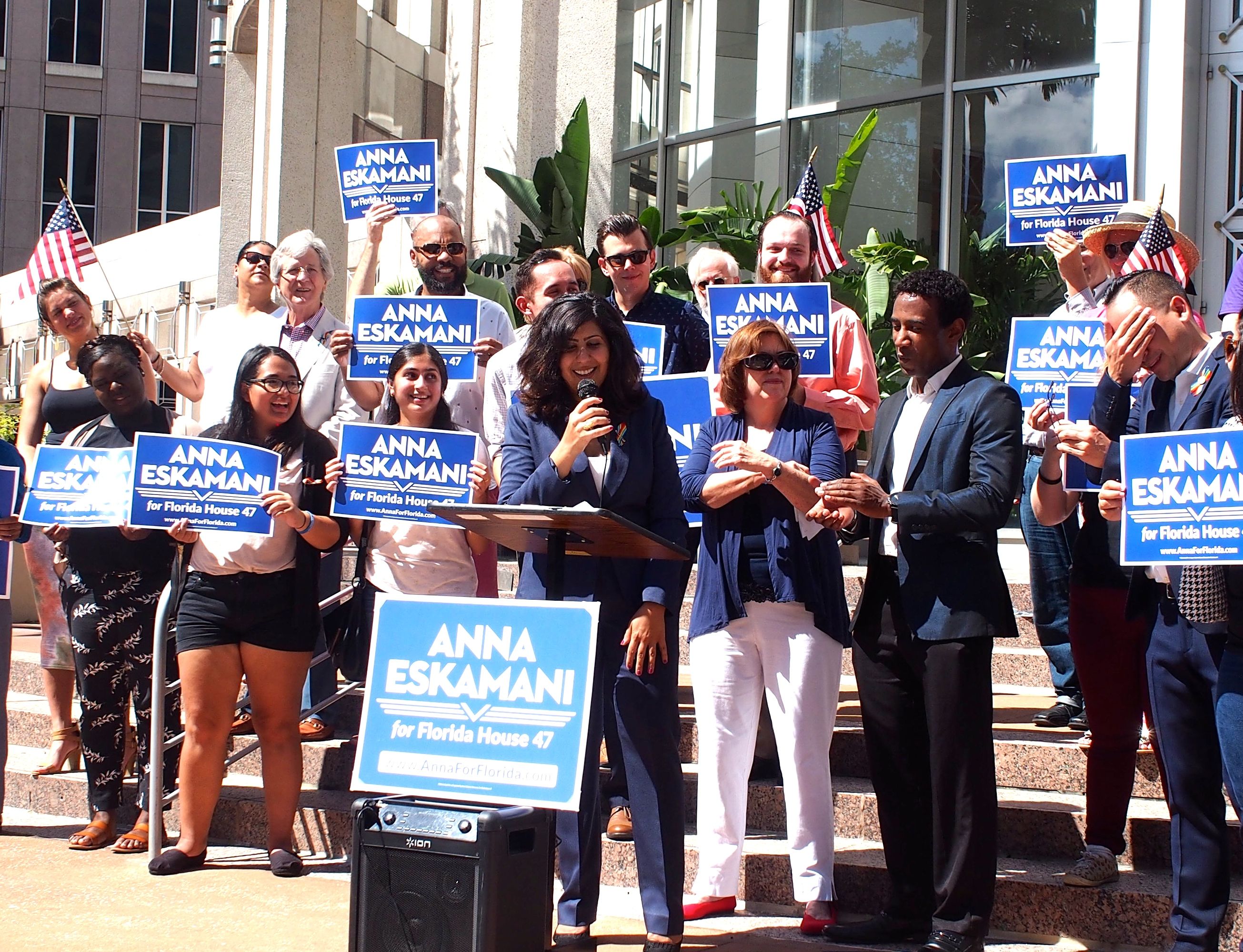 Democrat Anna Eskamani kicked off her 2018 campaign for House District 47 with a Wednesday rally at Orlando City Hall, several major endorsements, thousands of social media hits and $6,000 in donations, all gathered, she said, in the less than two days since she filed to run on Monday.

Eskamani, the first in from any party since Republican incumbent state Rep. Mike Miller announced last week he is running for Congress instead of re-election in 2018, brings with her a Central Florida grassroots network she helped build and run the past several years as a community organizer and progressive activist and Planned Parenthood lobbyist. She also brought with her former Orange County Comptroller Martha Haynie, a Republican; state Rep. Carlos Guillermo Smith; and several other early endorsements.

“I stand here today as an Orlando native and as a daughter of immigrants,” she said. “Someone who has worked relentlessly throughout her life to protect all Floridians through effective advocacy, bold leadership and and strategic management. I understand our region’s growth, changes, challenges, and potentials.”

Since late Monday afternoon, she said, her campaign has drawn 1,500 “likes” since its Facebook page debuted, and the Facebook Live video she posted drew 20,000 views. She said the campaign also raised $6,000 in small donations before it even solicited any, adding, “And you know I’ll be asking, real soon.”

The campaign also announced the endorsements of Haynie and Smith, who spoke on her behalf Wednesday, as well as Democratic state Senator Victor Torres of Orlando, Democratic state Rep. Amy Mercado of Orlando, and Henry Lim, an Orlando immigration attorney who ran for the same seat last year, losing in the Democratic primary.

Smith suggested Eskamani’s immediate entry could mirror what he did, getting into his House District 49 race in late 2015 as soon as that incumbent Republican, state Rep. Rene Plasencia, announced he would switch to House District 50. Smith raised plenty of money early and never faced a serious challenger.

In her kickoff speech, Eskamani pledged to work with that diversity, saying, “This is what Orlando looks like,” and then added she would be standing up especially “for our women and girls…. Peace and justice: that is our battle cry.”

previousRichard Corcoran's $2 million haul, and what it could mean for the governor's race