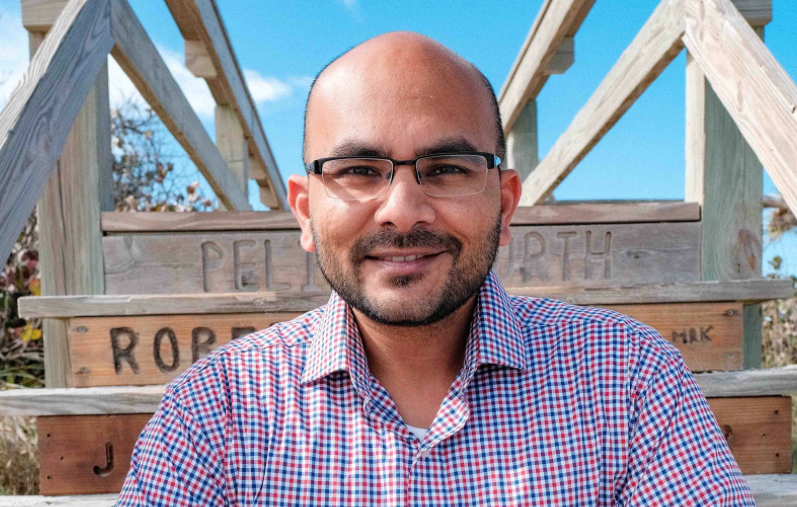 While it may be hard for many to imagine Florida’s Space Coast-based 8th Congressional District electing a Democrat, some people were saying the same thing about Democrats’ chances in many local elections in Brevard County until several won offices last November, adding dots of blue to a largely red landscape.

Stacey and Sanjay Patel had something to do with those local elections, as the 2017 chairman and state committeeman for the Brevard Democrats. Now, contending that a Democratic awakening is beginning in Brevard, Sanjay Patel, a son of India immigrants who became a business change management consultant, has filed to run for the U.S. Congress against CD 8 Republican U.S. Rep. Bill Posey.

Patel, 40, of Satellite Beach, filed in late January, the first challenger in this year for the district that includes Brevard, northern Indian River County, and far-eastern Orange County including Bithlo, Christmas and Wedgefield.

“I think we can win this thing,” Patel said.

That would be against long odds. Brevard County, the heart of the district, is 42 percent Republican by voter registration, and only 31 percent Democrat. There are no Democratic enclaves in northern Indian River nor far-eastern Orange counties that could overcome that.

Posey is a five-term incumbent who also was elected in the region to two terms in the Florida Senate and four in the Florida House. His congressional committee appointments include the House Space Subcommittee, where he has made himself a key voice for Kennedy Space Center, the Air Force, and the region’s growing private space industry. And he is a fiscal and social conservative, reflecting a constituency that voted overwhelmingly for Donald Trump in the 2016 presidential election.

Posey has never raised tons of campaign money, but has never needed to; he’s won all four of his re-elections by more than 20 points. He entered 2018 with about $600,000 in his re-election campaign.

Patel said he is determined to raise $100,000 in the first quarter to establish his campaign. And while he has no staff yet, except a treasurer, he said he’s building a team now and hopes to announce some of his campaign advisors and members soon.

Yet his first strategy may involve the grassroots seeds he and Stacey Patel already have planted, in what he said was an effort to rebuild the Democratic Party in Brevard County last year. They quit their work and have worked full-time – more than full-time, he said – running the party in the past year, and developing new volunteer networks.

“It’s going to be about boots on the ground and motivating folks to get out to the polls,” he said. “I want to do a lot of door-knocking. If we get out and turn out the vote, we’ve got a shot.”

Patel was a delegate for Bernie Sanders at the 2016 Democratic convention. He said he will be building his campaign positions as he talks with CD 8 voters. Still, his initial platform starts firmly with his belief in progressive Democratic values, much aligned with Sanders’ calls for social, economic, and environmental justice.

Patel’s political beliefs began through family matters. His parents immigrated from India to Los Angeles and overstayed visas, but were awarded amnesty and citizenships in the 1980s under President Ronald Reagan. They worked at low-wage jobs and sent Patel and his three siblings through college, he said, cementing his beliefs in immigrants and the American Dream.

“For me, what I’m watching unfold currently on the national stage is we have got to fix our immigration system, and I will work to reform that system to make sure it protects Americans, but even more importantly [to protect] what it means to be an American,” Patel said.

One of his brothers recently died of cancer, and watching him go through that, Patel became committed to also addressing the nation’s health care system.

As a Brevard County resident, he’s also watched with concern as Florida’s environmental issues emerged in recent years leading to serious degradation of the Indian River Lagoon and other waterways.

“Do we want to protect our land and our air and our water, and is that an important thing to you? I think we can craft policy around that. My ideals are Democratic ideals. That’s really where I’m going to be focusing my campaign,” Patel said. “It’s about social economic and environmental justice.”