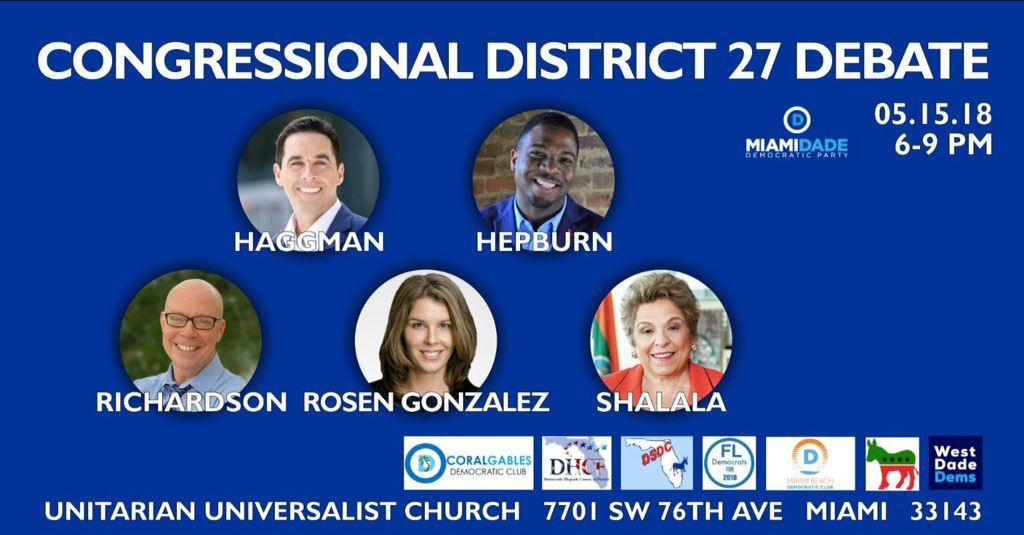 Tuesday night will feature the first primary debate between Democrats in Florida’s 27th Congressional District. This is seen as a high-priority race for Democrats, who hope to take over the House in November. The New York Times even called it “the best Democratic pickup opportunity in the country.” That’s in part because longtime Republican incumbent Ileana Ros-Lehtinen is retiring, making it an open race.

That means a lot of attention will likely be paid to this contest throughout the election season. Five Democrats are running for the CD 27 nod: Kristen Rosen Gonzalez, Matt Haggman, Michael Hepburn, David Richardson, and Donna Shalala. According to promotional materials, all five were invited to attend the debate, set for 6 p.m. at the Unitarian Universalist Congregation of Miami in Coral Gables. It’s not clear if Shalala will participate.

So what should you be looking forward to? Here are five things to watch for at tonight’s CD 27 forum.

It’s unlikely we’ll get a final answer to this question after one debate night. But Democratic candidates in CD 27 are looking for any and every opportunity to take control of this primary and compete for what could be a winnable seat. A poll taken before Shalala officially entering the race showed her well ahead of the field. But that poll shouldn’t be taken as gospel for a few reasons. First, some of her opponents in that poll have since dropped out, and it’s not clear whether their support went to Shalala or other candidates. Second, many voters in that poll had no opinion of most of the candidates. An impressive showing by one or more of the other four could start the process of convincing voters that they deserve the nomination over Shalala.

2. Do the candidates play nice?

It’s the classic dilemma for any party during a primary season. Candidates need to separate themselves from the field, and that includes criticizing their primary opponents. But slam the eventual winner too much, and you’ve just served up a heap of attacks ready to be used by your nominee’s general election opponent. Will the Democrats keep their criticisms civil? Or will they take the gloves off?

3. What issues will be at the forefront?

It’s still early in the primary season so it will be interesting to see whether the topics focus more on state and local concerns or whether national policy debates will take up most of the time. Yes, there are enough issues impacting Florida to fill up the scheduled debate time, such as the recent shooting in Parkland, President Donald Trump‘s recent decision to revoke temporary protected status from several immigrant groups with a presence in South Florida, and the impact of global warming. But with recent news about North Korea and Iran and a GOP tax bill going into effect this year, candidates could be asked to focus on a wider array of issues.

4. How far left will candidates try to position themselves?

This is a question that will repeat itself in Democratic primaries throughout the country. Do candidates run left to motivate the base at the risk of alienating moderates? Or do they assume the base will turn out in a highly-charged political atmosphere, and thus run more to the middle to draw in swing voters? CD 27 skews blue now that Ros-Lehtinen is out of the running. Will that embolden candidates to throw more red meat to the base?

It’s the elephant in the room. And with Trump’s approval ratings sub-50 percent, Democrats probably like it that way. But will the candidates try to attack the Republican president this early in the primary? Will anyone bring up impeachment, despite Minority Leader Nancy Pelosi‘s desire to put that idea to rest? Or will they focus on their own policy proposals and save the Trump bashing for the general? No doubt the president will be a factor at some point, it’s just a matter of whether that time is now.