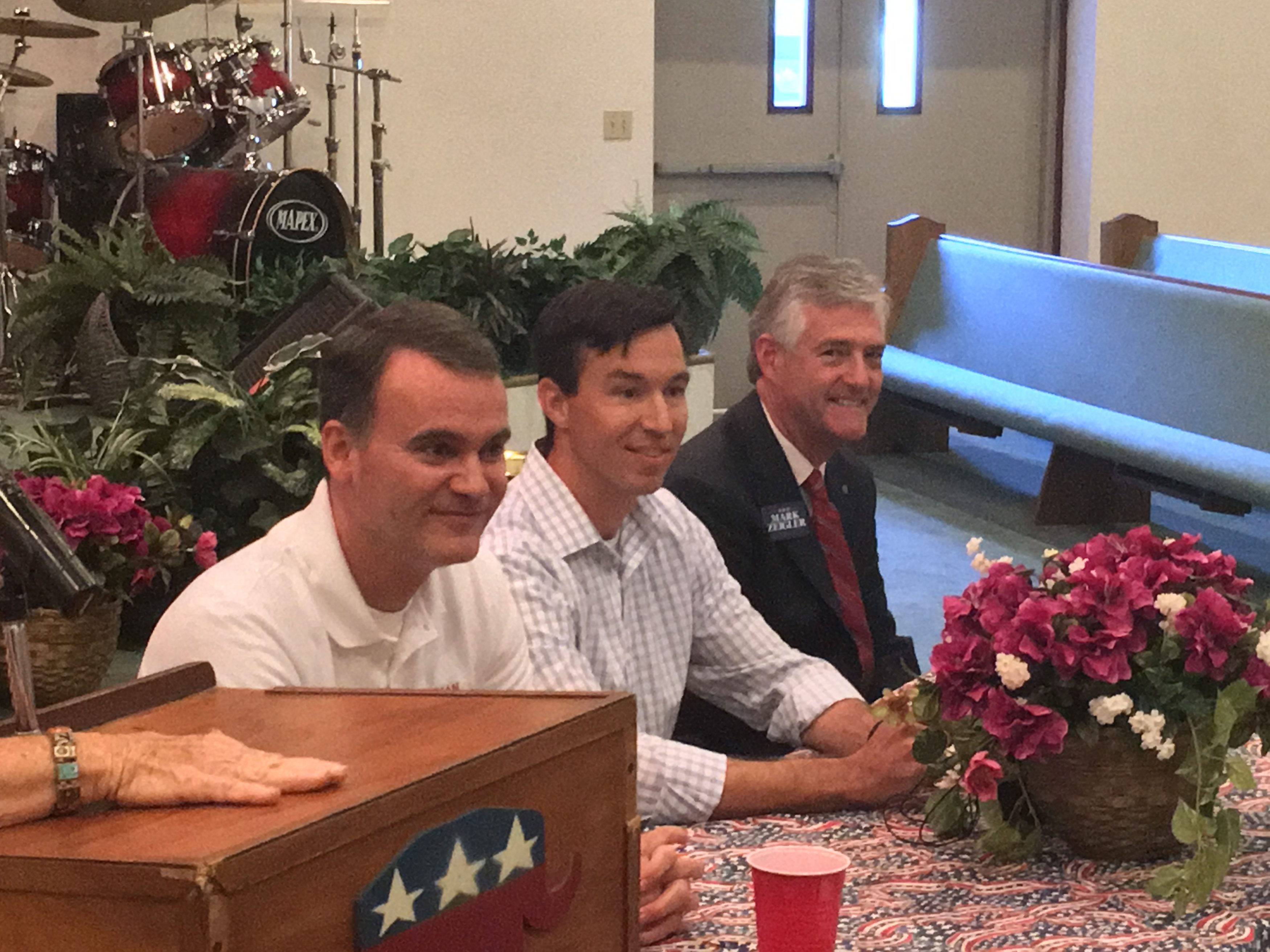 Consultants described this forum, held at a church deep in the Westside (“the most conservative church in Jacksonville,” per moderator Raymond Johnson) on Old Middleburg Road, as “the tip of the right wing spear.”

The intro urged voters that “if the candidates don’t have your Christian values, you know what to do.”

You get the idea: After the spaghetti dinner, red meat was the dessert.

The candidate speeches soon began, with Duggan explaining his legal field (lobbying for private property owners), and extolling the performance of GOP governance over the last two decades. Duggan tempered the optimism by noting that Duval schools are worse than those in the bedroom communities, and that HD 15 has the highest sheriff’s office call rate in the city.

Duggan rattled off a list of endorsements, including Clerk of Courts Ronnie Fussell … and excising the very Republican Mayor Lenny Curry (a measure of the religious right thinking Curry sold them out by not vetoing an expansion of LGBT rights).

(Interestingly, that was the second diss of the Republican Mayor that evening. Earlier, Mayoral candidate Jimmy Hill got applause for saying he was running against Curry to “correct the mistake” of backing him three years prior.)

Duggan faced questions, including about Fussell voting for the inclusion of Parvez Ahmed to Jacksonville’s Human Rights Commission.

Hogan was next up. His stump speech had the virtue of brevity, leading to questions about the 2nd Amendment (he supports it, including for people under 21). He also supports school vouchers, a “good thing for Duval County.”

When asked about “national monuments being torn down,” Hogan misinterpreted the question, which was intended as one about Confederate monuments. Once he figured it out, he said “you can’t whitewash history.”

Hogan’s endorsement of Democrat Alvin Brown over Lenny Curry did not come up.

Zeigler was next up.

Zeigler also noted the transience of State Reps., noting Davis “took a six-figure job at the Chamber,” and Fant “decided to run for Attorney General.” He also swiped at Rep. Reggie Fullwood for seeing his career truncated by a wire fraud plea deal.

Zeigler punted on a question about Visit Florida and Enterprise Florida, saying he didn’t know enough about it to answer. He was, however, able to take a position against the legalization of a pill facilitating assisted suicide.

“I do not care for that,” meanwhile, was his response to a question about sanctuary cities.

From there, more questions for the candidates en masse.

On the question of the Competitive Workforce Act — a “radical LGBT rights bill” per Johnson — the candidates struggled.

“I’m not in favor of creating alternative causes of action that are duplicative or redundant,” Duggan said.

Hogan vowed to vote against it “if it’s anything like the HRO bill.” And Zeigler said he wouldn’t vote for it.

“We haven’t seen the bill,” Zeigler said, but assured the crowd all three would vote against it.

previousLast Call for 6.25.18 — A prime-time read of what's going down in Florida politics

nextJoe Henderson: For Ron DeSantis, time to dance to the Trump music