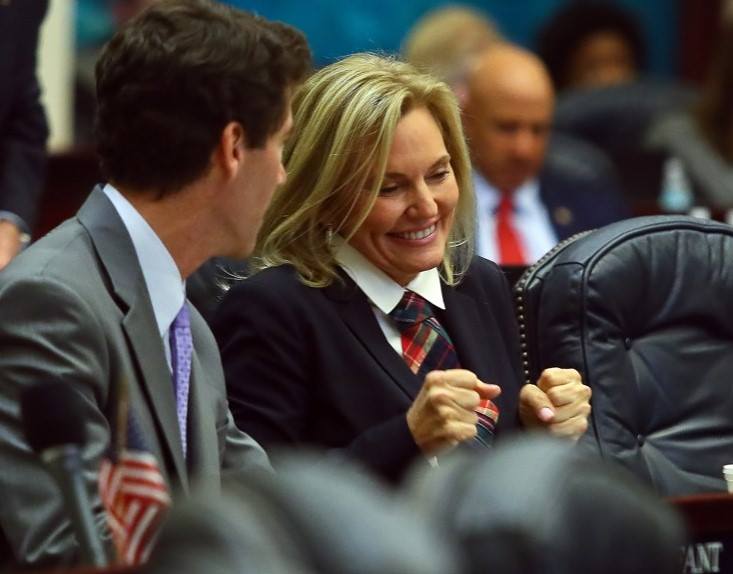 Chief among them, Ray Rodrigues spent a year building resources and support.

Fort Myers Republican Heather Fitzenhagen has sought higher office for all of 2020. But a decision to drop her bid for Congress to run for state Senate means completely rebooting her campaign.

“The way I look at it, it really doesn’t matter,” the state Representative said. “It’s always just me making sure the voters understand what I am all about.”

And she leaves a federal primary field that had 10 Republicans, an unpredictable contest observers suspect will go to a candidate receiving maybe 25% of the vote in August. Now she’s only competing against Rodrigues in the GOP primary, and the winner will face Democrat Rachel Brown in November. That’s at least simpler math and a case to make between binary choices.

But there are plenty of obstacles that come with the move. The most obvious remains money. Through the first quarter of 2020, Fitzenhagen raised $110,790 in her bid for Congress, and she started April with $89,839 hand.

That’s pretty much all off limits now. Unlike transferring between state and local offices, Fitzenhagen’s two recent campaigns are governed by competing federal and state law, so accounts can’t simply be shifted.

Nancy Watkins, a campaign finance expert who has served numerous state and local campaigns, confirmed Fitzenhagen’s federal account could write a single $1,000 check, the maximum allowable donation from an outside entity to a state campaign, to Fitzenhagen’s newly created state Senate account. But that’s it for the 2020 cycle.

As for the rest of the money, Fitzenhagen said she’s preparing to donate many of those dollars, and will likely ask donors if they will support her Senate race.

Notably, Watkins said Fitzenhagen isn’t obligated to return all the money. Any dollars donated for the congressional general election must be returned within 60 days of withdrawing her candidacy, from last Thursday in this case. But that applies just to money individuals gave in excess of $2,800.

The first $2,800 donated by any source technically counts as a contribution to her primary campaign. If Fitzenhagen keeps her federal account open, she can sit on those dollars for years, potentially using it later to run for federal office in a different cycle.

But that’s the future, and Fitzenhagen needs resources for a Senate campaign now. The next reporting deadline will reveal how successful she proves at that task in the early days of her Senate candidacy.

But she does have access once again to a political committee associated with her state candidacy. For A Better Florida hasn’t raised any money since January, shortly after she threw her hat in the ring for a federal office. But it still has $82,969 in cash waiting to be spent.

All that said, Fitzenhagen’s greatest obstacle comes from jumping into a primary against Rodrigues, a politician who served in the House with her the same number of years and draws from the same local political network. He boasts the support from regional leaders like outgoing District 27 Sen. Lizbeth Benacquisto.

Passidomo, a Naples Republican who worked closely with both candidates, was irked by Fitzenhagan’s entrance.

“I’m very disappointed,” Passidomo said. “It’s been a very busy election season, and we told everyone we did not want to have primaries. We want to focus our energies on November.”

Rodrigues has suddenly gone from the prospect of election to the Senate without any opposition to facing competitors in the primary and general.

Progressive groups aiming to field a Democrat in every legislative seat this year drew community organizer Rachel Brown into the fray, but the district still leans heavily Republican. With Fitzenhgaen in the contest, Rodrigues and his allies will now have to use resources to make it to the general.

That said, Rodrigues boasts a sizable war chest. In addition to raising $409,666 for his campaign account, Rodrigues controls two political committees. At the start of June, Friends of Ray Rodrigues reported $504,656 in cash on hand. Free Markets for Florida sported $98,104 at the ready.

Both would have more money but for the fact Rodrigues in recent months diverted campaign money toward various House and Senate races around the state.

In a sense, that shows why his funding presents a two-fold challenge to Fitzenhagen. First, he has more in the bank. Second, there are forces in Tallahassee who may resent her running and redirecting Rodrigues’ attention back to a safe Southwest Florida seat.

Of course, there are plenty of sources on the sidelines who may be itching to get into the fight. Reports that Sen. Gary Farmer tried to push Brown out of the race to create an open primary between Fitzenhagen and Rodrigues already reveal there are forces in Tallahassee who would like a different outcome than the one that seemed forgone just a month ago.

For the moment, Fitzenhagen is busy building up a new campaign team, though she jokes she didn’t have a large congressional team in place before exiting that contest.

She did work with Tampa-based consultant Anthony Pedicini, who will not work on Fitzenhagen’s Senate race.

“It’s impossible,” he said. “She’s running against an endorsed candidate of the FRSC. I love her. She’s a great lady, but this is not the race for her,” he said.

Few argue she enters the primary an underdog. That said, five opponents in the congressional primary she left behind boasted more cash on hand than her at the start of April.

“I thought she was still a viable contender for Congress,” he said.

Looking at District 27, Rodrigues has put efforts into boosting his name recognition, which is much stronger than Fitzenhagen’s in the southern portions of Lee County, Bergerson said. As a former House Majority Leader, he has earned plenty of press through the years, and he has already corralled the endorsement of most Republican movers and shakers who may be reluctant so close to the primary to jump ship.

That said, Bergerson sees advantages for Fitzenhagen in the Senate race. She’s a female lawmaker running to replace another woman in the Senate. She has experience on the campaign trail and knows the northern portion of the district well. “It will be a very competitive race,” he predicted.

An internal Republican poll from January 2019 also included findings that should give Fitzenhgaen heart.

Before any candidate stepped forward and said they would run for Benacquisto’s seat, the poll looked at support in a hypothetical three-way primary between term-limited lawmakers who might run for Senate. That found Cape Coral Republican Dane Eagle, now a candidate for Congress, leading with 24%, but showed Fitzenhagen with 15% and Rodrigues with just 9%.

Moreover, a head-to-head matchup between Fitzenhagen and Rodrigues at the time showed the Fort Myers Republican leading her Estero colleague 25% to 19%.

What that means after Rodrigues spent hundreds of thousands campaigning over the last year while Fitzenhagen pursued a different office is not clear, though there were rumors over the past month of a new poll in the field pitting Fitzenhagen against Rodrigues in a Senate match-up. Fitzenhagen maintains she had nothing to do with that poll, and it’s results have not become publicly available.

Fitzenhagen spent much of Monday following her bombshell announcement calling up individuals who haven’t committed to anyone in the once-quiet Senate race.

She sees one advantage running in a two-person race that at least makes phone calls easier.

“I’m calling a lot of people who were conflicted donating in the congressional race with nine or 10 people running,” she said. “There was a lot of overlap in support. The same person might have allegiance to two people in the race so it was hard to get donations. So now I am going back to a lot of the people I would normally contact and talking to them again.”

If there are groups in Tallahassee interested in supporting her agenda over Rodrigues, she’s ready to take those calls too, she said.

“I care about the same things I have always cared about,” she said. “I’m just looking for the opportunity to continue work on behalf of the state of Florida.”