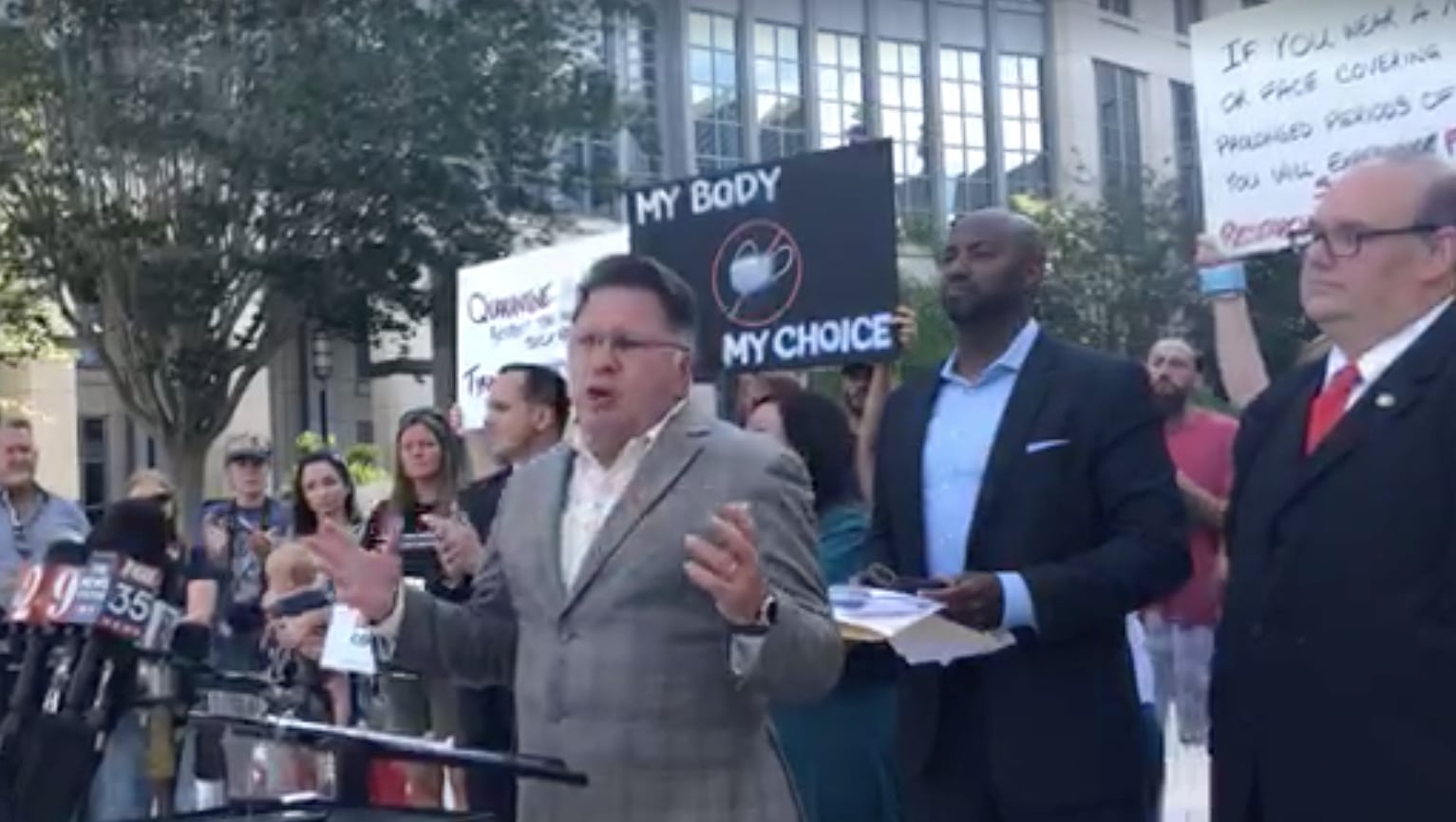 Sabatini, Stemberger, who is president of the Florida Family Policy Council, and Hart, who is chairman of the Orange County Republican Party – but who joined the suit as co-counsel saying he was doing so as an individual and not on behalf of the party – filed the suit in Circuit Court in Orange County.

Last Thursday, as Orange County’s COVID-19 caseload skyrocketed with almost daily records for newly-recorded cases, Demings signed an executive order requiring everyone in Orange County to wear face masks in public, with a few exceptions. Orlando Mayor Buddy Dyer, who said he would honor it in Orlando, and Dr. Raul Pino, Orange County’s health officer with the Florida Department of Health, who endorsed the order as necessary to try to slow Orange County’s outbreak, supported the move.

In a phone interview, Hart, a lawyer, called the order “massive government overreach” and contended it was a violation of the right to free speech.

At a press conference in Orlando Monday morning, Stemberger, counsel in the suit, charged that Demings order is not clear, and, among others, leaves church pastors wondering if they, too, must wear masks while preaching.

Demings said Thursday he was hoping people would voluntarily comply with the order and that it would not be enforced with any criminal penalties. However, he held open the prospect that if the public health crisis worsens and there are specific businesses openly flaunting the order he might reconsider.

Stemberger said the lawsuit would be dropped if Demings changed the word “require” to “recommend” for masks.

“This whole order … face masks, was just poorly done. It’s draconian. It’s confusing, it’s contradictory, and it’s unconstitutional,” Stemberger said. “I do not wish to be disrespectful, but the mayor of this county is playing games. He’s saying it’s voluntary on one hand, but on the other hand he’s saying ‘well, we may enforce it in the future, we’re not sure.”

Hart compared COVID-19 with Lyme disease, malaria, hookworm, west Nile, zika, and ebola, none of which have caused public health orders that amount to taking away people’s rights.

“And what’s really upsetting is, this is already beginning to re-affect our economy,” Hart said. “Now, I want to be clear; I’m not saying don’t take this seriously. I’m not saying, don’t be concerned. But at the same token, I’m saying, let’s trust people to exercise their rights as God has given to us as Americans.”

At his press conference Monday morning, Demings said he had not yet been briefed by the Orange County Attorney’s office on the lawsuit and so could not comment about it in any specific way. However, he defended his order, saying, “I still believe that what we are doing is a major approach in this community to responding appropriately to the current state of affairs regarding the COVID-19 virus that is raging amongst us.”

Orange County has become one of the state’s hotspots as Florida experiences a resurgence of the coronavirus outbreak. On Saturday, the county confirmed 437 new cases, which broke the previous record of 342 set on Thursday, the day Demings signed his executive order. Last week alone, through Saturday, Orange County confirmed 1,809 of the 4,914 total cases it has suffered since the outbreak began in mi-March.

A rally drawing a couple dozen people preceded the press conference out front of the Orange County Court House. Almost no one at the rally wore masks. One woman held up a sign declaring, “My Body My Choice,” borrowing the message from the abortion-rights movement that Stemberger’s organization has long opposed.