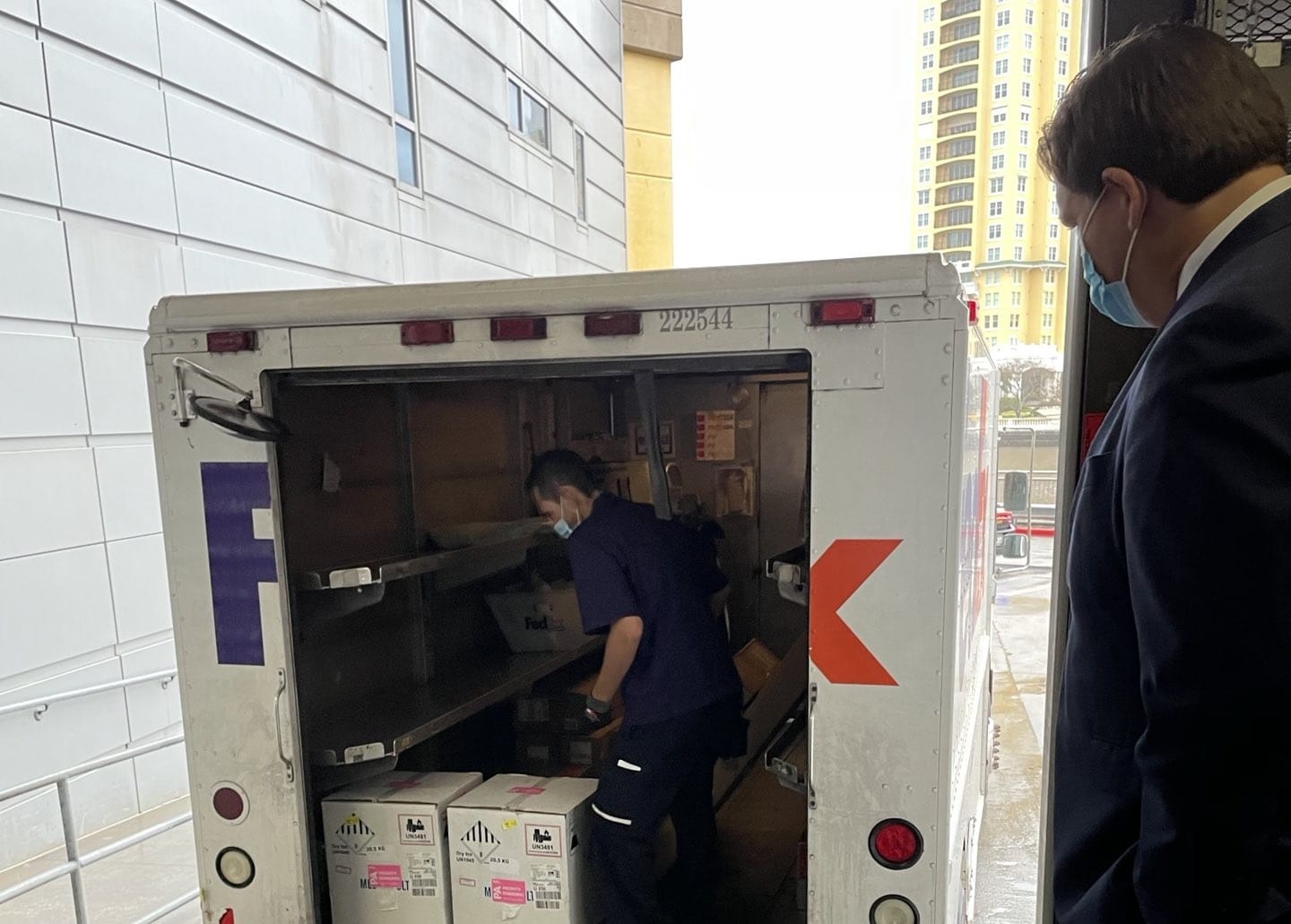 Three days after the U.S. Food and Drug administration approved the first COVID-19 vaccine for public use, hospital workers are receiving Florida’s first doses of the vaccine.

Gov. Ron DeSantis personally signed off on a FedEx delivery Monday at Tampa General Hospital, and watched as “patient zero” received the first shot of the rollout.

“Talk is cheap. Yeah we saw FedEx deliver it, we’re saying how great it is, but let’s actually get some shots in arms,” DeSantis said.

Division of Emergency Management Director Jared Moskowitz and the FDA gave the final go-ahead Friday to the nation’s first COVID-19 vaccine, marking what could be the beginning of the end of an outbreak that has killed nearly 300,000 Americans.

Tampa General, which received 20,000 doses Monday, is one of five hospitals the state selected to receive the first batch of doses. The remaining four are Broward Memorial, UF Shands in Jacksonville, Jackson Memorial in Miami and Advent Health in Orlando.

In March, the United States began Operation Warp Speed to fast track a vaccine through the development and distribution process. Experts, including one present for the press conference, anticipated the vaccine might not be ready for public use until 2021.

He outlined the current plan for the vaccine rollout in Florida, including 100,000 this week for hospital workers, 60,000 for CVS and Walgreens for longterm care and another 20,000 Tuesday for that longterm care mission. But there have been hiccups.

“Right now, we don’t know. They have kind of dialed it back. I think they’re working through some production issues,” DeSantis said.

If Florida still gets the remaining doses as planned, the state will have received a combined 1 million doses in December between Pfizer and Moderna. Without the supplemental Pfizer delivery, the Governor said the state would receive 450,000 fewer doses.

The Moderna vaccine is on a similar approval path as the Pfizer vaccine. The FDA could green-light it as soon as Friday, and Florida could receive 365,000 doses next week.

The Johnson & Johnson vaccine, expected as soon as February, requires one dose and is more easily stored.

Moskowitz tweeted pictures Monday morning showing the Governor watch a FedEx delivery at Tampa General before personally signing off on the packages. Tampa General Hospital President and CEO John Couris, who noted that the shipment was 30 minutes ahead of schedule, was also present for the delivery.

“The eagle has landed. We have the Vaccine!” Moskowitz tweeted. “A tribute to the hero’s of this nightmare, our front line health care workers.”

The eagle has landed. We have the Vaccine! A tribute to the hero’s of this nightmare, our front line health care workers. pic.twitter.com/yOlRtckGBx

The Governor also watched and celebrated as Rafael Martinez gave the first shot to Vanessa Arroyo, a nurse at Tampa General.

Hospital workers are receiving the first vaccinations to ensure that health care is delivered “uninterrupted,” the Governor said.  The general populous could receive the vaccine as soon as February.

On Thursday, DeSantis said Florida would receive 179,400 vaccine doses of Pfizer Inc.’s vaccine. But Florida received fewer than anticipated, and is at the whim of the federal government.

Shots for health workers and nursing home residents are expected to begin in the coming days after the FDA authorized an emergency rollout of what promises to be a strongly protective vaccine from Pfizer and its German partner BioNTech.

The move set off what will be the largest vaccination campaign in U.S. history — but it also has global ramifications because it’s a role model to many other countries facing the same decision.

Moskowitz’s agency has been leading pandemic response in the Sunshine State.

“If I was in a foxhole, I’d want Jared right next to me in that foxhole,” Couris said. “This guy is steady under pressure and has done a tremendous job with his team to help us navigate through all the complexities that we were confronted with for almost a year.”

Moskowitz called the rollout, which will continue months into the next year, a team effort.

nextGov. DeSantis: COVID-19 vaccines for general population could be available by February