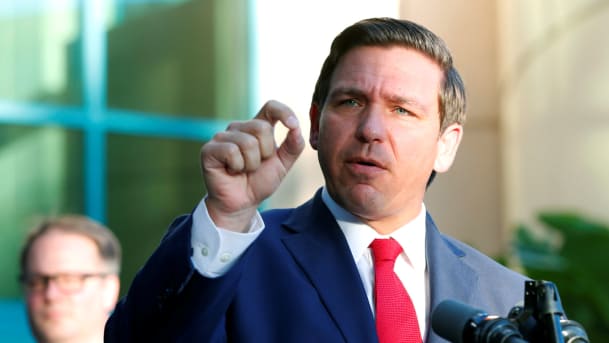 “Is the Pope Catholic?”

That was Gov. Ron DeSantis‘ response to a question Tuesday on “Fox and Friends” about whether adversarial questions and “pay to play” charges from CBS’ “60 Minutes” franchise were intended to “neutralize” him as a force in the Republican Party.

The first-term Republican returned to the Fox News Channel for the second time in 12 hours to reiterate his case that the Sunday segment was a “smear,” an intentional misrepresentation of his vaccination efforts and that, contrary to claims, $100,000 in recent donations to his political committee did not drive the decision to deploy vaccinations from Publix pharmacies.

He was also on the Tucker Carlson show Monday evening covering the same material. Given a second bite at the apple, the Governor refined his talking points, contending the segment illustrated a lack of trust people have in the mainstream press, and resuming what has been a long-running series of grievances against the corporate media.

“A lot of Americans don’t believe corporate media anymore for precisely this reason. They edited out all the key facts,” DeSantis said Tuesday morning regarding his “very detailed two minute response at the press conference” where a CBS reporter confronted DeSantis with the allegations.

“CBS cut that out and they tried to act like we weren’t trying to make it widely available,” DeSantis added.

He said there was “no deal with Publix” and it would be “malpractice not to use them as a distribution point,” especially with CVS and Walgreens “going into the long-term care facilities at the time.”

“CBS doesn’t have any facts on their side,” DeSantis said regarding the decision not to interview Division of Emergency Management head Jared Moskowitz and Palm Beach County Mayor Dave Kerner.

“So they knew if they used them they wouldn’t be able to do innuendo. All they were looking to do was a hit job on me, to try to smear me. Just because I’m in the other party than them,” DeSantis said, before invoking New York’s embattled Democratic Gov. Andrew Cuomo.

“What do they do with the Governor of New York that’s in their party? They do puff pieces, they do all of this stuff” DeSantis said of the New York based CBS.

“This is partisan corporate media,” DeSantis added. “These people, like this reporter, are basically ambulance chasers with a microphone. They are not trustworthy. They lie. They know they’re lying and we know they’re lying.”

A spokesperson defended the story, saying they “used the portion of the Governor’s over 2-minute response that directly addressed the question from the correspondent.”

Later in the day, the show released a longer statement:

The network later issued a longer statement on Tuesday.

“When Florida state data revealed people of color were vaccinated at a much lower rate than their wealthier neighbors, 60 Minutes reported the facts surrounding the vaccine’s rollout, which is controlled by the governor. We requested and conducted interviews with dozens of sources and authorities involved. We requested an interview with Gov. Ron DeSantis, he declined; We spoke to State Emergency Management Director Jared Moskowitz twice, but he declined to be interviewed on camera for our story until well after our deadline. The idea we ignored their perspective is untrue. Counter to his statement yesterday, we also spoke on the record with Palm Beach County Mayor David Kerner. For over 50 years, the facts reported by 60 Minutes have often stirred debate and prompted strong reactions. Our story Sunday night speaks for itself. “