Gov. Ron DeSantis and the Seminole Tribe of Florida are expected to announce details of a new gaming compact imminently, according to several news sources and confirmed by Florida Politics. Anchoring the deal is an agreement to give the Seminoles exclusive control of sports betting, which the Tribe would be able to offer at its own facilities as well as through pari-mutuels. It would also be allowed to negotiate deals to allow online platforms such as FanDuel, DraftKings and Barstool to operate in the state. The biggest remaining question is when the Legislature will OK the potential new compact or transfer legislation. It is possible that legislation could drop next week and get fast-tracked through the House and Senate, but it would be a tight timeline. More likely, the Legislature could call a Special Session as early as next month to ratify the deal. Here’s your nightly rundown.

Breaking ground. DeSantis reached an agreement with the Army Corps of Engineers on continuing construction of the Everglades Agricultural Area (EAA) reservoir.

Harvest time. The House took up Senate President Wilton Simpson’s priority ‘Right to Farm’ legislation (SB 88) and sent it to the Governor’s desk.

Crackdown. Senators will soon vote on a measure (SB 7072) to punish social media companies that block users and content from their platforms.

Georgia 2.0? Senators held preliminary debate on a GOP-backed bill (SB 90) to rewrite mail voting laws, with the sponsor asserting it was not akin to widely panned legislation in the Peach State.

Anchors away. After dredging up committee testimony all Session long, a seaport preemption bill (SB 426) passed the Senate with no debate.

Quiet, please. Legislation (HB 529) that would mandate a moment of silence for school students cleared the Senate Thursday, but not without contention.

Fill ‘er up. A bill (HB 839) to block local gas station bans was watered down in committee meetings, but it still faced questions from Democrats on the Senate floor during a second reading Thursday.

‘It does nothing.’ A transportation package (SB 1194) passed the Senate unanimously, but not without drawing heated words from Sen. Jeff Brandes.

Disability abortions. The House took up a bill (HB 1221) that would ban abortions based on test results showing a probable disability, readying the measure for debate and a floor vote.

What’s going on? The Senate unanimously approved a bill (HB 727) that requires officials to look into what is wrecking the Little Wekiva River in Central Florida.

“The Tribe wants to express our sincere thanks to Governor DeSantis, Senate President Simpson, House Speaker [Chris] Sprowls and many others who have worked hard to negotiate a historic agreement that cements our partnership with the state for decades to come.” — Seminole Tribe of Florida Chairman Marcellus Osceola Jr., on the potential new gaming compact.

Your Metz Husband Daughton-sponsored question of the day is: Which actor, born in Miami, was the first Black actor to win an Academy Award for Best Actor and the Golden Globe for Best Actor?

Last time, we asked: How many National Parks are in Florida?

Congrats to our very own Peter Schorsch (@PeterSchorschFL), the first person to tweet the correct answer! 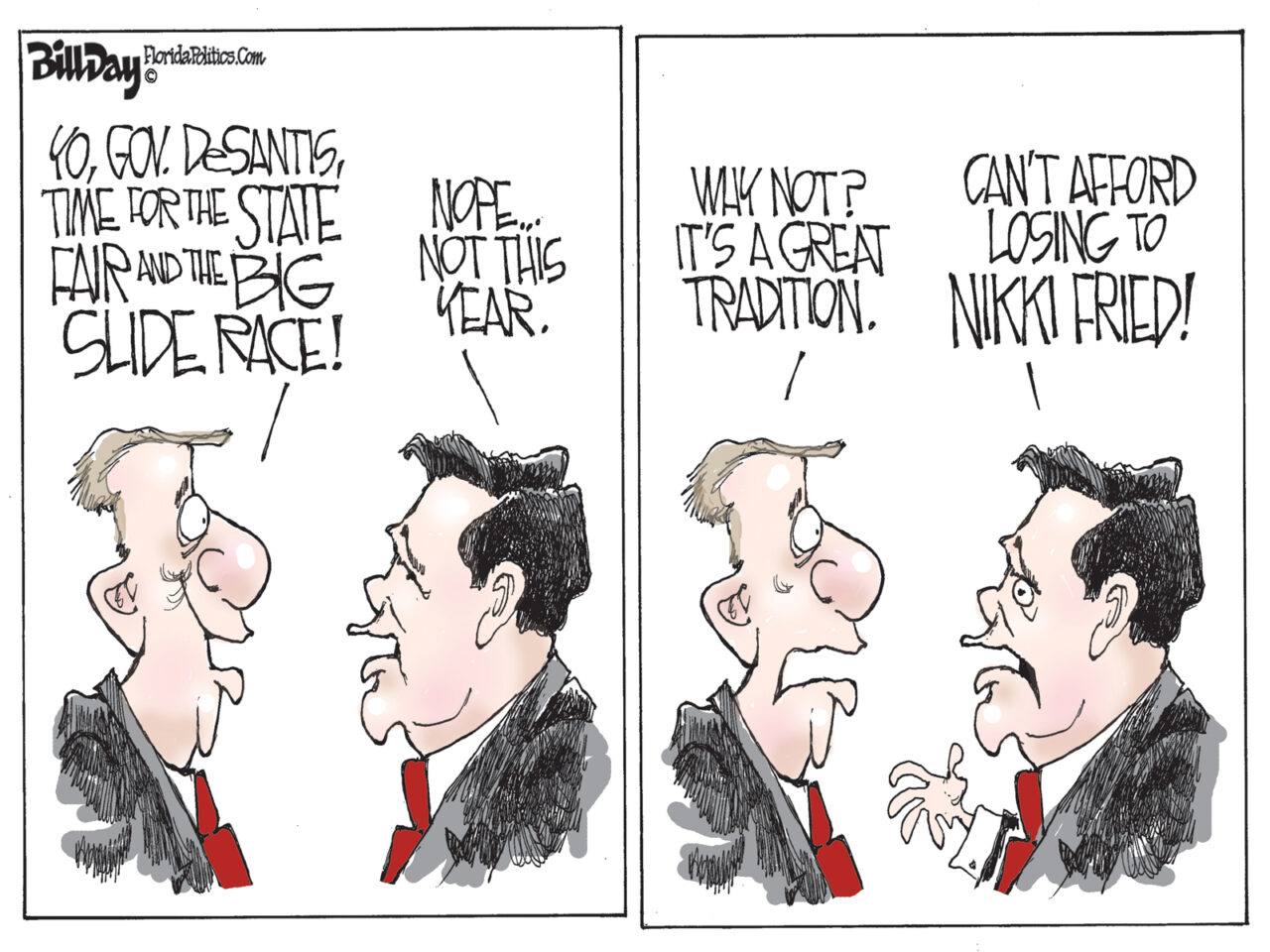 Lobbyist Lori Killinger, an executive shareholder with Lewis Longman & Walker, has been deeply entrenched in Florida’s political process throughout her career. We caught up with Killinger to speak about what it’s like lobbying during a Session when the Capitol is closed and the seemingly perennial — though not yet successful — alimony bill she works on.

COVID-19 precautions largely kept lobbyists out of the Capitol this Session. How did that affect your ability to do your job?

Killinger: Obviously, being limited from entering the Capitol has changed the way we’ve had to lobby this Session. It has certainly made an already complicated process even more complicated. Those of us, however, that have worked hard over the years to build relationships, I would imagine, have fared somewhat better in accessing lawmakers and staff in an attempt to advocate on behalf of our clients.

You worked on the alimony bill. It’s a bill that comes up almost every Session but never makes it all the way through the process. This year’s alimony bill just got temporarily postponed in the Senate. Is it going to come back up?

Killinger: The Session is always surprising, and in some ways extremely flexible, and in other ways extremely rigid, so to say “never” during this process until the hankie drops is a mistake. However, certainly, we are climbing a very uphill battle to have it move to its final stages.

You have a small team of three lobbyists that work with you, yet you work on priority pieces of legislation. How does that work?

Killinger: We present an interesting scenario in that the lobbying team acts like a small boutique lobbying firm, which means all three of us focus on all of our clients’ issues together. We are a true team. However, because we are a major statewide law firm with offices in five cities in Florida, we have the backing and infrastructure that goes along with that. So, our clients not only get the support of a law firm through legal assistants, paralegals, et cetera, they also get support of the expertise of our other lawyers should they be needed to help address issues of concern to our clients. For me, I believe it’s a great mix for our clients to have the focus of a small boutique firm with the backing and infrastructure of a major statewide law firm.

A late-Session gaming deal that isn’t a mirage?

Those who’ve been around the block a few times know better than bank on it, but it looks like Lucy’s finally holding the football down with the laces out.

The potential new Seminole Compact would allow the tribe to offer craps and roulette at its facilities and allow pari-mutuels to keep offering designated player games. Combined with the decoupling bills — which are unrelated to the compact negotiations — and it’s a coup for jai alai frontons and former dog tracks alike.

But sports betting is the headliner.

The deal would give the Seminole Tribe of Florida the authority to offer sports wagering at its seven facilities across the state, oversee sports betting at pari-mutuels and even enter into deals with the major sports betting platforms.

FanDuel and DraftKings are two of the biggest platforms in the business, and they’ve been hoping the third-largest state legalizes sports betting for years. Five years back, the platforms were in talks to merge, but the deal was blocked, and they remain competitors.

But in Tallahassee, they’re on the same team, each having the same slate of lobbyists. Their roster: Brian Ballard and Brady Benford of Ballard Partners, Jeremy Kudon and Michelle McGann of Orrick Herrington & Sutcliffe, and Marc Reichelderfer of Landmarc Strategies.

Another big-timer is Barstool Sportsbook. The sports betting app is part of a strategic partnership between gaming companies Penn National and Barstool Sports, a leading digital sports, entertainment and media platform. Earlier this Session, Penn National got off the sidelines and hired Alan Suskey and Donovan Brown of Suskey Consulting. 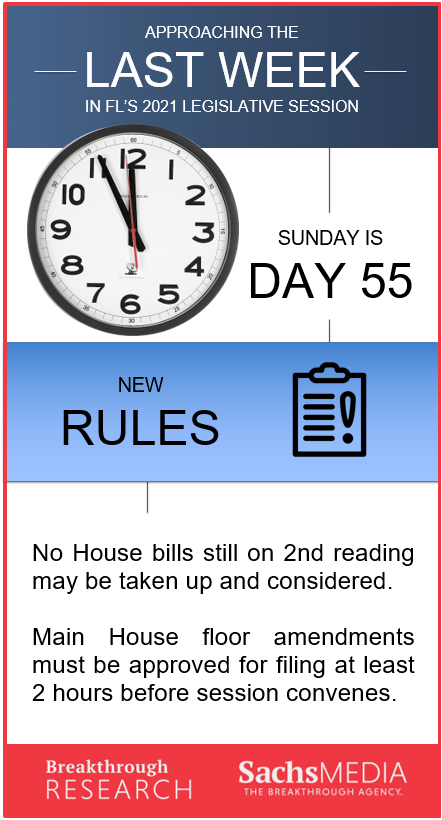 The House Commerce Committee will take up the sweeping property insurance reform bill (HB 305) that was postponed in committee earlier this week. The committee meets at 8:00 a.m. in Room 212 of the Knott Building.

The House will hold a floor session at 10 a.m. The agenda includes bills that would regulate pharmacy benefit managers (HB 1155), place a limit on contributions to committees supporting proposed ballot amendments (SB 1890), and a policing reform package (HB 7051).

The House Rules Committee will meet at 5 p.m. in Room 404 of the House Office Building.

nextNon-compact gaming legislation stalls, could be pushed to Special Session