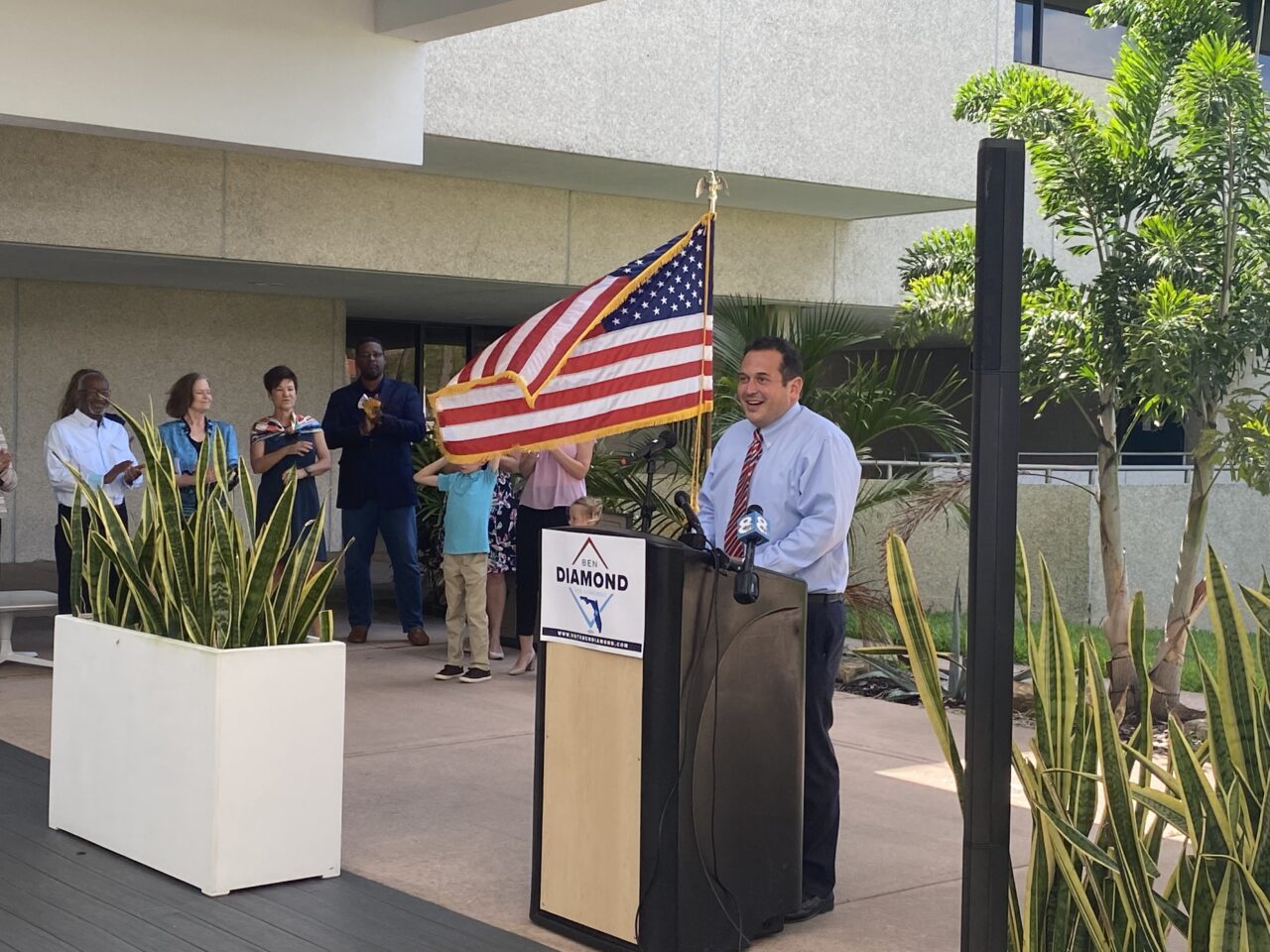 “I feel a responsibility to acknowledge this moment,” the Pinellas County Democrat said. “I can’t sit idly by.”

“Ben is going to do what’s right for us, and I know that,” Gerard said Monday before introducing Diamond.

“We all know that he has been fighting for us, working to protect us and protect our voting rights, working to address sea level rise and creating an economy that works for everyone,” Driscoll said. “The sun shines more brightly in St Petersburg because of Ben Diamond’s work.”

Diamond made sure to pay tribute to incumbent Charlie Crist, who is vacating the CD 13 seat to run for Governor.

Crist made his announcement Tuesday with Diamond by his side.

“I also want to thank a friend who could not be here today, Charlie Crist, who has dedicated his life to public service and has represented this congressional district with grace and humility,” Diamond said. “It was great to be with Charlie last week as he kicked off his campaign for Governor, and we wish him well.”

Diamond discussed this past Legislative Session in his address, hitting on controversial legislation like the recently signed anti-riot bill, a bill to ban transgender athletes and the handful of preemption proposals.

“I respect my colleagues regardless of their backgrounds or their political party. I rely on science and facts to make my case for sound public policy,” Diamond said Monday. “But I have also been absolutely unafraid to fight back for our fundamental Democratic values and fight for our principles when they are threatened by what I see as a radical or dangerous agenda.”

“I remain eager to build consensus and work with both Democrats and Republicans to meet Florida’s biggest challenges — but I will never compromise on my core beliefs or our constitutional rights,” Diamond said. “In Washington, I will continue to advocate for the same priorities as I have in Tallahassee that are so important to our community.”

Diamond, who was slated to become House Democratic Leader from 2022 to 2024, is the second Democrat to enter the race for CD 13. Diamond will face Eric Lynn, a former national security adviser in former President Barack Obama’s administration who announced his campaign Wednesday. Ahead of Diamond’s official announcement Monday, Lynn announced he raised $100,000 in his first five days on the campaign trail.

The race also includes Anna Paulina Luna, who also joined the race last week. The GOP firebrand — who gave Crist a run for his money last year — ran, among other things, as a pro-cop candidate who took every available opportunity to bash Crist as socialist and anti-law enforcement.

“This will be a tough race. It will be one of the most competitive congressional races in the nation — and one of the most expensive,” Diamond said. “I expect you will see outside forces with unfamiliar names flooding your television with breathless ads and wild claims. But it is critical that a Democrat continues to represent House District 13.”

And with redistricting on the horizon, Republicans leading the process could narrow that even more by shifting district boundaries northward. While they may be reluctant to get too creative with redistricting after the Florida Supreme Court foiled their last attempts to draw a map favorable to the GOP, the current Supreme Court is far more conservative.