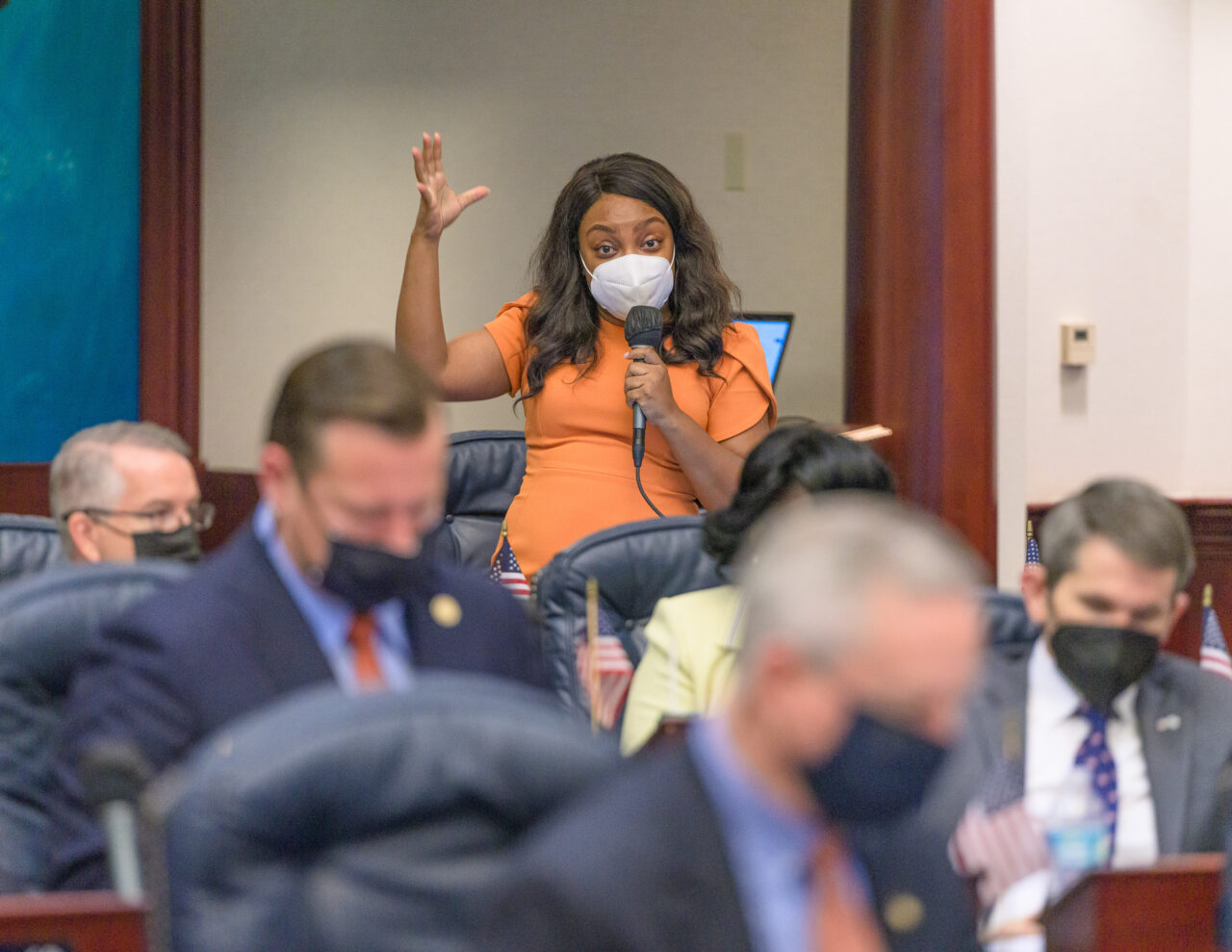 "Their law does nothing to address actual voter fraud, because they don't care about that."

Republican leaders have lauded the 2020 election as being among the smoothest and most secure in Florida’s history, but you wouldn’t know it by their actions, according to Democratic state Rep. Dotie Joseph, who said Tuesday that a new state law won’t curb real voter fraud and instead kowtows to former President Donald Trump‘s unsubstantiated claims of widespread voter fraud.

In early May, Gov. Ron DeSantis signed SB 90, which among other actions, limits the use of absentee ballot drop boxes, restricts who can collect and deliver ballots to polling places, and expands existing rules against attempts to solicit votes near polling places, including prohibiting outside groups from distributing food and water to voters in line.

But Joseph said no stricture in the heavily partisan bill would have stopped the only case of voter fraud in Florida’s last election cycle that resulted in an indictment: the alleged propping up of a sham third-party candidate whose last name’s similarity to that of incumbent Democratic Sen. José Javier Rodriguez helped to siphon off enough votes to secure a razor-thin win for Republican challenger Ileana Garcia.

“Their law does nothing to address actual voter fraud, because they don’t care about that,” Joseph said. “Instead of addressing actual voter fraud, they enacted legislation to make it harder for both Democrats and Republicans to exercise their right to vote, from decreasing access to drop boxes to making it harder to vote by mail — both measures of which were used at an unprecedented level in the last election and empowered voters to safely and conveniently cast their vote.”

Joseph went on to call out Florida Republican lawmakers for acting against voters’ wishes in 2018, when more than 64% of the state electorate approved restoring voting rights for most convicted felons who completed their sentences, including parole or probation.

The following year, state Republicans tacked on an additional stipulation that felons must satisfy all legal and financial obligations, including fees and restitution, before they can vote. An appeals court later upheld the move.

“To put this into context, in the entire United States, of the people who cannot vote because (of) a criminal record, over 24% of them reside in the state of Florida,” she said. “If that’s not a 14th (Amendment) equal protection violation, I don’t know what is.”

Much of the discussion centered on two bills at the federal level with strong Republican opposition.

One of the two new bills, the John Lewis Voting Rights Advancement Act, aims to update and restore protections from the Voting Rights Act of 1965, which Congress last reauthorized in 2006 but was “gutted by the Supreme Court in 2013,” a summary from the office of sponsor Sen. Patrick Leahy said.

The Supreme Court last month undermined a key section of the 1965 act meant to bar voting restrictions with racially discriminatory impacts, a move that will “permanently hobble” the act just as the number of minority and young voters it would protect is surging, Abrams said.

The other new bill, the For the People Act, would make Election Day a national holiday, add more vote-by-mail options and protections, restrict voter purges, mandate same-day registration, require states to automatically register voters when they sign up for certain services and licenses, including at the DMV, and expand early voting to 15 days before an election.

The U.S. House approved the bill in March. Republican U.S. Senators blocked it June, when Democrats couldn’t overcome a filibuster.

“Republicans watched their power start to wane, and they saw the demographics shifts in this country start to take place,” Abrams said. “We saw rules and laws challenged in the 2020 election cycle that made it easier for people to cast lawful votes …  and unfortunately there is a minority that does not like that and will not countenance it, and they’re doing their best to shut the door.”

With gridlock on the issue persisting in Washington, “states are the battleground in the fight for voting rights,” Podesta said.

Almost 400 bills across 48 states have been introduced to restrict access to ballots, he said. Of those, 28 passed by the end of June.

“We have an epic battle on our hands,” he said. “Laws are being passed by Republican-controlled legislatures who continue to indulge in the former President’s ‘big lie’ allegations. Not only are the accusations false; they’re dangerous and anti-democratic, and we’re seeing the consequences of his lies and the lies of other detractors of democracy play out in real time.”

That should alarm Miami-Dade’s large Haitian and Cuban populations for which the memory of authoritarian rule and voter suppression are hardly distant memories, said Joseph, a Haitian immigrant.

“I come from a state with a significant number of immigrants, including Cubans and others who have fled from regimes and countries in search of freedom and opportunity. Key among that freedom — libertad, libète — is being able to exercise your right to vote,” she said. “If you’ve been paying attention, these are the same cries that you hear in these other countries, which we’re hearing now. When you have people charging and storming our nation’s capital with insurrection, it’s the same foolish overthrowing things we see in these other countries. I don’t want to see the United States turn into some bootleg banana republic that these people are trying to make it in this fleeting attempt to hold onto power that they no longer have.”