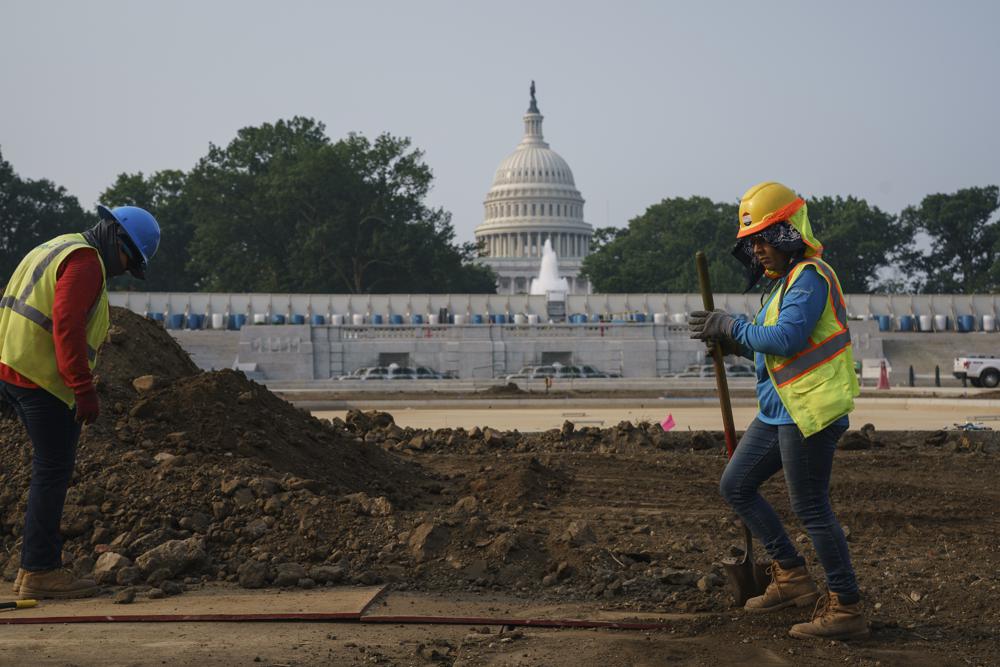 Negotiators have struggled over how to pay for the new spending.

The request comes as lawmakers are struggling to finish up negotiations over the package amid stubborn disagreements over how to pay for the new spending. Lawmakers and staff are expected to work through the weekend, sorting through the flurry of tensions over funds for water resources, public transit and other details in what they hope are the final stages of their work.

The groups representing the long-term care facilities said tapping virus relief dollars would be “short-sighted, especially as COVID-19 variants continue to spread.” They noted the Delta variant that now accounts for most of the new cases and threatens “the safety of our nation’s seniors and their caregivers.”

Senators working on the infrastructure plan hope to have a bill ready to be voted on next week. President Joe Biden has made passing the bipartisan plan a top priority, the first of his two-part $4 trillion proposal to rebuild, but a Senate test vote failed this week after Republicans said they needed more time to finish the package and review the details.

Negotiators have struggled over how to pay for the new spending without raising income taxes or user fees such as the federal gas tax. They’re looking at other sources, including undoing a Trump-era rule on pharmaceutical rebates, redirecting billions of unspent dollars from last year’s COVID relief and tapping other potential funding streams.

Even if the negotiators strike an agreement, it’s not at all clear the funding sources will pass muster with the Congressional Budget Office, the chief arbiter of many bills in Congress. If the final accounting shows the package is not fully paid for, some lawmakers may balk and use that as another reason to vote against it.

“Folks will always find a problem with our pay-fors,” Sen. BillCassidy, a Louisiana Republican, said on Bloomberg Television. “On the other hand, we will have it paid for and we will be able to not just pay for it, but point towards long-term gains the society, the economy will benefit from, according to multiple economists from across the political spectrum.”

Groups representing nursing homes and other long-term care facilities called on the negotiators Friday not to redirect money from a fund established to reimburse health care providers for expenses and lost revenue due to COVID-19.

The Department of Health and Human Services said Friday there is about $24 billion not yet allocated to providers, out of about $178 billion Congress approved for the fund through various relief measures.

The groups said some of their members have not been able to get reimbursement for expenses and lost revenue incurred in the latter months of 2020 and this year and were anxiously awaiting another round of funding from HHS.

A Democratic aide granted anonymity to discuss the negotiations confirmed that how to redirect certain COVID relief dollars is still among the issues that have not yet been resolved. Another is the amount of money that would be dedicated to public transit. There are also disputes over broadband funds and labor laws, the aide said.

“We will not support any package that neglects this fundamental part of our nation’s infrastructure,” the two senators said.

Republican Sen. Mitt Romney said that 20% of funding from the Highway Trust Fund traditionally goes to transit versus 80% for roads and bridges, and there is concern from Republicans that the bipartisan framework changes that ratio to the advantage of transit.

Sen. Tammy Duckworth, an Illinois Democrat, has also voiced concerns about the water and wastewater segments of the bill. She warned that she can’t commit to supporting a final bill if didn’t fully fund a $35.9 billion water bill that she sponsored and which passed the Senate by a vote of 89-2.

Carper said senators were assured that the legislation would be fully funded, but “now we’re hearing it may be moved around.” He said that $15 billion may be specifically allocated for lead pipe removal, rather than giving the states and local governments the flexibility to use that money as they deem most appropriate, which could include lead pipe removal.

The final package would need the support of 60 senators in the evenly split 50-50 Senate to advance past a filibuster. Last week’s test vote failed along party lines.

The package would next go to the House, where some Democrats are fearful that their priorities have been overlooked during the Senate negotiations and are warning that their votes should not be taken for granted.

Congress would next turn to Biden’s broader goals that are being drawn up in a $3.5 trillion package that Democrats plan to pass on their own under special budget reconciliation rules that would allow for a 51-vote threshold in the Senate.