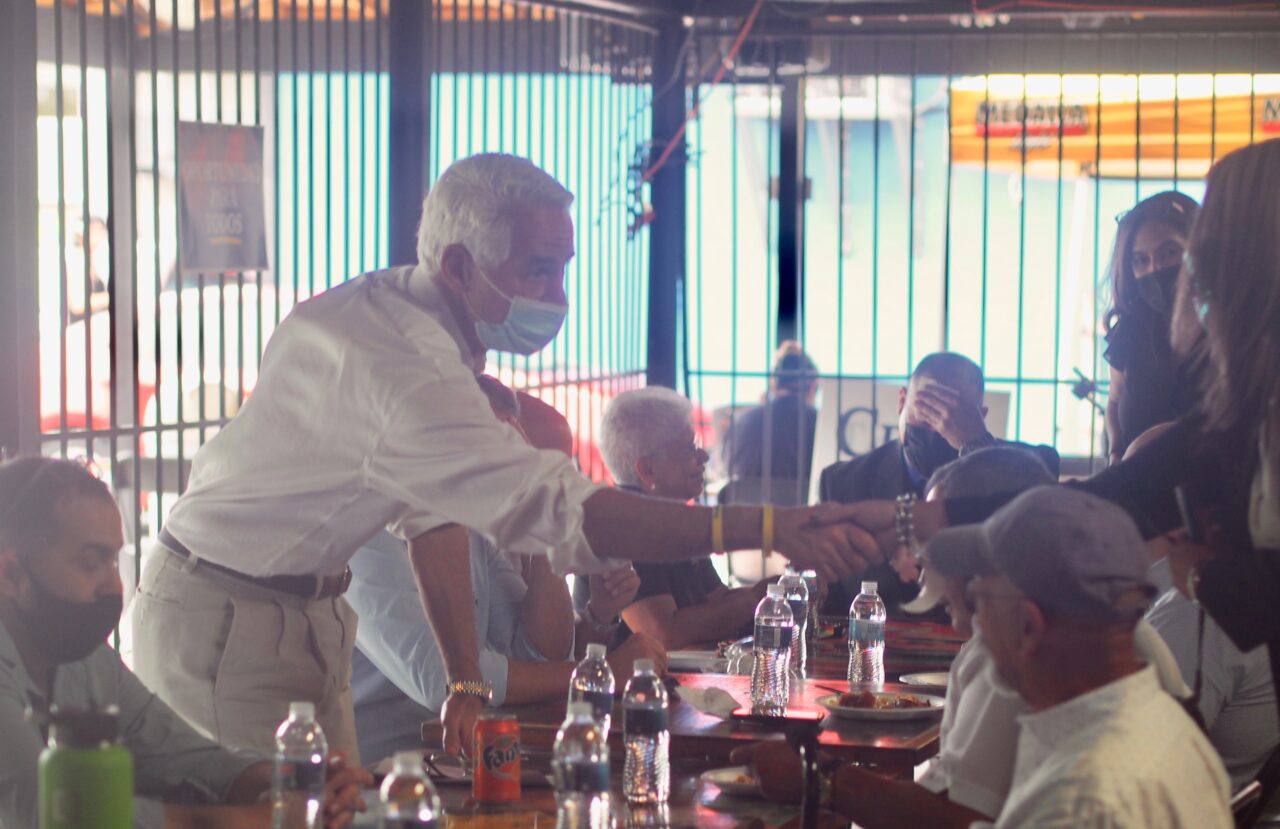 'Whatever it takes. People are dying.'

Democratic gubernatorial candidate and U.S. Rep. Charlie Crist said Tuesday that he would do everything differently from Republican Gov. Ron DeSantis in responding to the summer surge of COVID-19 in Florida.

Crist, at a campaign stop in the Kissimmee-area with Hispanic leaders at the Lechonera El Jibarito, criticized DeSantis for doing too little to persuade Floridians to get vaccinated or to wear masks at indoor gatherings.

“I think everything I’d do differently,” Crist said.

Crist is a former Republican Governor who became a Democrat, ran for Governor again in 2014 but lost, and now is a Congressman from St. Petersburg. In order to face DeSantis in the 2020 General Election, Crist first would have to win a Democratic Primary Election against Agriculture Commissioner Nikki Fried, who also has been strongly critical of DeSantis’ COVID-19 response.

Crist’s Kissimmee stop was part of a multi-city tour to reach out to Hispanic leaders for support.

It came as Florida continues to lead the nation this summer, by significant margins, in the numbers of people confirmed with COVID-19 infections, getting hospitalized because of COVID-19 illness, and dying from severe COVID-19.

DeSantis continues to maintain that what Florida is experiencing is merely a seasonal summer outbreak. He said Tuesday he expects Northern states to face the same kind of surge during the winter. He said he does not believe vaccines are creating herd immunity, and he worries masking children is a big, perilous experiment.

Yet the U.S. Centers for Disease Control and Prevention and large numbers of scientists and doctors involved in research disagree.

And Florida is not just experiencing a summer surge, rather it is far outpacing the nation in its COVID-19 outbreak the summer. It record more than 132,000 new cases last week and increased the state’s death toll by 631 additional deaths last week. That compares with the next highest totals of 82,000 new cases and 313 newly confirmed COVID-19 deaths in Texas.

Crist said the answer lies in getting Floridians to take personal measures to stop the spread of the disease, and that the Governor needs to be the leading voice for that.

“I would barnstorm the state, encouraging people to wear masks and get vaccines. I think that’s critically important to use the bully pulpit that the Governor has to try to keep our fellow Floridians, particularly our children returning to school, more safe,” Crist said. “I mean we’re number one in the country for COVID, which is horrible.”

Crist said he would be appearing in public service announcements encouraging people to get vaccinated and wear masks, if he were in office now.

“Whatever it takes. People are dying. And we’re the worst in the country. This is a time for leadership if ever there was one,” he said.

A spokeswoman for the Republican Governors Association, which is assisting DeSantis’ reelection campaign, called Crist an opportunist.

“Gov. DeSantis has worked tirelessly to encourage vaccinations across the state, to protect Flordia’s children from being locked out of their schools, and to arm Floridians with information to make the best choices for their families. For Crist to say he opposes everything the Governor’s done shows how unserious he really is about the overall wellbeing of Florida’s families,” said RGA spokeswoman Joanna Rodriguez.

Crist laughed when told DeSantis has been trying to encourage people to get vaccinated and to wear masks in some settings.

“I also would not be going to other states raising money to be reelect(ed), or for a presidential race, whichever it is he is doing,” Crist added. “And I would stay at home and pay attention to the people that I work for, my fellow Floridians.”

DeSantis’ office responded by questioning Crist’s understanding of what masks have done.

“Is he aware that counties with mask mandates did not show significantly different outcomes than counties without mask mandates last year?” press secretary Christina Pushaw replied. “Policies should be based on data, and Governor DeSantis has always made data-driven decisions.”

“I think it’s important to focus on the fact that we’re retuning to school this week, most counties are,” Crist said. “And I think that it’s very important to realize that you’re throwing together children, the largest segment in our society that is not vaccinated.”

“To add insult to injury, you’re saying as different districts fight that that you may take away the salaries of superintendents or the administrators involved in those districts for not doing what he’s saying,” Crist added.

“Our guy is doing it wrong,” Crist surmised.