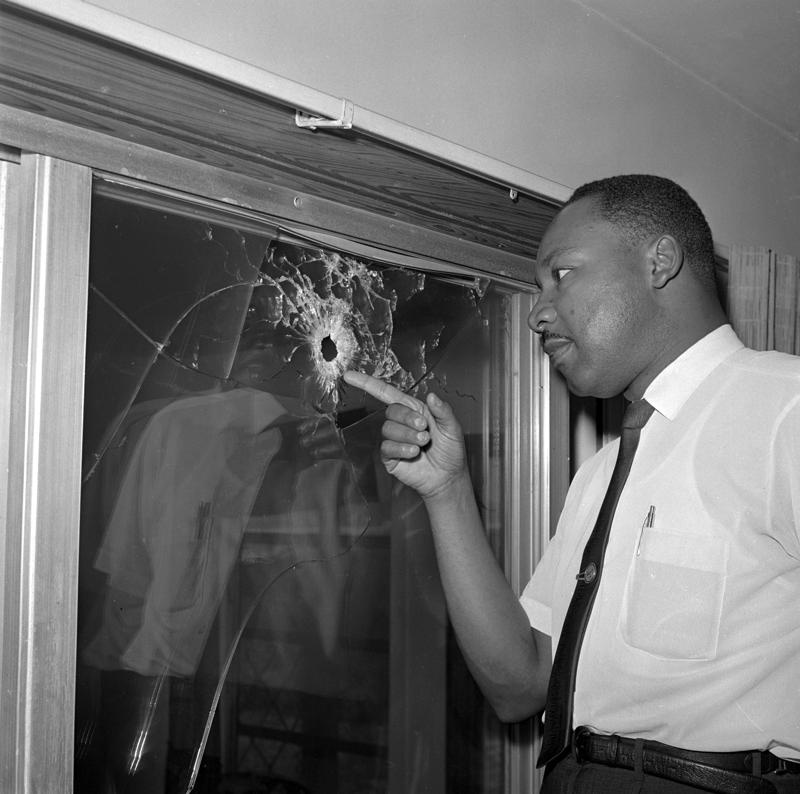 The newspaper in 1964 infomred readers King would stay there. A bullet hole remains in the structure.

A house connected to Dr. Martin Luther King Jr. is now in the hands of a couple who plans to preserve it.

David Manaute and Patti Barry live near 5480 Atlantic View already and were familiar with the house’s history. A historical marker stands on the property, which is on the coastline several miles south of St. Augustine.

During the ’60s, King came to St. Augustine to advance the civil rights movement, and he stayed in different places around town to maintain his safety.

The Atlantic View home was the target of attacks by people who apparently thought King was staying there. A bullet hole is still in one of the door frames.

Before the shooting, The St. Augustine Record printed the address of the cottage after getting a tip that he was staying there, according to historian David Colburn’s book, “Racial Change & Community Crisis.”

King wasn’t in the home at the time of the shooting. But he arrived later, and a photo showing him looking at a bullet hole in glass became “one of the iconic images of the civil rights movement,” according to the marker at the property, which is from the ACCORD Freedom Trail.

Created by the nonprofit Anniversary to Commemorate the Civil Rights Demonstrations, The Freedom Trail is a collection of markers on properties that played a role in African-American history and the civil rights movement in St. Johns County. Details are at accordfreedomtrail.org.

The home was the winter residence of missionaries who supported the civil rights movement, who opened the house to King, according to information from ACCORD.

“SCLC (Southern Christian Leadership Conference) staffers Dorothy Cotton, Rev. C.T. Vivian and Harry Boyte visited or stayed here, but Dr. King had not yet spent a night in the house when the local newspaper ran directions to it on the front page, and segregationists attacked it,” according to the marker.

“They shot up the house on May 28, 1964, and then attempted to burn it on May 30. On June 8, they smashed the windows and furniture, painted racist graffiti inside, and firebombed it. All of these events were widely reported around the country, and increased public pressure to do away with racial segregation.”

Nancy Fortier inherited the property from her mother and decided to sell the home to simplify her life after her husband’s death, she said in an interview with The Record in March. She wanted to find someone to preserve it.

Barry and Manaute passed by the house on walks in the community.

“We just thought it would be a cool idea to live in this home and … keep it and restore it,” Barry said. “We knew that some other people were interested in buying. You know, there aren’t a lot of beachfront lots. … But we knew their idea was to take it down and build another house. And when we came in and saw the bullet hole and saw the burnt floors, we’re like, ‘OK, we can’t take this down.’”

The home sold for $865,000 in September and was purchased through a limited liability company registered in Manaute’s name, Trino Holdings, according to the St. Johns County Property Appraiser and the Florida Division of Corporations.

Now, with the property in their hands, they’re planning to renovate and add to the house within a couple of years. They plan to keep the historical marker and the bullet hole. And they plan to keep what they believe are burn marks on the floorboards.

They also are considering opening the home to the public on Martin Luther King Jr. Day, Manaute said.

Manaute said it would be much easier to buy an empty lot and build from scratch, but they want to preserve the history. Manaute said since they bought the house, he’s shown two or three groups inside the home who had stopped to take a look at the marker.

“And just showing them the inside has transformed the visit to them from just seeing the marker,” he said.