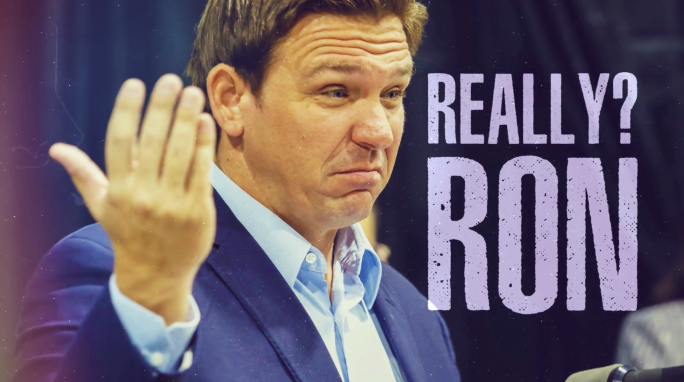 The video comes on the heels of word that the Supreme Court will review Texas' 'heartbeat bill.'

Gov. Ron DeSantis’ support of anti-abortion legislation, including his interest in a Texas-style bill in Florida that would outlaw abortion as early as six weeks into a pregnancy, is the subject of a new digital by a group with aims to oust the Governor in next year’s election.

On Monday, anti-DeSantis political action committee Remove Ron released a video (viewable below) describing Texas’ so-called “heartbeat bill” — and a bill like it now moving through the Florida Legislature — as “inhumane,” among other pejoratives.

The video opens with a narrator reading quotes from some of the nation’s largest media outlets: “It’s been called cruel, violating, the most radical abortion law in America. Now…”

It then switches to a TV news anchor speaking about the Texas bill, which became effective Sept. 1.

“Some are wondering if Florida will be the next state to pass a similar abortion law,” he says.

Another reporter chimes in. “The answer, in a word, is yes,” the reporter says. “They are already working on a Florida version of this Texas abortion law, and the Governor tells me he’s OK with it.”

A clip of DeSantis then appears onscreen. “I’m pro-life,” he says. “I welcome pro-life legislation.”

Then the voiceover returns.

“Really, Ron?” the narrator chides as images of Maryland Gov. Larry Hogan and U.S. Sen. Susan Collins of Maine, both of whom have criticized the bill, flash across the screen. “Even some Republicans call the Texas abortion law extreme, inhumane and unconstitutional. So, what else do you have to say about it, Ron?”

DeSantis’ answer: “What they did in Texas was interesting … and I’m going to look more significantly at it.”

The video then breaks down a few key aspects of the bill. It’s the strictest anti-abortion law in the nation, barring physicians from performing an abortion if a fetal heartbeat is detected, which can be as early as six weeks into a pregnancy and before some women know they’re pregnant.

There are no exceptions for rape and incest.

Another detail left out of the video: The Texas abortion bill, as well as its Florida clone, does not empower state law enforcement agencies to uphold its rules. Instead, it allows private citizens to sue for up to $10,000 per abortion anyone who “performed or induced” an abortion, including those who “aided or abetted” the person receiving or performing the procedure.

“We know where you stand, Ron,” the video voiceover says before DeSantis is again shown onscreen repeating, “I’m pro-life. I welcome pro-life legislation.”

The video then warns: “Next year, Florida’s women will show you where we stand.”

The new Remove Ron ad comes on the heels of the U.S. Supreme Court’s Friday announcement that it would review Texas’ bill. Oral arguments begin Nov. 1.

Prior to the announcement, the Supreme Court had maintained a hands-off approach. But the court was prompted to become involved late last week following legal challenges by the U.S. Department of Justice and Texas abortion providers, who argued the restrictions violate the court’s landmark Roe v. Wade decision and subsequent rulings.