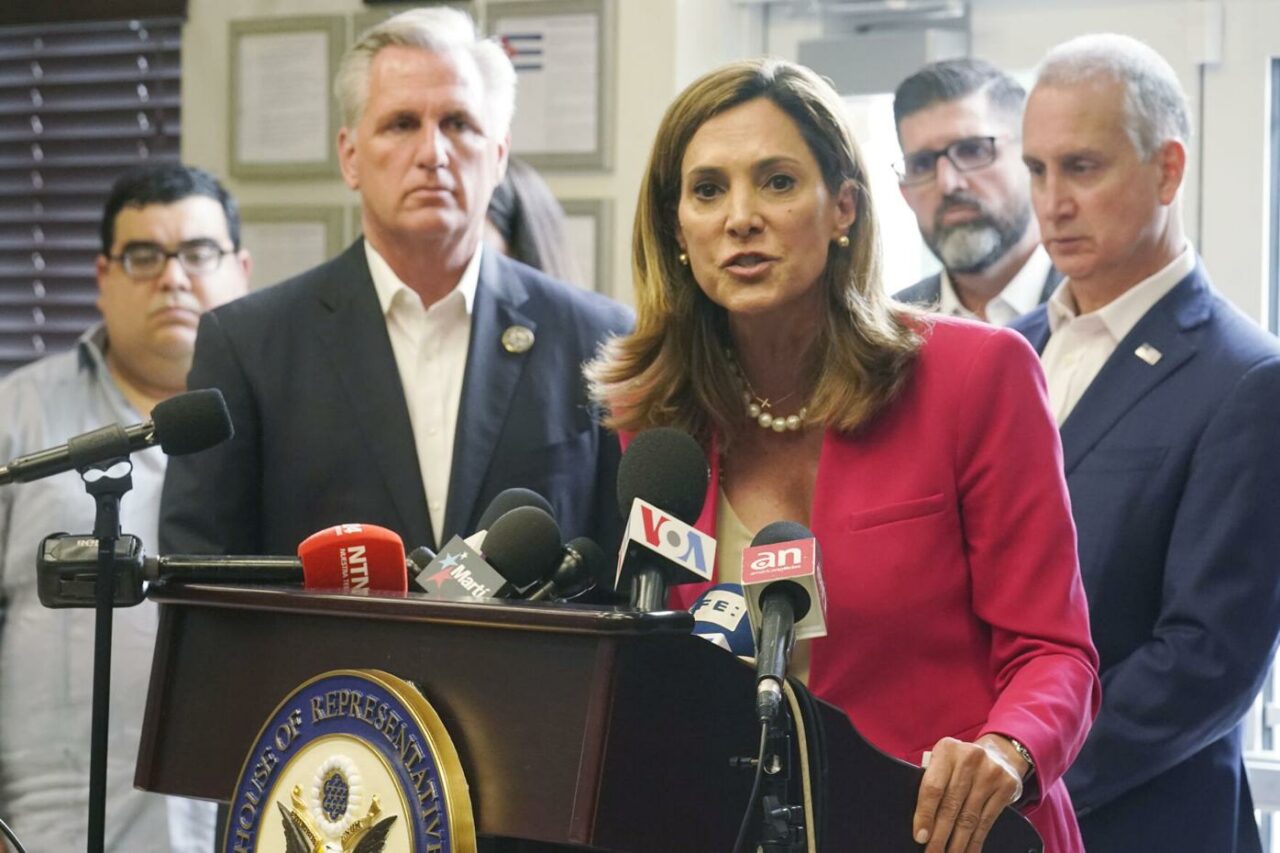 Democrats have again slammed U.S. Rep. María Elvira Salazar with accusations of hypocrisy after the Republican Congresswoman posted a photo on Twitter in which pictures of Venezuelan President Nicolás Maduro and former Cuban dictator Fidel Castro could be seen hanging in her Washington office.

Salazar, one of the most outspoken members of Congress against communist and socialist regimes and ideologies, posted the photo at 11:44 a.m. Wednesday.

“Strategy session with my legislative staff,” she wrote with an accompanying American flag emoji. “Glad to be here in DC despite the cold!”

The photo showed Salazar in her office sitting slightly apart from a handful of aides. Directly above her hung six framed photographs.

Glad to be here in DC despite the cold! ❄️ pic.twitter.com/3VuzVX9buy

It took just over 30 minutes for Juan Escalante, a Venezuelan-born immigration activist, to point out that of those six pictures, one depicted Salazar and Castro during an exclusive 1995 interview and another was of a much more recent interview she conducted with Maduro.

Sharing a screenshot of Salazar’s tweet, he wrote: “These were from her time as a reporter (obviously) but do they belong in Congress?”

He then answered his own question: “NO.”

So… @RepMariaSalazar has a FRAMED photo of herself with to Fidel Castro AND a second where she appears next to Nicolas Maduro in her Congressional Office.

These were from her time as a reporter (obvs) but do they belong in Congress?

Salazar responded about a half-hour later, explaining the pictures were indeed from her 35-year career as a broadcast journalist.

“Is this the best criticism you have against me?” she fired back. “These photos are hanging to remind my colleagues not to allow these Satanic ideologies to penetrate the halls of Congress. Nice try.”

Really? Is this the best criticism you have against me?

I was a journalist that interviewed the world’s most notorious. And I won 5 Emmys for it.

These photos are hanging to remind my colleagues not to allow these Satanic ideologies to penetrate the halls of Congress.

Salazar, along with fellow GOP U.S. Reps. Mario Díaz-Balart and Carlos Giménez of South Florida, has consistently denounced Maduro and the communist regime in Cuba that today continues under Cuban President Miguel Díaz-Canel.

Earlier this year, they joined U.S. Sen. Rick Scott, House Minority Leader Kevin McCarthy and others in repeatedly calling for improved action and support from President Joe Biden after Cuban citizens took to the streets in July as part of the largest series of protests the island nation had seen in decades.

She also co-sponsored legislation condemning anti-democratic practices in Latin America and the perceived inaction of the current U.S. administration.

That was all bluster, said Democrat Janelle Perez, who is running to unseat Republican Ileana Garcia in Florida Senate District 37.

“YIKES,” Perez wrote at 12:32, “you’re the 1st & only member of Congress to have your meetings with both dictators proudly displayed on your congressional office walls. I get it, you only claim to fight communism when you use it to scare constituents.”

Is that a photo of Fidel Castro & Nicolas Maduro?! YIKES you’re the 1st & only member of Congress to have your meetings with both dictators proudly displayed on your congressional office walls. I get it, you only claim to fight communism when you use it to scare constituents. https://t.co/8MmqJ6vZT7

Democratic strategist Christian Ulvert, who counts Perez among his many clients, said Salazar should apologize.

“Where’s the outrage???” he wrote. “It’s shameful and a disgrace to our community.”

Where’s the outrage??? A member of Congress dignifies the Capitol, our symbol of democracy, with pictures of Castro and Maduro. Que ofensivo! It’s shameful and a disgrace to our community. She owes an apology. https://t.co/QlQDCcxrjK

Scores of others joined in to further bash Salazar.

Democratic Congressional Campaign Committee spokesperson Abel Iraola said Salazar is privileged to serve in one of the highest bodies of democratic government in the world. By hanging the photos, he wrote, she had sullied her office.

.@MaElviraSalazar has the privilege of serving in one of the highest bodies of democratic government in the world.

She's chosen to dishonor that privilege and her office in Congress, decorating it with photos of Fidel Castro and Nicolás Maduro. pic.twitter.com/CWuCk9JNbH

“Which congressperson has pictures with Castro and Maduro hanging in her offices?” he wrote. “That would be @MaElivraSalazar…the same person who is the first to point fingers and label the rest of us communists for disagreeing with her.”

Rivero then issued a challenge several others echoed: “Hang this in your Miami office.”

Which congressperson has pictures with Castro and Maduro hanging in her offices? That would be @MaElviraSalazar… the same person who is the first to point fingers and label the rest of us communists for disagreeing with her. Lmao…
Hang this in your Miami office. https://t.co/VKRQVG0Exq

“Your 24/7 running at the mouth calling everyone who doesn’t like you a socialist. Talk about projection,” she wrote at 1:55 p.m. “What a punch in the gut to all the proud, pro-freedom, pro-democracy, anti-communist, anti-dictatorship, Cuban and Venezuelan Americans in Miami.”

Some came to Salazar’s defense. One person said though he is unlikely to vote for Salazar, he believed the pictures more so indicated how proud she is about her former career than of any allegiance to a political ideology she so outwardly opposes.

“(She) was a TV host and a good one,” he wrote. “She displays those photos to take pride in the pull she (had) to interview in person those functionaries.”

Another agreed, calling the criticism “a cheap shot.”

“Democrats are seriously trying to argue that *Maria Elvira Salazar* is pro Maduro & Castro,” he wrote. “Democrats think the voters of Miami are stupid.”

Wednesday’s hullabaloo isn’t the first time Salazar has attracted criticism for not avoiding all association with Maduro.

In September, the Federal Elections Commission flagged her political committee, Salazar for Congress, for accepting more than $147,000 in excessive campaign contributions. Democrats swiftly rebuked her.

Among the illegally excessive donations: $5,700 from Colombian lawyer and permanent U.S. resident Abelardo de la Espriella, who until 2019 represented Colombian businessman Alex Saab, the subject of a money-laundering investigation into crooked deals with the Venezuelan government.

The U.S. Treasury Department sanctioned and indicted Saab in July 2019 for bribing Maduro’s three stepsons, who funneled money in exchange for access to their stepfather’s regime and government contracts, including Venezuelan food subsidy programs.

De la Espriella, who served as Saab’s attorney for several years until his indictment, admitted in court to helping Saab avoid capture in 2018 by enlisting the aid of a dishonest cop who informed him of the pending arrest.

In her October FEC filing, Salazar reported she had returned the over-the-limit contributions from De la Espriella and others.

One such ad, titled “Shameless,” ran a clip of her famous interview with Castro, whom she called “El Comandante,” which Primary opponent Stephen Marks said was a sign of affection.

Salazar later threatened legal action to remove the ad, some of which Shalala reused in another attack spot that also included a clip of Salazar telling Che Guevara‘s nephew that it was a “privilege” to interview someone with Guevara’s DNA.

nextWant ivermectin for COVID-19 treatment? UF Health study may be for you