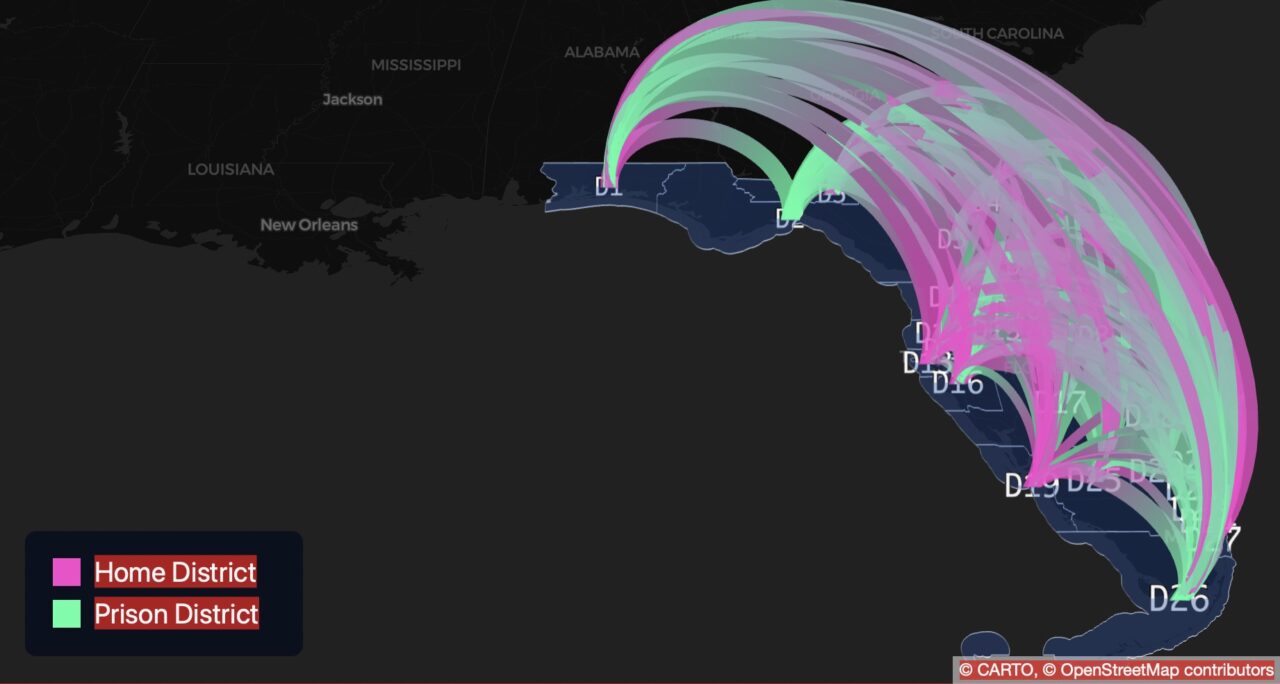 A lot of residents in Big Bend prisons come from elsewhere.

As lawmakers balance districts based on population, should inmates count as residents in the location for their respective prisons? Or should they be considered residents of the place they call home?

Most states, including Florida, will draw from population figures that count people as living wherever they rested their head on Census Day, April 1, 2020. But many justice reform advocates deride that policy, disparaging the practice as “prison gerrymandering.” According to data just released by the Florida Rights Restoration Coalition (FRRC), it means some communities are being undercounted by thousands of people.

This week, the organization went live with an interactive map of Florida, dubbed the Body Count, that scrutinizes just how many people weren’t counted by the U.S. Census at their last known pre-incarceration address.

“We believe in putting people over politics, and prison gerrymandering does the opposite of that,” said FRRC Deputy Director Neil Volz. “Prison gerrymandering inflates the political influence of the district where a prison is located, at the expense of the community where a currently incarcerated person lives.”

And so, the organization is encouraging people to learn how this process impacts voters by engaging with the interactive map.

Meanwhile, there are nearly 3,300 prisoners who lived in Florida’s 10th Congressional District before being sentenced to prison but who won’t be considered residents of the greater Orlando jurisdiction when the Legislature redraws lines. More than 1,200 of those prior constituents of U.S. Rep. Val Demings were documented on Census Day as residents of Dunn’s CD 2.

Volz said researchers documented the shifts based on the addresses recorded in the most recent court records. When that wasn’t available, the FRRC turned to addresses on record with the Department of Corrections (DOC).

“If none of those is available, which is sometimes the case for lifers and people with pre-2000s convictions, we extrapolate their most likely true district using the county of their most recent conviction,” he said.

Analysts assign the remainder of individuals pro-rata by distributing people with known addresses from each Florida county.

“We also add race as a filter because it’s one of the most reliable predictors of where people live and because many (Voting Rights Act) districts have to be drawn so that racial minorities can elect a candidate of choice,” Volz explained. “In that last piece, we also reclassify Latinos, which DOC is known to underreport, using an upgraded version of the Census surname algorithm.”

Notably, two of the three congressional districts with the greatest undercounts on residents — Florida’s 10th and 24th Congressional Districts — are considered VRA districts, where Black voters effectively can determine the election’s outcome.

Several prisoners in Florida’s system hail from out-of-state, but that represents less than 5% of those serving felony sentences in Florida prisons, Volz said.

Regardless, the data presented in the Body Count interactive maps shows how prison gerrymandering specifically impacts the Florida reapportionment process.

Democrats early on in the redistricting process pushed for Florida to account for the relocation impact of inmates. Rep. Kelly Skidmore, the ranking Democrat on the House Congressional Redistricting Subcommittee, said Florida should follow the lead of 11 states that passed laws to count incarcerated individuals at their home address and not the prison they were assigned to last April.

But Rep. Tyler Sirois, the Republican chair of the subcommittee, said Florida law does not allow lawmakers to manipulate census data in any way. At least in this go-around of the once-a-decade redistricting process, Florida will not shift prison populations.

If the committees change their minds, however, the FRRC maps show exactly the impact prison gerrymandering delivers on each of the draft maps produced by legislative staff to date.

The last published draft for state Senate districts, for example, shows nearly 4,800 individuals who list a home address in Senate District 6 — another minority-controlled district represented by Jacksonville Democrat Audrey Gibson — get counted as residents of another locale. Meanwhile, Senate District 3, represented by Tallahassee Democrat Loranne Ausley, sees an overcount of close to 15,000 people. That’s a greater disparity in raw numbers than found even with the congressional maps with far more populous districts.

The last draft map published for proposed House districts has the worst undercount in House District 14, another Jacksonville area jurisdiction represented by Democratic Rep. Angie Nixon. More than 2,200 incarcerated HD 14 residents were sheltered elsewhere on Census Day. The worst overcount is in House District 7, represented by Port St. Joe Republican Rep. Jason Shoaf. HD 7 is a prison-rich district that absorbed well over 12,000 inmates from other communities in the state.

Jacob Ogles has covered politics in Florida since 2000 for regional outlets including SRQ Magazine in Sarasota, The News-Press in Fort Myers and The Daily Commercial in Leesburg. His work has appeared nationally in The Advocate, Wired and other publications. Events like SRQ’s Where The Votes Are workshops made Ogles one of Southwest Florida’s most respected political analysts, and outlets like WWSB ABC 7 and WSRQ Sarasota have featured his insights. He can be reached at jacob[email protected]