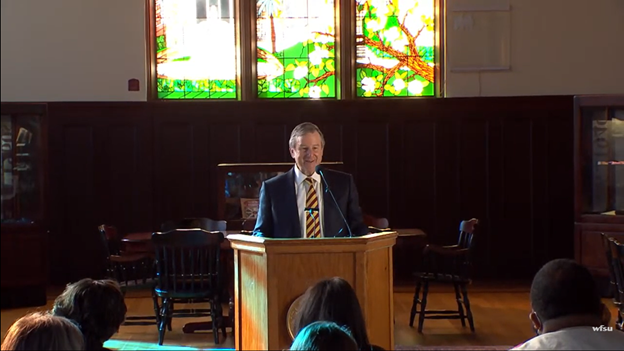 McCullough said the university plans on hiring 110 more tenure-track professors and seeking membership into the Association of American Universities.

“There has been truly outstanding progress at the university over the last five months,” he said. “I would like to report that the state of the university is excellent and is improving.”

McCullough also thanked university faculty for the work they did to get the university through the COVID-19 pandemic.

“We have asked our faculty to step up, and roll out curriculum to go from in-person classes to hybrid and online and flex options at the drop of a hat,” he said. “It is because of their dedication and flexibility and hard work that we were able to deliver to our students. I have to say they are the core of making our students successful, thank you.”

McCullough also tipped his hat to those who worked on COVID-19 testing, vaccination and contact tracing efforts. He made no specific mention of James Zedaker, the former head of the university’s COVID-19 vaccine and testing administration program who resigned last week after a university investigation that found he violated FSU’s sexual misconduct policy in interactions with three COVID-19 clinic employees.

However, he did say during the address he strongly encourages members of the FSU community to anonymously report sexual harassment when they see it happening.

“If you make that report, we will investigate. We will take disciplinary action when people are found guilty,” he said.

McCullough said the university’s improvement and continued climb has earned it the backing of leaders in state government who wish to keep Florida’s higher education system strong.

“Florida has the number one higher education system in the country, and our Governor and our Legislature is incredibly proud of this fact,” McCullough said. “I guarantee you that they will continue to support us because that is a goal of theirs, to maintain that number one position.”

He also said the university hopes to grow further relationships with local government officials. He mentioned the university’s recent agreement with the city of Tallahassee that allows the university to draw power from city-owned solar farms. The agreement has pushed the amount of campus energy coming from solar to 30%.

He specifically shouted out Tallahassee Mayor John Dailey during his address. Dailey has been a champion of the Blueprint Intergovernmental Agency’s $20 million allocation to the university for repairs to Doak S. Campbell stadium.

“Mayor John Dailey has been an amazing supporter of Florida State University, a good friend to us. We look forward to our innovation agenda with him,” McCullough said.

Going forward, he said the university’s goal is to crack the top 15 in the U.S News and World Report rankings. To get there, the university plans on hiring 110 more tenure-track professors and seeking membership into the Association of American Universities (AAU), an organization of top research universities in America and Canada.

“We are Florida State, and we are moving forward in excellence,” he said.