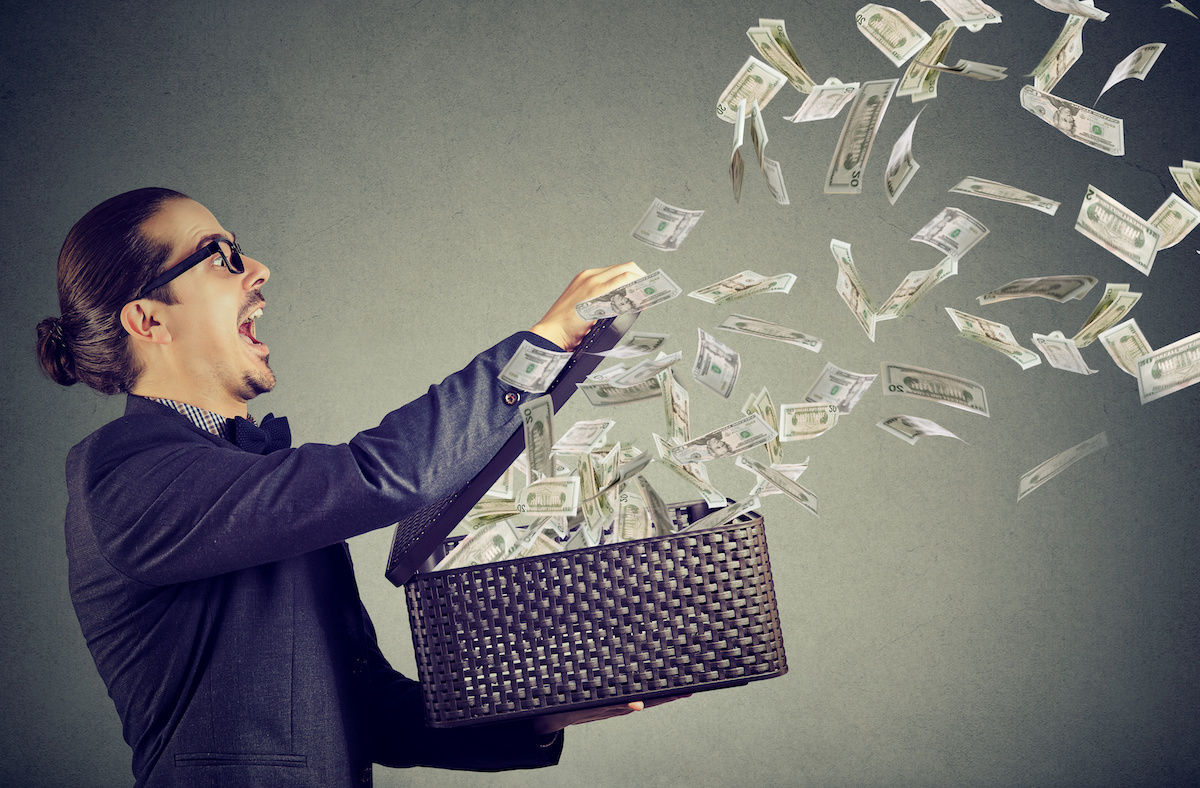 The conservative group is taking aim at VISIT FLORIDA and a tax rebate program for film productions.

A conservative advocacy group is sending out mailers that cast proposals being considered by lawmakers as “corporate welfare” and ask Florida voters to rally against them.

The bills targeted by Americans for Prosperity-Florida include SB 434 and HB 489, which would extend the authorization for the state’s tourism marketing arm, VISIT FLORIDA, by five years. The mailers also slam SB 946 and HB 217, which would set up a tax rebate program to drum up film and television production business.

“This Legislative Session, one of our priorities is to stop corporate welfare and its unfair consequences for Floridians,” AFP-FL State Director Skylar Zander said in a news release. “Instead of wasting Floridians’ tax dollars on flawed attempts to increase tourism or boost the film industry, let’s let Florida’s countless attractions and our Governor’s leadership continue bringing prosperity and opportunity to all our residents.”

The VISIT FLORIDA proposal, in particular, has proved popular among lawmakers. It cleared its final Senate Committee on Thursday with a 19-0 vote and is now ready for consideration by the full Senate. The House companion advanced through its final committee on Monday.

VISIT FLORIDA, funded at $50 million in the current year budget, will sunset on Oct. 1, 2023, under current law. If either 2022 bill is approved by lawmakers and the Governor, VISIT FLORIDA’s authorization would be extended through Oct. 1, 2028.

The Legislature has been keeping VISIT FLORIDA on a rolling, two-year lifespan, grudgingly moving the sunset clause forward every year, for several years, since scandals in the mid-2010s gave the agency a reputation for out-of-control slush-fund spending and lack of accountability.

The agency was particularly disliked by former House Speakers Jose Oliva and Richard Corcoran. AFP-FL has also been a consistent critic, deriding the agency as a form of “corporate welfare.” Its view has not changed.

Last week, with both bills primed for their final committee hearings, AFP-FL urged lawmakers to kill the plan, saying state funding for tourism marketing was tantamount to “picking winners and losers.” Now that their call has gone unheeded, the group is asking voters to back them up.

AFP-FL has consistently bashed state-backed film programs as well. Florida has not had a statewide program to lure film production companies to the state for years.

Florida’s first film program was initiated by then-Gov. Jeb Bush in 2004. Since the well ran dry on Florida’s last film package, passed in 2010, the state has shed productions left and right — gone are the days of “Bloodline,” “Ballers” and many others.

According to newly released data from trade association Film Florida, the state has missed out on more than $1.5 billion in film, television and digital media business since the 2010 program lapsed.

“We continue to lose projects because Florida is at a competitive disadvantage. It’s extremely frustrating to lose out to Texas, Louisiana, North Carolina, Georgia and others. Florida has handed $1.5 billion to other states and we just want to compete,” Film Florida President Gail Morgan said earlier this week.

There were faults with the past program — the process for awarding funds has been criticized for operating on a first-come, first-served basis and some projects that were awarded funding never materialized.

Sponsors of the 2022 effort have attempted to address those concerns by pitching a program similar to the one in North Carolina. Funding would be awarded only when a film, TV show or streaming program is ready to air and it would come in the form of a tax rebate with the amount based on verified spending for things such as camera rentals or salaries paid to Florida residents. Productions would be eligible for a rebate of up to  23% of its qualified expenditures or $2 million, whichever is less.

However, Zander said AFP-FL considers “film incentives” — a term that proponents say is inaccurate — are “an act of raw corporate welfare.”

“The legislation would require taxpayers to fund a sequel to the original film incentives program that flopped — bringing in only 43 cents in returned tax revenues for every dollar spent by the state,” he said. “Film incentives simply do not work, and they are corporate welfare that benefits only film industry executives and Hollywood elites. Floridians have seen this movie before, and they don’t need a sequel.”

Of the two proposals AFP-FL singled out, the film bills stand a smaller chance of passing. In recent Legislative Sessions, bills to launch similar tax rebate programs have stalled out after clearing one or two committees. The Senate film bill passed its first stop earlier this month. The House companion has yet to be heard in committee.

A copy of the mailers is below. 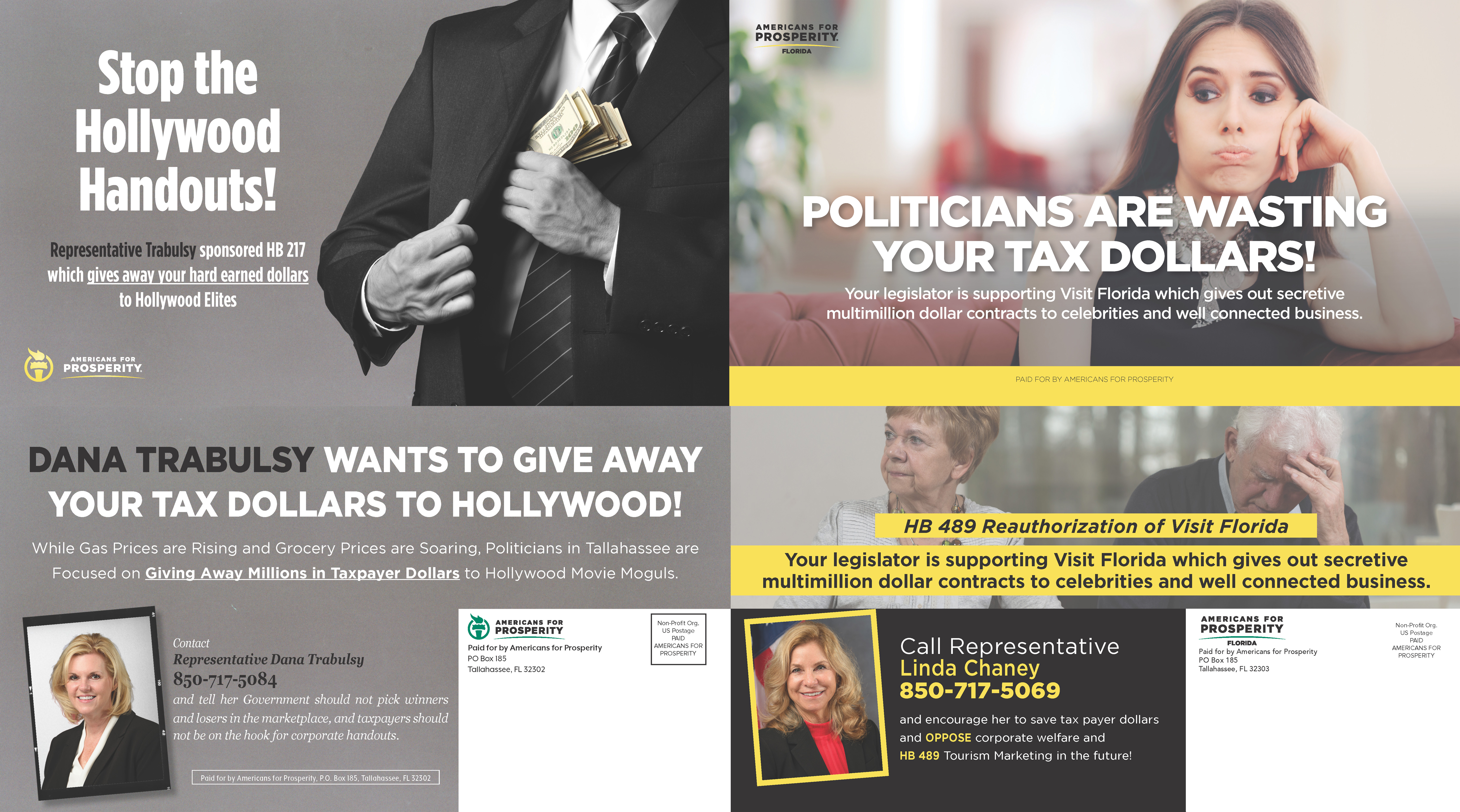 nextChristopher Benjamin will run in HD 107, even if it requires a move