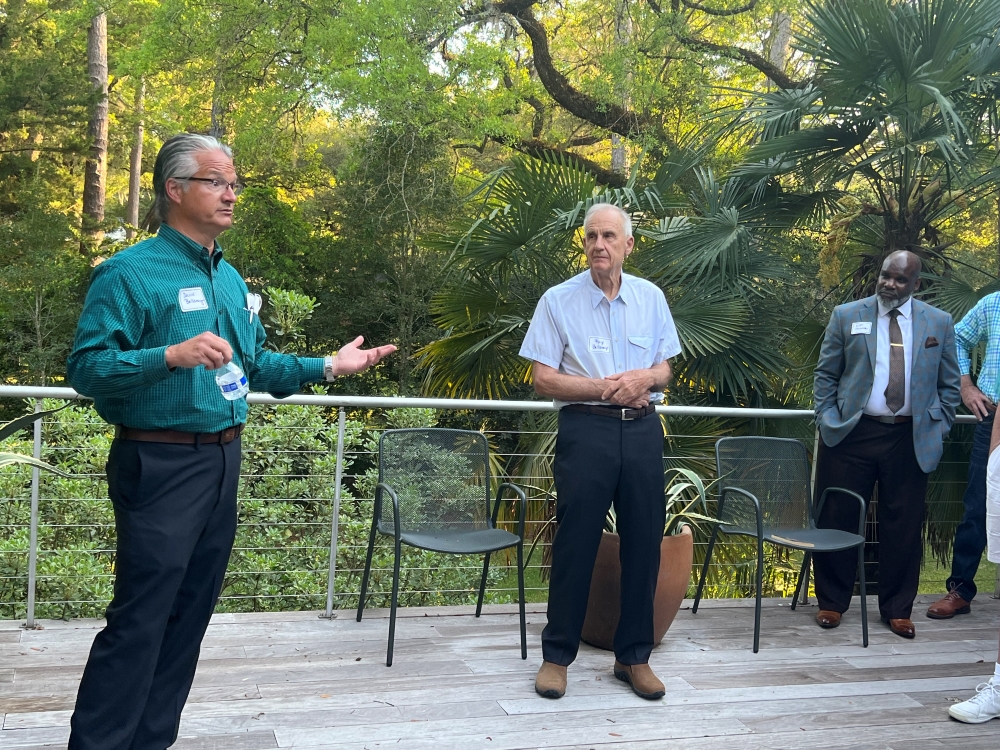 'If the only response to conflict is to label the other person a bad guy and not talk to them, you can't get anything done.'

Bellamy, a surgeon and part-time police officer, is running against Tallahassee City Commissioner Jeremy Matlow in the upcoming 2022 election. The event was held at the home of his father, environmental advocate Ray Bellamy. David’s late mother, Carol Bellamy, was a Tallahassee Mayor and Commissioner in the 1980s.

At the door of the event, David’s two children, Olivia and Brantley, scribbled name tags for attendants and asked if they wanted to donate to their father’s campaign. Among the several dozen people in attendance were former Leon County Commissioner Mary Ann Lindley, Leon County Commission candidate Rudolph Ferguson, and Erwin Jackson, one of the people who helped expose City Hall corruption in the Scott Maddox case.

Ray introduced his son before his speech while holding up a copy of a romance novel cover David modeled for in his youth. Ray donated $150 to Matlow before his son entered the race, but has since thrown his support behind David, donating $1,000 to him and hosting the event.

The candidate began his speech by pointing out how the city’s rising poverty and crime is what prompted him to run.

David Bellamy shared the story of one of his son’s football teammates at St. John Paul II Catholic High School who broke down at school because the night before, he had to shelter his siblings in the back room of their home due to gunfire on the street. He said many of the neighborhoods in the city have not received the development and city support they have needed to overcome crime and economic issues.

“I started noticing many of the high crime areas were in my zone when I was a policeman going back to the early ’90s. It looks like time has stood still down there,” Bellamy said.

He said much of the city’s investment in those areas have been directing to the wrong projects.

To Bellamy, one of the obstacles to fixing those problems is the inability to build consensus and clashing leadership styles at City Hall.

He said he voted for Matlow in 2018, but has been disappointed with how he has dealt with conflict and believes he has contributed to dysfunction at City Hall.

“If the only response to conflict is to label the other person a bad guy and not talk to them, you can’t get anything done,” Bellamy said. “I really thought that the divisive nature that he brought was hurting the very causes that I wanted fixed. You can’t fix up the south side if you can’t build a consensus.”

Bellamy specifically pointed to how the Blueprint stadium funding issue was handled. He said he doesn’t think the money should have gone to Doak Campbell Stadium, but that a compromise could have been reached if the concern was dealt with earlier in the process.

“I don’t think anybody that voted for Blueprint thought they were voting for the booster to get $20 million, but I think a better leader could have worked out some sort of compromise,” Bellamy said. “I think that somebody should have jumped onto the first meeting or the second, and said ‘Hey, we got to tap the brakes here.’ And nobody did. To come out swinging on the third meeting, I think actually made it worse.”

When Bellamy opened it up to Q&A, one guest asked him about accusations that he was recruited to run by the Greater Tallahassee Chamber of Commerce, who has publicly butted heads with Matlow and called for candidates to challenge him. Bellamy has raised over $175,000, more than twice the amount of Matlow. Several Chamber companies have maxed out donations to him.

Bellamy said that while he has been supported by Chamber members, they did not recruit him to run. He said he knew it would be easy to raise money because people see Matlow’s attitude isn’t “moving things forward.

“I’m a doctor, we don’t really do anything with the Chamber. I’m going to probably take a hit on my income during this, there’s really nothing that they can give me that I need,” Bellamy said. “I saw an opportunity (that) if I ran I would have a lot of support from people that don’t like him without having to offer them anything.”

Bellamy said he wants the city government to return to the professionalism and collegiality that existed when his mom was in public office.

“I still have patients at least once a year who mention that you could have a meeting with my mom and not get a thing you like done, but you left liking her, respecting her and willing to work with her again,” Bellamy said. “We got to get back to that.”