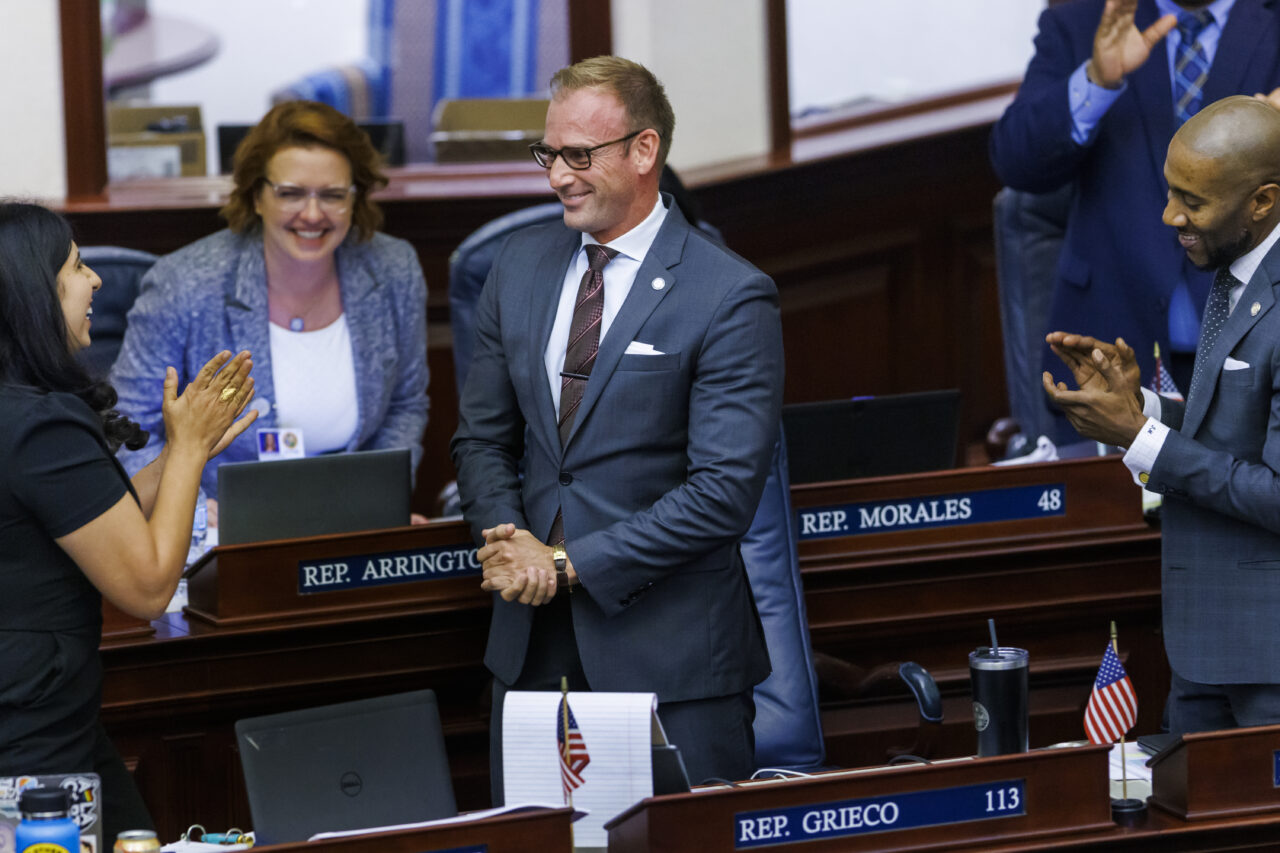 ‘I’ll be the first to run toward the fire when it comes to certain issues.'

Miami Beach Democratic Rep. Michael Grieco began the 2022 Legislative Session with a roster of ambitious bills he believed had the potential to unite lawmakers regardless of political affiliation.

Then he filed to challenge Republican Miami Sen. Ileana Garcia this November. After that, he said, most of those bills were all but doomed.

“When I filed to run for state Senate, you could take all my bills and put them in the dumpster,” he told Florida Politics. “The moment I announced that I would be seeking to unseat ‘illegitimate Ileana,’ my subsequent bills and any appropriations of note that I had my name on were going to die on the vine.”

While it turned out that prediction was rather accurate by and large, Grieco still enjoyed some wins.

Among them: HB 1469, which will impact residents in and around Grieco’s House district by honoring the 98 lives lost in the Champlain Towers South condo collapse in Surfside.

The bill (HB 1469) renames a stretch of Collins Avenue between 87th Terrace and 88th Street “98 Points of Light Way.” It was the only standalone street-renaming item of the year.

“This very tragic event impacted not only my constituents but (Rep.) Joe Geller’s constituents and beyond,” Grieco said. “The Police Chief of North Bay Village, which is one of the areas I represent, his mother passed in the collapse. I was there many, many days along with Sen. (Jason) Pizzo.”

Another success was HB 435, which flew through the three House committees to which it was assigned before stalling on the Senate floor. Fortunately, its language was absorbed into a larger sexual cybercrimes bill by Senate Democratic Leader Lauren Book and Republican Rep. Joe Harding that the Legislature approved March 8.

Grieco’s portion of the bill, which heightens penalties for sexual abuses of animals, came in response to the disturbing story of an Aventura veterinarian who, among other things, recorded himself having sex with dogs and sharing them on social media.

A Miami federal court ultimately sentenced the man to 22 years in prison, but that sentencing was mostly due to other crimes.

“He essentially couldn’t be prosecuted at the state level because it’s only a misdemeanor, so they prosecuted him federally,” Grieco said. “We wanted to put some teeth into state law to make sure we put an end to this type of animal abuse and these types of disgusting internet videos.”

The bill, upon receiving Gov. Ron DeSantis’ signature, will increase the level of offense for sex acts on animals from a misdemeanor to a felony, create a new offense for creating videos of the acts and make prison time mandatory even for first-time offenders.

“The Humane Society could not be happier,” Grieco said.

Asked which bills he plans to resurrect next year, Grieco’s immediate answer was HB 781, a measure called “Greyson’s Law” after 4-year-old Greyson Kessler, who was killed by his father in a murder-suicide in May 2021.

Greyson’s mother, Alison Kessler, had repeatedly tried to gain exclusive custody of Greyson to protect him from what she knew were growing threats to his safety, but at every turn, courts ruled against her motions until it was too late.

“No one believed me,” she told Florida Politics in December. “Family courts right now are just so archaic.”

Had it passed, the bill would have expanded the definition of domestic violence by establishing a connection between domestic violence between adults and the abuse of children. The rationale, Grieco said, is simple: If a person is willing to threaten or commit domestic violence against their partner, that may have some bearing on their fitness as a parent.

The bill also would add language to state statutes regarding coercive control, a nonphysical means by which abusers exert power over their partners through financial and psychological means.

HB 781 received no hearing in the House. Its Senate companion by Boynton Beach Democratic Sen. Lori Berman cleared one committee before stalling out.

Grieco, a lawyer in private life, chalked the bill’s poor performance this year to his Senate run and having “too many cooks in the kitchen.”

“Everybody had an opinion, whether it was staff or the Florida Bar,” he said. “It just didn’t get the momentum it needed, but I’m confident that if I’m on the Senate side, that we’re going to get it to move. And I’ll find a good House sponsor who can help me with it.”

Then there was HB 819, which would require landlords in Florida to provide air conditioning to tenants. State law now only calls for such accommodations for heating.

Neither Grieco’s bill nor its Senate companion, which Pizzo carried, saw a single hearing.

Likely a bit more controversial, HB 193 would have ordered the Department of Health and Board of Medicine to study the alternative therapeutic applications of psilocybin, ketamine and MDMA in treating depression, chronic pain and a host of psychological maladies.

In August, the Food and Drug Administration approved the use of psilocybin, the psychoactive ingredient in so-called “magic mushrooms,” in a drug trial for treatment-resistant depression.

However, the bill, which Grieco admits to having plagiarized from legislation that is now law in Texas, received no hearing in the House. Its Senate twin by Book saw a similar fate.

“Feel free to Texas my Florida on this one,” Greico said. “All we’re asking is for them to send it to the universities and say, ‘Let’s study this.’”

Grieco also plans to bring back a bill he most recently filed for the 2021 Legislative Session (HB 63) that would require every public school to have bleed control kits. The kits, also known as emergency trauma packs, are a kind of first aid kit that include trauma dressing, gauze, chest seals, coagulation material and tourniquets to help stop serious bleeding.

In February, every public school in Miami Beach received “Stop the Bleed” kits — something Grieco said he had a hand in making happen.

“I helped get them into our feeder pattern, and they’ve got them in every classroom in our high schools,” he said. “I also have the American College of Surgeons who are willing to train the entire state for free to get these in all the schools.”

One new bill Grieco plans to file next Session would safeguard women from having their DNA used against them following a sexual assault.

“I would consider either running a standalone piece of legislation or making sure that it was included in some sort of criminal justice package to ensure that law enforcement would not be able to violate a woman’s privacy by using her own DNA in a rape kit and potentially prosecute her for some unrelated crime,” Grieco said.

Grieco said the Legislature “dropped the ball” this last Session on condo reform, a glaringly urgent issue in the wake of Surfside. He’ll file a bill to address that, he added, as well as related problems like property insurance.

“A lot of the issues I want to address are nonpartisan issues, and they shouldn’t be ignored just because a Democrat wants to be their champion,” he said. “If Republicans don’t want to carry water on property insurance, condo reform and condo safety, and if they want to continue with these red meat, culture war bills going into next year, they’re going to find me standing directly in their way.”

A self-described moderate Democrat, Grieco contends the majority of voters would be hard-pressed to identify which political party he belongs to solely based on his legislative and voting record.

But despite that, or perhaps because of it, he said, much of the GOP is afraid of him and legislators like him, including Book, Pizzo and West Park Sen. Shevrin Jones.

“We’re reasonable, moderate, sharp and good at debating, and I think we scare the crap out of them because we represent our party pretty damn well not only on the Senate and House floor but out in public,” he said. “When you hear things about the far-left Democrats and socialism — you can’t call me a socialist, and you sure as hell can’t say I’m trying to defund the police and a bunch of other crap they’re trying to paint Democrats with.

“But I’ll be the first to run toward the fire when it comes to certain issues, especially when it comes to the LGBT community, criminal justice reform and issues like that. My reputation precedes me and is carried with me.”

Taking another shot at his November opponent, Greico added that he’s also responsive to the public and not afraid to take criticism.

“Ileana Garcia, she’s got a lot of numbers blocked — there are a lot of members of the lobbying corps whose calls go straight to voicemail and don’t get returned,” he said. “She locked her door for the last month of Session, and she deleted her Twitter account.

“I took my door off the hinges during my first two years in Tallahassee.”