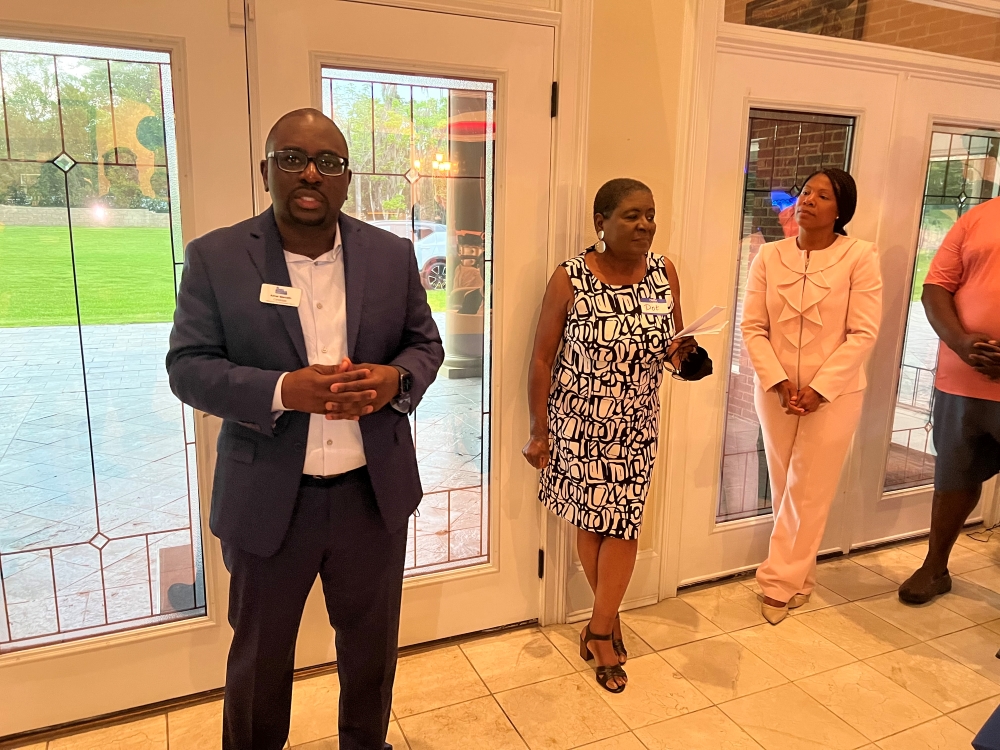 The event was held at the Tallahassee home of lawyer Darryl Parks. Parks and his former partner, Ben Crump, have both endorsed and donated to Marcelin, who previously worked as their law firm’s administrator.

Some of those at the fundraiser wore “No 2 Doak” shirts, which originated from the public push against the $27 million Blueprint allocation to Florida State University for Doak Campbell stadium repairs that passed in February. Marcelin publicly pushed against the funding, writing a letter to FSU President Richard McCullough asking him to withdraw the request.

Before Marcelin gave his remarks, Park told the crowd why he was supporting him over Williams-Cox. He said he thinks Williams-Cox is a good person, but has a strong bond and trust with Marcelin because of the work he did at the firm and in other areas of his professional career.

“He’s the type of person that when he tells you something, it’s bankable,” Parks said. “I really don’t give a damn who you are running against, I like you that much. It really didn’t matter because of how loyal you’ve been to me. And whoever shows up, I am going to go in with you against them.”

In his speech, Marcelin said he is not interested in personal attacks against Williams-Cox, but believes her leadership is not what the city needs.

“She’s a very good lady. She’s a nice person. But as I said to someone, these qualities of being nice, and being a good person, does nothing to the needs that are going unmet in our community,” he said.

He pointed to the Blueprint board passing the Doak funding, which Williams-Cox supported, amid public pushback. He said the allocation draining Blueprint’s economic development dollars will hurt Tallahassee residents in the long run.

“What we saw is that for every 10 or 11 residents that said ‘no,’ one said ‘yes,’ and we went ahead, and we did anyway,” Marcelin said. “Now we’re stuck asking the questions of where are we going to get funding in the next 10 to 18 years. And we the taxpayers suffer.”

He said the big dollar donations Williams-Cox has received from Tallahassee development companies and FSU leadership is a sign that they are scared he will hold them accountable and bring change to City Hall.

“Those individuals who have the ability to cut those $1,000 checks, they’re writing it for our opponent because they’re scared, and they’re scared about what’s coming,” Marcelin said.

Lightsey and Inman-Johnson, who have both endorsed Marcelin, had harsher words to say about Williams-Cox.

Inman-Johnson, Tallahassee’s first Black woman Mayor and Marcelin’s campaign manager, said she and her husband had been trying to convince him to run for months after they were impressed by his work on the Police Chief selection committee. She previously was a volunteer campaign advisor for Williams-Cox in 2018.

“The fact that I am here speaking so passionately tells you how much I feel she turned her back on our community,” Inman-Johnson said.

Lightsey, who was on the City Commission from 1989 to 2010, said she endorsed and donated to Williams-Cox in 2018 while helping her with fundraising, but has been disappointed with her tenure.

“We’ve been politically involved for a long time. We’ve supported people. Dianne’s not the first person I’ve supported that has been a tremendous disappointment once they were in office,” Lightsey said. “I believe Adner is who he is and will stay who he is in this arena.”

The race for Williams-Cox’s seat will play out during the Aug. 23 Primary.