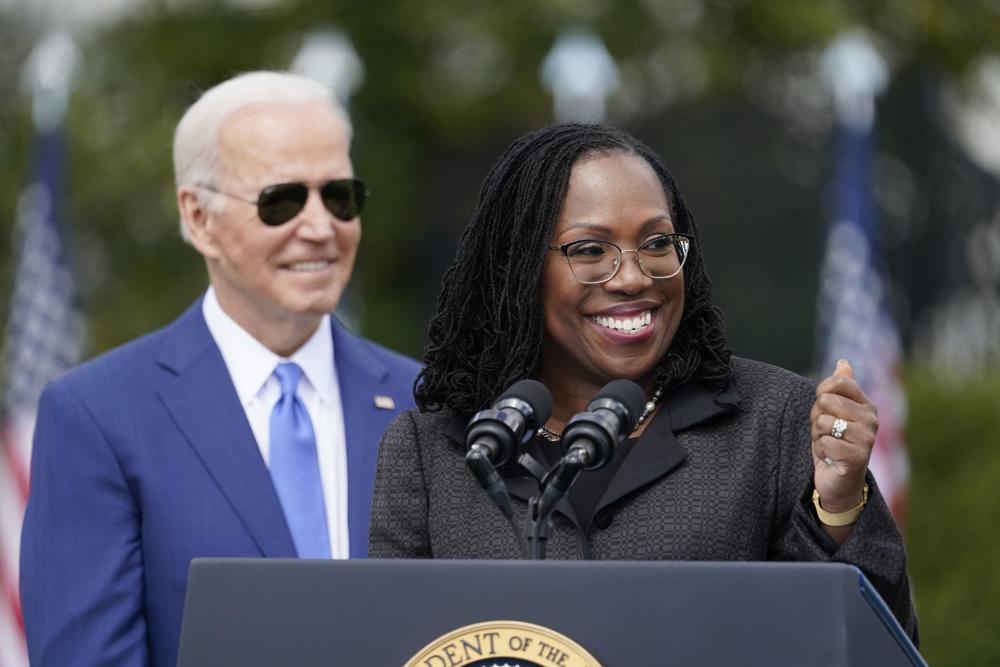 An AP-NORC poll shows 48% of Americans approve and 19% disapprove of Jackson’s confirmation.

More Americans approve than disapprove of Ketanji Brown Jackson’s confirmation to the Supreme Court as its first Black female justice, a new poll finds, but that support is politically lopsided. And a majority of Black Americans — but fewer White and Hispanic Americans — approve of her confirmation.

Overall, 48% of Americans say they approve and 19% disapprove of Jackson’s confirmation to the high court according to the new poll from The Associated Press-NORC Center for Public Affairs Research. The remaining 32% of Americans hold no opinion.

Jackson’s nomination fulfilled a campaign promise by President Joe Biden to name a Black woman to the court if given the opportunity. The findings suggest the confirmation did more to energize Biden’s Democratic base than it did to energize Republicans in opposition, despite vocal resistance from some GOP lawmakers who were largely united in voting against her April 7 confirmation. Three Republican senators broke with their party to confirm her with a 53-47 tally.

It’s not unusual for a relatively high share of Americans to express no opinion about a justice’s confirmation. In October 2018, after the vote to confirm Justice Brett Kavanaugh following a rancorous confirmation marked by sexual assault allegations, 35% approved, 43% disapproved and 20% said they held neither opinion. And in October 2020, before the vote to confirm conservative Justice Amy Coney Barrett to the seat of the late liberal Justice Ruth Bader Ginsburg, 30% were in favor of her being confirmed, 35% were opposed and 34% said they held neither opinion.

Jackson, 51, a federal appeals court judge in Washington, will join the court this summer when Breyer steps down. She will become the third Black person to sit on the court, following the late Justice Thurgood Marshall and current Justice Clarence Thomas. The court will for the first time have four women members and two Black members while White men will make up a minority of the court.

“It has taken 232 years and 115 prior appointments for a Black woman to be selected to serve on the Supreme Court of the United States,” Jackson said in remarks at the White House after her confirmation. “But we’ve made it. We’ve made it, all of us.”

“I just feel like it’s a historic moment to see a Black woman nominated, and then to also be confirmed to the Supreme Court, which has never been done,” said Brown, who is Black. “I’m just excited that she’s able to take all of the knowledge and skills that she’s developed over the course of her career and education and apply it … in a seat on the highest court.”

Brown said she watched some of Jackson’s hearings and felt Jackson “presented herself really well,” answering questions from lawmakers thoughtfully and thoroughly.

Jackson’s hearings were marked by intense lines of questioning from some Republican senators ranging from her sentencing record on child pornography cases to her views on teaching books on critical race theory in the classroom.

“I don’t agree with what she’s done,” said Thompson, who is White. “And I’m really sad that she’s been appointed.”

Brown and Thompson reflect not only the partisan divide but also something of a racial divide over Jackson’s confirmation. Among Black Americans, 63% approve and 18% disapprove of Jackson’s confirmation. Black voters were among the keys to Biden’s victory in the 2020 presidential election — about nine in 10 supported him, according to AP VoteCast — but his approval rating among Black Americans has dipped substantially in AP-NORC polls conducted since his inauguration.

Overall, more Americans say they approve than disapprove of how Biden handled Jackson’s confirmation, 42% to 33%. About eight in 10 Democrats approve; about two-thirds of Republicans disapprove.

Republicans and Democrats have similar levels of confidence in the court. Views also are similar across race and ethnicity groups.

The AP-NORC poll of 1,085 adults was conducted April 14-18 using a sample drawn from NORC’s probability-based AmeriSpeak Panel, which is designed to be representative of the U.S. population. The margin of sampling error for all respondents is plus or minus 3.9 percentage points.

___
Republished with permission of The Associated Press.