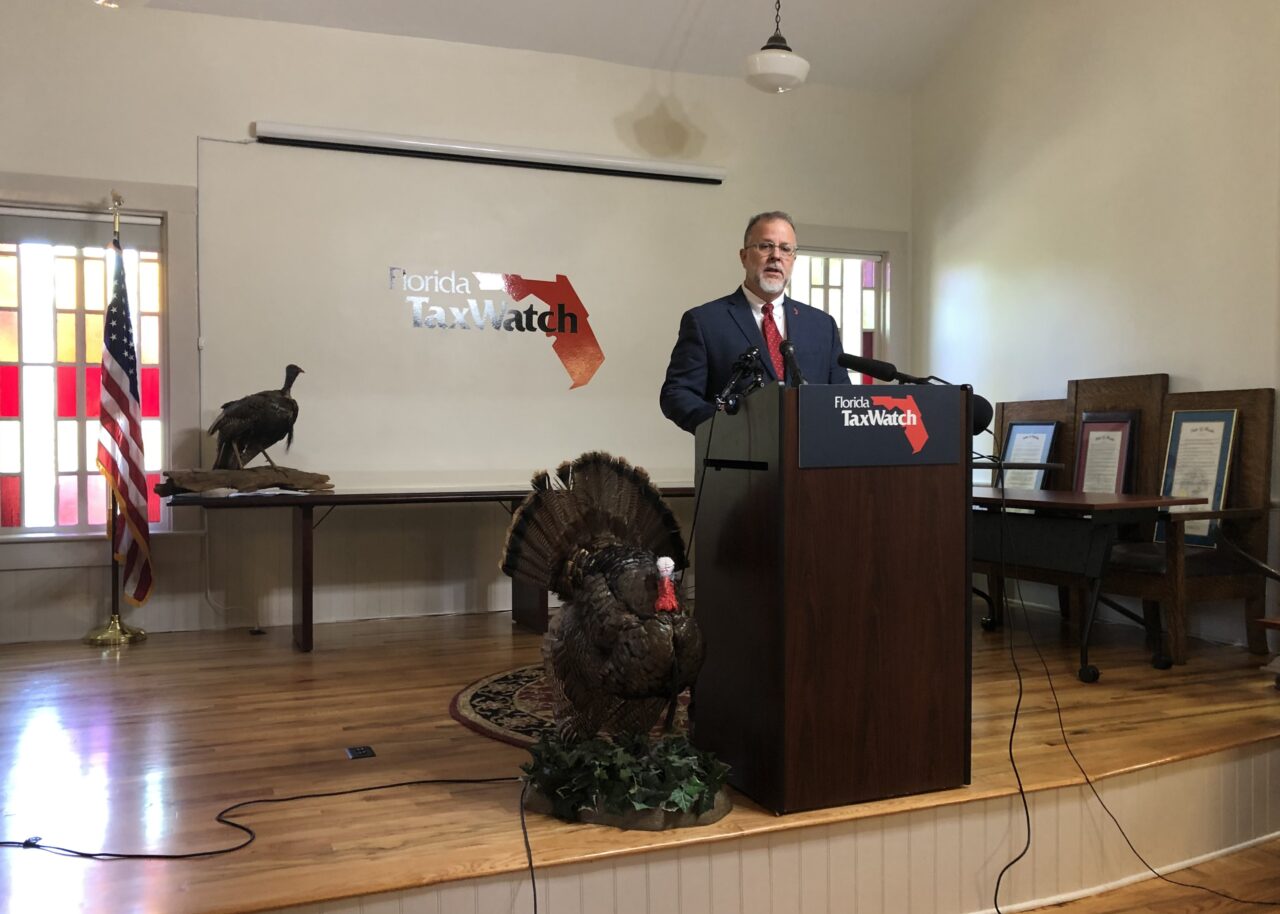 Budget bird dogs have flushed out a record-high $281 million in “budget turkeys” passed by legislators in this year’s proposed budget.

Lawmakers are expected to deliver the record $112.1 billion spending plan to Gov. Ron DeSantis sometime in the next two months. Florida TaxWatch’s research team has flushed out 166 appropriations projects in the 2022-23 budget that don’t meet their standards for a “thoughtful and thorough budget process.” TaxWatch is asking that the Republican Governor apply additional scrutiny to the 166 projects when he pulls out his markup pen.

“We’re unpopular with a lot of legislators because we’re going to call out the fact that they put things in the budget without doing it through the right procedure so the people of Florida could evaluate that during the 60-day Legislative Session,” Carvajal said.

To TaxWatch, doing it the right way means passing member projects through the legislative process, through the House or Senate budget and through the budget conference into the final budget proposal. Items that flouted that process, last-minute items, items that pull funding from an inappropriate trust, duplicative appropriations and items hinging on legislation that didn’t pass count as a “budget turkey.”

The $281 million worth of budget turkeys this year is more than $123 million larger than what TaxWatch identified last year. Spurred by an abundance of general revenue as Florida outpaced revenue estimates for 17 consecutive months, the total number of member projects skyrocketed to 1,221 and totaled $2.8 billion in this year’s budget. That’s up from 675 projects totaling $560 million last year.

This year, legislative leaders agreed on $759 million in spending projects from the “sprinkle lists,” a last-minute grab bag of items that are often the leaders’ pet projects. The sum of this year’s 223 sprinkles, some duplicates, was more than double the $350 million in sprinkles agreed to last year by Senate President Wilton Simpson and House Speaker Chris Sprowls. TaxWatch head researcher Kurt Wenner likened the $759 million to an afterthought.

“These sprinkles are the new turkeys,” Carvajal said. “TaxWatch is going to point out sprinkles, just as well as turkeys, because it’s really not the proper process for these appropriations.”

Most sprinkles this year weren’t entirely new projects, which would have made them automatic turkeys. Many items were additional spending to items that were approved in the baseline budget or items that were initially included in one chamber’s budget but removed from the negotiated proposal during the budget conference.

“While that’s not terrible, it’s still not the best way to budget, to spend that much money basically in private at the last moment,” said former U.S. Sen. George LeMieux, the TaxWatch Board Chairman.

Some of the three largest turkeys were sports complexes. The largest overall turkey started out as a $1 million item for a new spring training facility for the Tampa Bay Rays in Pasco County, Simpson’s home county. Although that spending was approved in the Senate’s draft budget, it was removed during budget conference and added back in as a $35 million item through the Senate sprinkle list.

Usually included in the list of turkeys are transportation projects funded outside the Department of Transportation’s Five-Year Work Program. However, lawmakers followed TaxWatch’s advice regarding those projects, opting to spend it from general revenue rather than the State Transportation Trust Fund. Similarly, TaxWatch gave a thumbs up to lawmakers’ approach to university construction projects and deferred maintenance by funding those with federal dollars.

A category for water projects, mostly wastewater projects, were added to the turkey list because of the recent focus placed on water projects. The Legislature has already come up with some funding pools for wastewater, but TaxWatch is calling for all wastewater spending to be done on a systematic and scientific basis.

Absent from the report is $3.5 billion in federal COVID-19 relief, most of which went through the legislative process or were increases to expenditures lawmakers had already agreed to. The $3.5 billion is what’s left over in federal aid that was approved last year. But because of a two-year expiration date, this year is the last chance for Florida to spend the funds or else it will be redistributed to other states. Carvajal told Florida Politics feared those states could be ones like California or New York.

Meanwhile, TaxWatch reupped its advocacy for a competitive selection process, discontinuing sprinkle lists and creating a set amount of funding for transportation projects.

“Every choice, every decision, every action that the Governor, the Legislature, local governments make about how to spend dollars or allocate dollars impacts the future of this state,” Carvajal said.