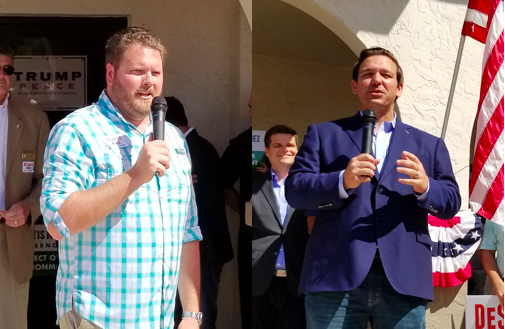 'I want to thank Senator Rodrigues for his service to Florida.'

DeSantis made clear he expects Sen. Ray Rodrigues, an Estero Republican, will not seek re-election in a tweet endorsing Martin for the job.

“I want to thank Sen. Rodrigues for his service to Florida. I wish him well in his future endeavors,” DeSantis posted.

“Jonathan Martin is a conservative fighter for Southwest Florida. I am pleased to support him for Senate District 33. He will be a strong ally for our agenda.”

Martin confirmed to Florida Politics he is running for Florida Senate.

“I’ve had the pleasure to serve with Chairman Martin on the Republican State Executive Committee, he will be a great conservative leader for Florida!”

Former Rep. Heather Fitzenhagen, a Fort Myers Republican who lost in a GOP Primary to Rodrigues in 2020, said she won’t run this year. “DeSantis has endorsed,” she told Florida Politics. That “absolutely” ends any viable challenge, she said.

DeSantis’ post came less than an hour after City and State Editor Jim Rosica tweeted that Rodrigues will step down for a job in DeSantis’ administration, citing insiders in Tallahassee.

Florida Politics confirmed with Lee County insiders that Rodrigues has been in talks with the administration for a couple days about a position, but none would confirm what the job may be.

Rodrigues released a statement through the Florida Republican Senatorial Campaign Committee confirming his exit from the chamber, and also supporting Martin as a successor.

“Serving the people of SWFL in the Senate has been an absolute honor, and I look forward to what’s next,” said Rodrigues. “Jonathan has the best interest of Florida families at heart, and I know he will continue to fight for our shared conservative values in the Florida Senate.”

“Ray Rodrigues has been a tremendously effective leader and a truly impactful member of the Florida Senate. We are so pleased for the opportunity he has to further ensure world-class education opportunities for our students and look forward to his continued success,” reads a joint statement from the GOP Senate leaders, seeming to indicate Rodrigues could take a position in education such as heading the State University System.

“Jonathan Martin has been on the front lines in the fight for our shared conservative values for 20 years, from growing our party to standing up for our freedom. We are proud to join Sen. Rodrigues in supporting Jonathan, as he continues the tradition of great conservative SWFL voices in the Florida Senate.”

Martin, a lawyer with Parvey & Cavenago, began reaching out on Wednesday to potential political supporters about plans to file and run for the seat. He has chaired the county Republican Executive Committee for years, and spoke at events with DeSantis during the Governor’s first run in 2018.

To date, Rodrigues remains the only candidate listed in the Division of Elections database in Senate District 33. While still a first-year Senator, Rodrigues secured his reputation as one of the most influential lawmakers in the Legislature. This year, he chaired the Senate Reapportionment Committee.

That committee crafted a new Senate map as part of the once-a-decade redistricting process.

Under that map, the Lee County-based Senate seat remains one of the most conservative in Florida. About 59.4% of voters in the newly drawn Senate District 33 favored Republican Donald Trump in the 2020 Presidential Election, compared to just 39.9% who voted for Democrat Joe Biden.

previousGov. DeSantis says Jan. 6 a 'dead horse' and a loser with voters