Lindsay Cross: A passion for clean water grew into a quest to reach voters 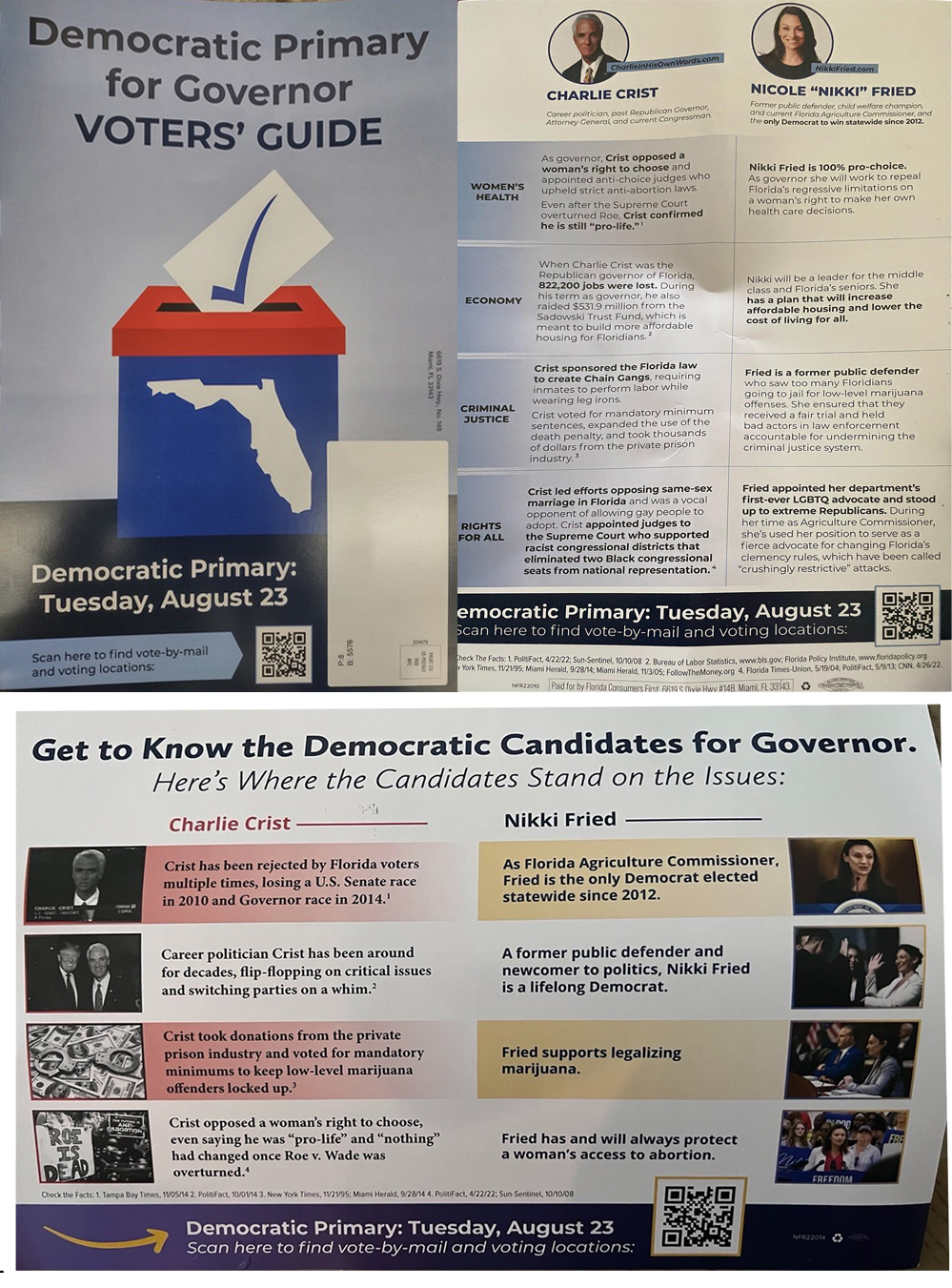 Recent polls have shown that nearly a quarter of Democrats remain undecided about the Primary choice for Governor.

Forget low-information voters, the Nikki Fried campaign for Governor is targeting Democratic voters who do more than glance at their campaign mailers before pitching them in the recycle bin.

A new set of mailers from Fried has no photoshop or evil-looking lighting on her gubernatorial Primary opponent Charlie Crist. On most of the four examples hitting Democratic mailboxes over the last two weeks, reading is required to realize these mailers are a burn on the former Republican Governor.

Crist and Fried are in a Primary contest for the right to challenge incumbent Gov. Ron DeSantis, who’s the heavy favorite to win.

First glance reveals a QR code for finding out vote-by-mail and voting locations. And the rest looks like it has helpful information on where the candidates stand on the issues. Crist is compared side-by-side with Fried on four crucial issues: women’s health, economy, criminal justice and “rights for all.”

In total, most of the mailers focus on Crist’s past positions on abortion rights when he was a Republican, along with his “jumbled” answer on the abortion question with Jim DeFede in May and later at a rally when he said he was “for life”

Aubrey Jewett, a professor of political science at the University of Central Florida, sees the Fried camp going after a specific segment of voters.

“They are going after Democrats who are undecided or maybe Democrats who are weak — maybe Crist supporters who are not locked in,” said Jewett, also noting that the QR code indicates an interest in tech-savvy types who like to use their phones. “If you are locked in, you wouldn’t even give it a second glance.”

St. Pete Polls’ latest survey  this week shows that undecided voters in the Democratic Primary are a dwindling number. After a June poll found 26% of them were undecided, a new poll this week found just 20% remain undecided. The poll, with a 2.7 percentage point margin of error, found that 56% are committed to Crist, growing from June, when 49% said they were. Meanwhile, the latest poll finds Fried’s support has not grown as much since June and 24% of those surveyed said they plan to vote for her. So, Fried must not only get the fence-sitters, but win over some who say they support Crist. .

The Fried campaign did not return an inquiry seeking comment about how many mailers were sent out. Florida Consumers First, Fried’s committee, paid for the mailing, it says.

Reports from the committee show three major direct mail expenditures paid to Wildfire Mail, based in Methuen, Massachusetts in mid-July: two payments each of $258,000 and one payment of $282,000.

Crist has been in Florida politics for 34 years and much of his history that might be unpalatable to progressives are chronicled on these mailers. Fried, meanwhile, came into statewide prominence in 2018, when she became the only Democrat elected to statewide office, winning her race to be the state’s Agriculture Commissioner.

There are no photos of him with instantly recognizable Republicans, like the Crist mailer hitting Fried for hanging with Republican U.S. Rep. Matt Gaetz. But Crist’s anti-abortion past is prominently mentioned:

“He even appointed anti-choice judges who have upheld struct anti-abortion laws,” the mailer reads.

Next to that Crist photo, we see Fried against purple and pink hues: “She will block laws that seek to ban abortion even in cases of rape, incest, and when the health of the mother is at stake.”

Under the heading “Criminal Justice,” the mailer evokes a 1995 bill Crist proposed while serving in the Legislature that would have brought back chained prison work crews. It earned Crist the moniker from some, “Chain Gang Charlie.”

Meanwhile, over on the other side of the criminal justice column, “Fried is a public defender who saw too many Floridians going to jail for low-level marijuana offenses. She ensured that they received a fair trial and held bad actors in law enforcement accountable for undermining the criminal justice system.

The Crist campaign said the mailers are borne of desperation.

“Nikki Fried’s campaign is losing, so now they’ve reached a new low by mailing a bogus, disingenuous ‘voter guide’ designed to mislead Democrats rather than inform,” said Samantha Ramirez, Crist spokeswoman. “It’s disappointing but it won’t slow our momentum to capture the nomination and defeat Ron DeSantis in November.”

The University of Central Florida’s Jewett says that as far as burns go, this one is “somewhat mild.”

“I’m surprised that the Fried camp is not being a little more aggressive,” he said.