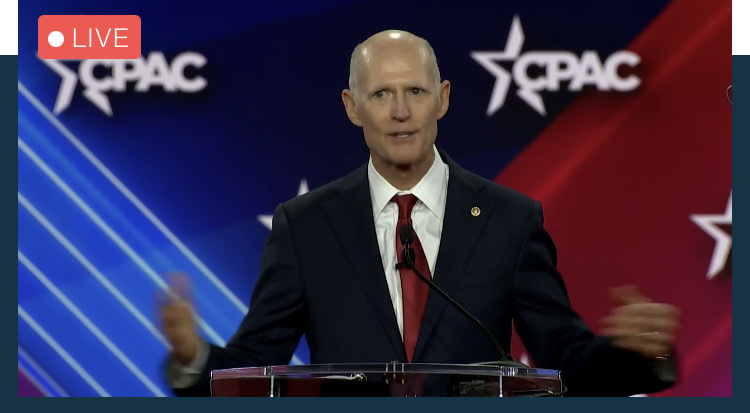 'Is this the beginning of the end of America?'

“The militant left wing in our country has become the enemy within,” Scott contended during his speech in Texas.

Scott acknowledged some critics would think his comments “pretty dramatic,” but urged a “quick situation report.”

“Great nations don’t automatically last forever,” Scott said. “A great civilization is not conquered from without until it has first destroyed itself from within. Think about that. Great civilizations that have collapsed or been conquered by a foreign adversary were first hollowed out from the inside.”

Scott also predicted that “in their new socialist order, everyone will obey and no one will be allowed to complain,” while again describing the “woke Left” as a “modern day version of book burners” and the “most narrow-minded intolerant people our country has ever seen.”

The Senator urged those on the Left to consider reading more widely\.

“Is this the beginning of the end of America?” Scott asked.

“It could be,” he answered himself. “But only if we allow it.”

Scott also pitched his 12-point plan to “rescue America.” His comments were punctuated by rousing ovations, suggesting his plan may be catching on with activists in the conservative movement.

Scott, head of the National Republican Senatorial Committee, has brooked controversy, squabbling with not just Democratic President Joe Biden but also with Mitch McConnell, the leader of his own Senate caucus.

Undeterred, Scott has continued to yoke himself to the proposal, even as suggestions continue that he may vie for Senate leadership after November, blasting all of the “Washington insiders, the woke media, the socialist squad” while defending his proposal.

He also had words for critics in his own caucus.

“Some Republicans complain about my plan. They mostly do it anonymously. But not completely,” Scott said.