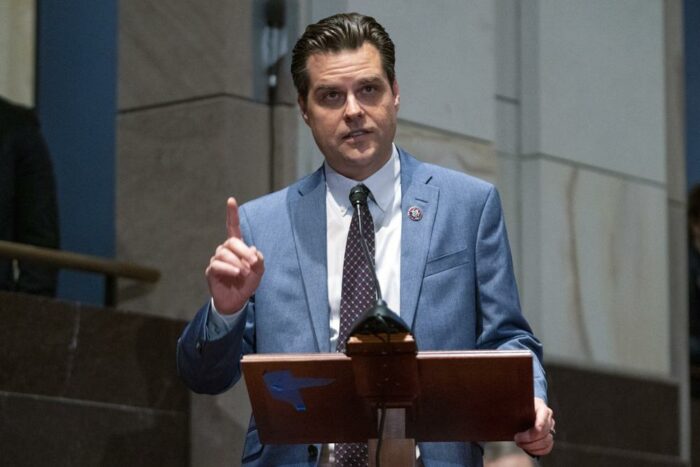 The incumbent is facing Mark Lombardo in the Aug. 23 Primary Election.

With less than two weeks to go before the Primary Election, incumbent U.S. Rep Matt Gaetz is focusing on President Joe Biden rather than his Republican challenger, Mark Lombardo.

Gaetz is taking his “Hold Biden Accountable Tour” to Pensacola on Saturday along with U.S. Rep. Jim Jordan from noon to 2 p.m. at the Sanders Beach-Corinne Jones Resource Center.

“The actions from the Biden administration against President (Donald) Trump and the American people are unprecedented and dangerous,” a spokesperson for the Gaetz campaign said. “Never before have we seen a government so weaponized against its people. Raiding political opponents, targeting parents at school board meetings, and protecting a compromised first family should never happen in America.”

Gaetz and Jordan serve on the House Judiciary Committee.

“On the Judiciary Committee, Jim Jordan and Matt Gaetz lead the strongest defenders of President Trump and the America First agenda,” the Gaetz campaign said. “They will lay out their vision Saturday to use robust oversight to expose corruption and failure in the D.C. swamp.”

The Lombardo campaign went after Gaetz and Jordan, saying given their history he hopes it’s an “adults only rally.”

“Jim Jordan reportedly covered up sexual abuse of young men was he was a wrestling coach at Ohio State University,” the Lombardo campaign said. “It’s no surprise that he will stand by Matt Gaetz, who is allegedly under investigation for child sex trafficking, using MAGA donors’ cash to pay pedophile Jeffrey Epstein’s attorney, and then begged for a pardon from Trump for any and all crimes.”

“Trump said no to the pardon and I believe the voters of the 1st District will say no to Lyin’ Matt Gaetz just like voters of conservative western North Carolina said no to Madison Cawthorn,” the Lombardo statement added.

The Gaetz campaign reported raising $547,150 in the second quarter. Included in that pot are donations from an heir to the Rockefeller fortune who had contact with a Russian agent.

George O’Neill Jr. and his wife Erica O’Neill donated a combined $17,400 to the Gaetz campaign. O’Neill was revealed as one of the contacts of Maria Butina, who was convicted in 2018 for acting as a secret Russian foreign agent.

Lombardo, who is running against Gaetz in the Aug. 23 Primary Election for Florida’s 1st Congressional District, has gone after Gaetz in a series of ads this summer, blasting him for a wide range of issues, including missing 200 votes during his time in Congress, his involvement in a child sex-trafficking investigation, voting against an anti-sex slavery bill, and seeking pardons.

nextRepublicans spending nearly all they've got in CD 7 Primary