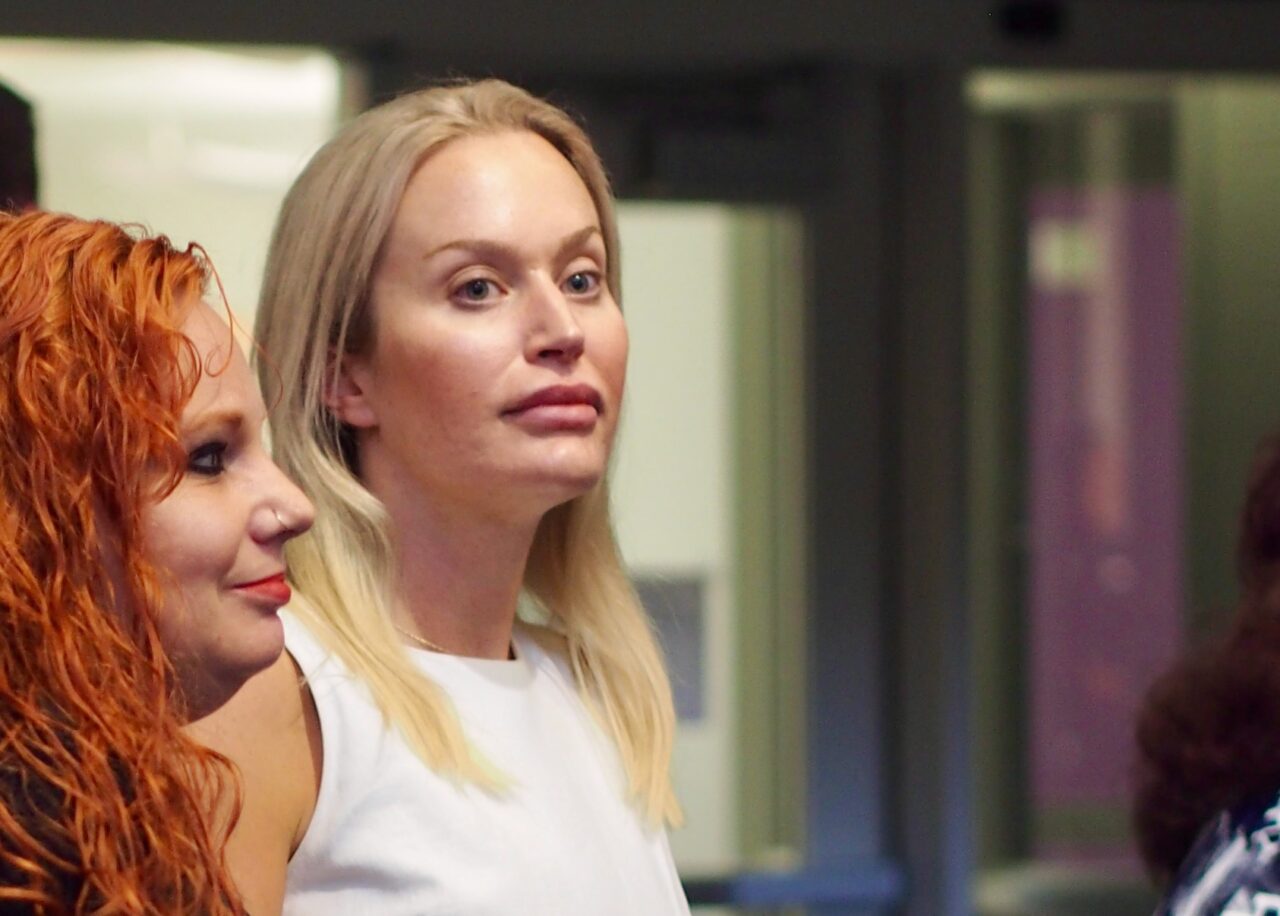 'They hate everything that we stand for, and I really think they hate this country.'

Christina Pushaw has some advice for conservatives frustrated with “bad faith” coverage from mainstream media: Recognize them for what they are, call them out, sever contact and help to replace them.

Ignoring their behavior does no good, she said. Neither does cooperating. Without counteraction, “legacy media” like the Palm Beach Post and Tampa Bay Times — among others, she said, that have become “the communication shop of the Democratic Party” — will maintain control of “the narrative.”

For 17 months, Pushaw has put that ethos to powerful use in the Sunshine State, bashing reporters and blacklisting outlets she deems dishonest or derisive of Republicans, particularly Gov. Ron DeSantis, to the admiration of a growing international audience.

“Maybe 20, 30 years ago, yes, bias in the media was a problem, but we’ve reached a new phase,” she told attendees of the National Conservatism Convention in Aventura during a panel discussion on media and culture Tuesday.

“It’s more than bias. It’s more than the old standards. It’s contempt. They hate you. They hate us. They hate everything that we stand for, and I really think they hate this country. So, what do we do? We cut them off.”

For many Floridians, Pushaw seemingly came out of nowhere when she won the job of DeSantis’ Press Secretary in May 2021. A former consultant to ex-Georgian President Mikheil Saakashvili, she wrote the Governor a flattering letter asking for a job one month after authoring an article lambasting former Department of Health analyst and DeSantis critic Rebekah Jones. He obliged.

Last month, she left that position to become Director of Rapid Response for DeSantis’ re-election campaign. Aside from helming a newly created DeSantis War Room, her public role and activities appear largely unchanged.

During the panel discussion, Pushaw laid out her four-step approach to dealing with the press.

Step one: Treat legacy and mainstream media as activists.

Pushaw opened her remarks musing about an exchange her office had the day before with a Miami Herald reporter who sought comments for a story on DeSantis’ use of biblical references in his speeches.

The way the reporter worded the email, linking the Governor’s religious rhetoric to the Christian nationalist movement and Jan. 6 attack, irked Pushaw. Instead of engaging, she counterprogrammed the pending story.

On Monday, one day before the Herald story ran, the DeSantis War Room posted a video from March of former Democratic U.S. Rep. Charlie Crist, DeSantis’ gubernatorial opponent. In the video, Crist can be seen comparing his and DeSantis’ names, respectively, to those of the Christian messiah and the devil. Conservative outlets seized on the clip. “Charlie Crist has a history of comparing himself to Jesus Christ, calling opponent ‘DeSatan,'” a Fox News headline declared.

In another instance, Pushaw took aim at journalist Taylor Lorenz. The Washington Post reporter was collecting information in April for an exposé of Libs of TikTok, a viral conservative social media account whose clips of LGBTQ-oriented content have helped fuel belief online that a contingent of liberal “groomers” is conspiring to sexualize children. Lorenz’s story revealed the name of the previously anonymous account owner, Chaya Raichik — a practice called “doxxing.”

When Raichik shared word of the pending story, Pushaw used her sizable following to apply pressure to Lorenz. She posted screenshots of an email Lorenz sent Raichik and photos of the reporter outside the home of one of Raichik’s relatives. A hail of abuse targeting Lorenz ensued.

“By the time Lorenz’s story came out, it had lost its teeth,” said Amber Athey, Washington editor of The Spectator. “Conservatives had already ripped the entire project to shreds.”

According to Pushaw, the almost exclusively liberal reporters staffing mainstream media newsrooms don’t care about fairness, accuracy or truth. All they want, she said, is to advance a liberal agenda while tamping down the voices of conservatives who dare to call them out.

“They see themselves not as journalists, not as reporters, not as investigators but as activists, as advocates, as political operatives, as gatekeepers, as arbiters of truth,” she said. “They believe they can defy reality if they stick to their talking points, censor, attack and discredit those with dissenting views.”

If they aren’t doing so already, most conservative politicians would do well to take a cue from DeSantis and just ignore inquiries from “legacy media activists,” Pushaw said. Where possible, she continued, they should shut the door on them altogether.

“(The Governor) understands the importance of rejecting their premises,” she said. “He does not grant them interviews. He does not give them access. If anyone on his staff — campaign or official — were to leak to mainstream media, they will be fired.”

The practice of barring certain media members is gaining popularity on the right. In May, the Conservative Political Action Conference (CPAC) held an event in Budapest. After the organization rejected the credential requests of many American journalists, their outlets complained.

Asked later by the New Yorker to comment on the issue, Hungarian Prime Minister Viktor Orbán, who spoke to CPAC attendees in Budapest and again last month in Dallas, gave a loathsome response through his office: “We do not wish to participate in the validation process of leftist-liberal propaganda.”

In an age of unprecedented hyper-partisanship, that’s smart politics, according to Pushaw.

“I don’t think we need to participate in that validation process either,” she said. “(If) they have no access to any conservatives, any Republican elected officials, then they are seen by everybody as what they are, which is Democratic Party communications operatives and activists.”

A similar thing happened in July, when several outlets — The New York Times, The Washington Post, POLITICO, USA Today and Florida Politics among them — were denied access to the Republican Party of Florida’s Sunshine Summit in South Florida.

Meanwhile, others like the Wall Street Journal, News Service of Florida, and South Florida Sun-Sentinel received credentials because, as Pushaw put it, they’d “proven themselves not to be activists.”

In Pushaw’s view, indulging left-leaning, mainstream news media is a zero-sum game for conservatives. Instead, she said, GOP officials should give preferential treatment to outlets and reporters who have either “proven themselves to be fair” or are so new they haven’t yet incensed them.

The more successful conservative media companies there are, the more viable employment options there are for people with right-leaning views who may today avoid voicing their true opinions for fear of termination, said Emily Jashinsky, cultural editor at The Federalist.

Take actress Gina Carano. In February 2021, Disney fired the former mixed martial artist from the hit show, “The Mandalorian” after she posted several messages on social media mocking mask-wearing during the pandemic, suggesting there was voter fraud in the 2020 presidential election and likening America’s current political divide to that of Nazi Germany.

After her expulsion, the conservative news outlet The Daily Wire, which had recently launched an online streaming service, hired her to star in a feature film with an estimated $75 million budget.

“Some of us wouldn’t be working in (media) if there weren’t some landing pads … robust enough to reach new audiences,” Jashinsky said. “If you have a (traditional) opinion of biological sex, then you need a landing pad where you can do your work in journalism (or) acting at an alternative institution.”

Step four: Stop being on the defensive, and attack.

The instinct most people have when reporters come questioning, Pushaw said, is to go on the defensive. People naturally want to please, to explain and clarify.

“But it’s not the most strategic thing to do,” she said. “What I’ve learned is we need to go on offense. We need to stay there. We cannot let the legacy media define our agenda (or) define how we talk about our agenda. And remember, when you’re explaining, you’re losing.”

It’s something Trump employed to great effect on the campaign trail and in office and at which DeSantis has grown adept as well. In a Sunday keynote speech at NatCon, the Governor stressed the importance of never taking a step back when “standing for what’s right.”

It’s also important to remember that loud opposition is not the same as a majority position, Pushaw said. As an example, Pushaw cited the Parental Rights in Education law, which critics call “Don’t Say Gay.”

The law is the subject of multiple lawsuits, some of which echo arguments by students, teachers and parents that it leaves LGBTQ youths, educators and their families feeling ostracized. Despite that, national polling shows a (slim) majority of Americans support the measure, which bars lessons on sexual orientation and gender identity through third grade and limits such instruction in higher grades where not “age appropriate.”

“A lot of people agree with us,” she said. “They might not be vocal about their beliefs because … you can’t be in many jobs, (but) once you remember that you have nothing to apologize for and that you’re speaking for a lot of people who aren’t able to speak out on their own but agree, that should give you the confidence to keep it up and keep fighting.”