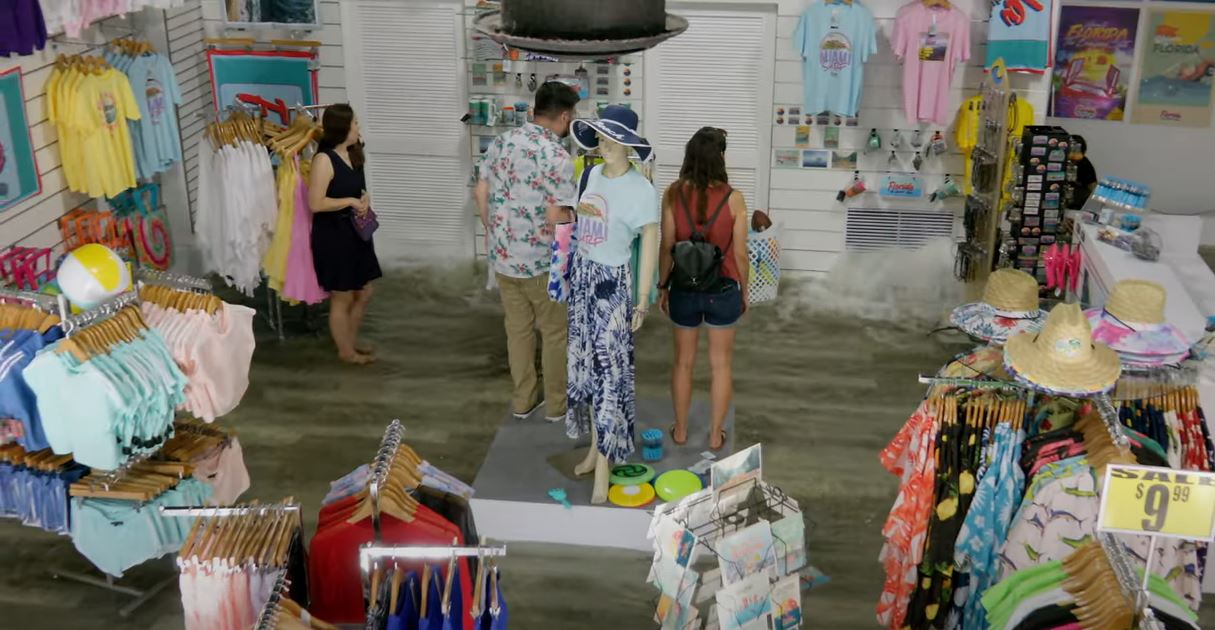 'Florida could stop being Florida if we don't take action soon.'

Several groups looking to encourage action to protect Florida against climate change are out with a new, splashy video aiming to show the possible effects of sea level rise up close and personal.

The video utilized a specially constructed gift shop in Florida. When individuals arrive to survey the store, however, water begins flooding into the store, prompting those present to hop up on a stand to stay dry.

The flood stops after just a few inches of water enter the store. But organizers at The CLEO Institute, VoLo Foundation and the Union of Concerned Scientists used the stunt to show how directly that flooding could impact residents if sea levels continue to rise.

The unsuspecting customers at the shop were also greeted with a message following the flood.

“If a few inches can have this effect on you, imagine what a few feet can do,” reads the message, shown on a specially constructed screen inside the story. “Florida could stop being Florida if we don’t take action soon. Rising seas, extreme heat and chronic flooding are already affecting us. Help us tackle the climate crisis by taking action now.”

The CLEO Institute was founded in 2010 and is a Florida-based, women-led nonprofit “dedicated to climate education, advocacy, and engagement,” according to their site.

“Sadly, these impacts are not felt equally. Low-income Floridians, and historically marginalized community members: people of color, indigenous communities, women, and the elderly, bear a disproportionate burden. The climate emergency can no longer be ignored, and our government has a responsibility to act with urgency and implement equitable climate solutions that prioritize people over profit now.”

The VoLo Foundation was launched by David S. Vogel and Thais López Vogel and works to fund projects to address environment and climate challenges.

“Florida is already suffering the impacts of the climate emergency,” Thais López Vogel said. “We have the technology and science to solve this crisis and protect the well-being of our communities. Our elected officials must take the necessary steps to ensure we meet a net-zero emissions and clean renewable energy goal by 2040. The moment to act is now.”

Finally, the Union of Concerned Scientists is a nationwide nonprofit composed of “nearly 250 scientists, analysts, policy experts and strategic communicators” who aim “to use rigorous, independent science to solve our planet’s most pressing problems.”

“Floridians are on the frontlines of climate change, with sea level rise, rapidly intensifying hurricanes, and astounding levels of extreme heat set to batter the state,” said Rachel Licker, principal climate scientist for the Union of Concerned Scientists. “Florida’s communities deserve bold, science- based, decisive action by their leaders to protect them from these threats and limit how bad they will get.”

The groups partnered with Miami-based ad agency Zubi to produce the video.

“This initiative will allow Floridians to understand what will happen if we do not take action,” reads text toward the end of the video.

A release spotlighting the video also emphasized the potential effects of continued warming across Florida.

“As the planet continues to warm and sea levels rise, the Sunshine State’s risks will only continue to grow with extreme weather events affecting all areas of life. These include higher costs of real estate, property insurance, energy, and food, along with an imminent threat to our drinking water source due to seawater intrusion.”

previousGov. DeSantis expands state of emergency throughout Florida ahead of Tropical Storm Ian