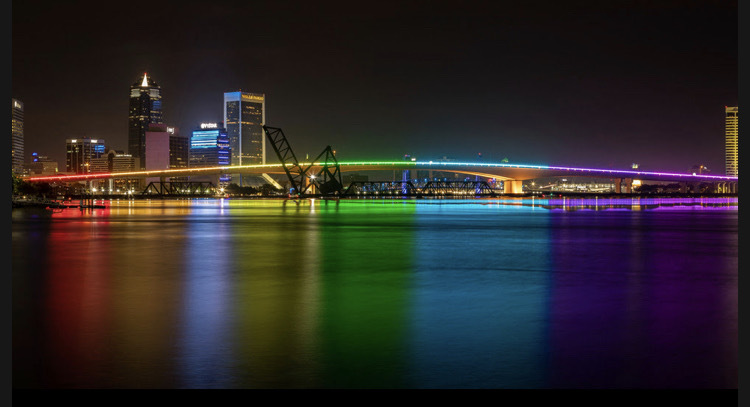 Ceremonial lighting schemes for Florida bridges have been among the many points of culture war controversy in the Ron DeSantis era.

Jacksonville was the fulcrum for one of these battles, after its decision to allow a rainbow-colored light scheme on the Acosta Bridge during Pride Month last year proved to be controversial with the Governor’s office, which eventually relented and allowed it after a brief stoppage driven by the Florida Department of Transportation.

That decision to thwart local will on lighting came days after DeSantis picked Jacksonville to kick off Pride Month by signing a bill banning transgender athletes from girls’ and women’s sports at a Christian school on the Westside of town.

FDOT ultimately put the decision in hands of local governments, and the one in Jacksonville is looking to delegate further still, with the all-Republican City Council Rules Committee voting in favor of a resolution putting the decision for lighting schemes in the hands of the Jacksonville Transportation Authority Board of Directors.

JTA is an independent authority under Jacksonville’s consolidated government, and has governing autonomy on many matters, with board members appointed by City Council and the Governor’s Office.

Following on a resolution passed by the JTA Board, Resolution 2022-705 looks to memorialize City Council’s intent to let JTA make decisions about the lighting. The resolution, introduced by Council President Terrance Freeman and co-sponsored by Reggie Gaffney, notes the JTA’s board decided to upgrade the lighting in 2018 and had “maintained and operated” since.

“FDOT requires that lighting systems capable of special lighting schemes, located on state or federal roadways that are operated and maintained by the local jurisdictions, be approved by county or local governments by way of resolution,” the bill summary notes, alluding to 2021’s controversy.

There was some pushback on an amendment distancing the City Council from JTA’s list of observances meriting light displays, with Republican Danny Becton looking for language that gave the City Council “responsibility” on the lighting schemes. Al Ferraro backed Becton’s play, noting that the transportation board was unelected. The amendment failed by a 3-3 tied vote.

The bill has still to be heard by the Transportation Energy and Utilities Committee Tuesday afternoon. If the resolution meets muster in that second and final committee stop, it moves on to the full City Council’s Oct. 11 meeting.

The resolution was only one piece of JTA news. Former Lenny Curry senior staffer Stephanie Burch was approved to fill the opening created by the resignation of Kevin Holzendorf. Holzendorf was arrested for driving impaired last month.