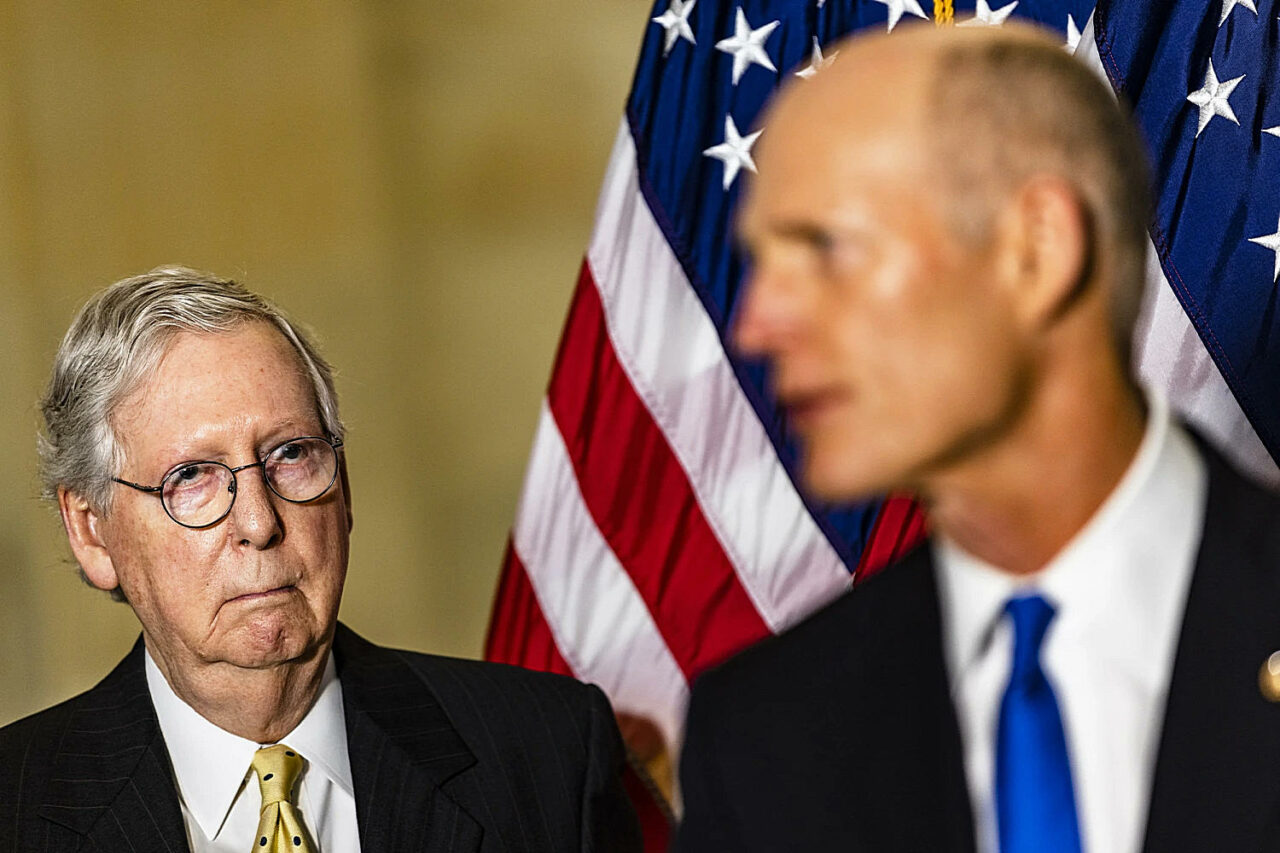 McConnell held on to the Minority Leader post in a 37-10 caucus vote.

U.S. Sen. Rick Scott waged the first challenge for party leadership that Senate Minority Leader Mitch McConnell has seen in 15 years. But the Naples Republican failed to usurp the Kentucky pol, with McConnell winning the top Republican post in a 37-10 vote.

But the Senator said he saw the vote as a step toward course correction.

“Although the results of today’s elections weren’t what we hoped for, this is far from the end of our fight to Make Washington Work. I will never stop fighting to end Joe Biden’s reckless government spending and the devastating inflation Democrats have caused,” Scott said. “I never thought for a moment that this fight would be easy, but I’m optimistic that, together, Republicans can rescue America with the principles that unite us against the dangerous path Democrats have set it on.”

“We need a different, more collaborative governing model for our conference that is focused on fiscal sanity and bringing function to the Senate,” Johnson said ahead of the vote.

The nomination came days after U.S. Sen. Marco Rubio, Florida’s senior Senator, called for the leadership vote to be delayed until after the runoff for a Georgia seat.

But Scott in a sense represented an odd alternative. He had Chaired the National Republican Senatorial Committee (NRSC) this election cycle. His chief goal was to attain a Republican majority in the Senate, which required netting one seat. Instead, Democrats have already secured the 50 votes needed to retain a majority, thanks to Vice President Kamala Harris’ tie-breaking vote.

The runoff between incumbent Democratic U.S. Sen. Raphael Warnock and Republican challenger Herschel Walker on Dec. 6 will determine if Republicans actually net a loss in seats.

Rubio and Johnson both won re-election under Scott’s tenure as NRSC Chair, but for much of the cycle, tension between Scott and McConnell publicly surfaced.

That most notably happened after Scott released his Rescue America plan as an alternative to President Joe Biden’s agenda. Scott, before and after the election, said Republicans in Washington need to offer an alternative vision instead of running on a negative message. That fueled his challenge to McConnell’s leadership.

“It’s time for new leadership in the Senate that unites Republicans to advance a bold conservative agenda,” Scott posted on social media this week.

But Democrats pounced on the plan for discussing sunsets on major programs like Social Security and reviewing them for renewal. Biden regularly invoked Scott’s name during the election cycle and shared the plan frequently.

McConnell quickly distanced himself and candidates away from the plan.

Rubio notably declined to embrace Scott’s plan during a Senate debate against Democrat Val Demings, and Rubio went on to win that contest in a landslide.

McConnell also criticized Scott over candidate recruitment. Scott, whose political origin story began by defeating establishment favorite Bill McCollum in a 2010 Republican Primary for Governor, stopped the NRSC from taking sides in Republican Primaries. That meant candidates like Walker and Pennsylvania Republican nominee Mehmet Oz won contested Primaries, often on the strength of an endorsement from former President Donald Trump, and went on to close elections or outright defeat in November.

McConnell maintained messaging problems in the Midterm were a problem introduced by the campaign arm, not by Senate Republican leadership.

“We underperformed among independents and moderates because their impression of many of the people in our party in leadership roles is that there’s chaos, negativity, excessive attacks — and it frightened independent and moderate Republican voters,” he told reporters Tuesday, according to The New York Times.

next911 dispatchers overlooked, miss out on $1K bonuses from Gov. DeSantis