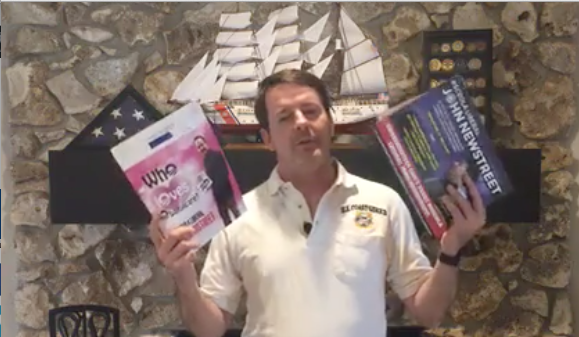 The House District 44 Republican primary is boiling, as John Newstreet responded to a shadow group’s attack ads with a Facebook Live video decrying them as “not true” and his campaign blamed rival Bobby Olszewski, who denied involvement and disavowed such politics.

The ruckus is over mailers and an internet site sponsored by a new group called Central Florida Republicans for Truth, which contend that Newstreet is a liberal-in-Republican clothing who supports the Affordable Care Act and amnesty for illegal aliens.

Newstreet says the claims are not true, and his opponents know that.

“They obviously don’t care about truthfulness,” Newstreet states in the Facebook Live video. “I am disheartened that someone who has called me a friend fur years now choses to lie about me for his own political gain.”

Newstreet’s campaign pointed the finger at Olszewski. The two, and two other Republicans, are battling toward an Aug. 15 primary to run for HD 44 in an Oct. 10 special election, to represent southwest Orange County.

Olszewski completely denied any association with the group behind the mailers and internet video, Central Florida Republicans for Truth, and said he rejects the style of politics they are promoting.

Newstreet and Olszewski are in a race with fellow Republicans Bruno Portigliatti and Dr. Usha Jain. Portgliatti also denied any involvement and repudiated the ads. Jain did not respond Monday, but no one has suggested she might be involved.

Absentee ballot voting already is underway in the primary.

In his Facebook Live video, Newstreet calls the mailers and video, “misleading attack ads.” He declares, “Folks these negative pieces simply are not true.”

Newstreet’s campaign Manager Anna Taylor said in a statement to FloridaPolitics.com, “Bobby has known John Newstreet for more than a decade ago. He knows John is against illegal immigration and amnesty.

“As he’s proven today, with [Windermere] Mayor [Gary] Bruhn and [Ocoee Mayor Rusty] Johnson dropping their endorsement of him because of his flip-flop on home rule, he’s willing to say and do anything to get elected to office,” she continued. “The connection between [Michael] Millner and Bobby’s campaign team is obvious and the fact they are hiding their identity just shows the type of candidate they are working with.”

She did not elaborate about how Millner or the committee’s connection to Olszewski’s campaign was obvious. Millner has been treasurer, chairman, or registered agent for dozens of political action committees all over the state.

[Earlier Monday Bruhn and Johnson withdrew their endorsements of Olszewski, because of his campaign plank to push for local office election term limits.]

Central Florida Republicans for Truth filed to be registered on July 14, with Jacob Milich as chairman and Millner as treasurer. Milich did not return a phone call Monday seeking comments on the campaign, or who is paying for it.

Central Florida Republicans for Truth has not yet filed any campaign finance disclosures that would indicate its source of money.

When asked if he was at all connected with the group, Olszewski responded:

“I don’t know anything about them and reject negative campaigning. I’ve walked thousands of doors, made thousands more phone calls and ask the voters to judge who’s track record is consistently conservative. I will say I like and respect each candidate in this race. Having been on the receiving end of negative ads I understand the need or desire to blame someone. But as I said before I know nothing about any of the groups involved in this race.”

In his Facebook Live video, Newstreet makes it clear that he blames his “opponents” for the attacks, and makes it clear he knows which one, saying the former friend, “choses to lie about me for his own political gain.” Yet Newstreet does not himself name names.

That appears to leave Jain, who is a woman, out of his suspicions.

When he was asked if he were involved, Portigliatti replied, “Absolutely not. We don’t know anything about the group or who is behind the group. We’re disappointed in this type of campaigning; voters in House District 44 deserve candidates that are focused on the issues.”

The mailers charged that Newstreet is new to the district he’s running in. They charge that he supports the Affordable Care Act. And they and a video on a related website charge he told a protest group that supports amnesty that “we’re supportive.”

Two or the charges are not new to the campaign.

Newstreet responded two weeks ago to claims that he was new to the district, saying he’d bought his home there in 2008 and has lived there off and on ever since, most recently for the past 16 months, moving in and out of the district as his jobs dictated, but always holding onto the house as his permanent residence.

The third matter, of amnesty for illegal aliens, dates to when Newstreet was a staff member for then-U.S. Sen. George LeMieux. Newstreet’s HD 44 campaign said protesters were seeking Republican LeMieux’s support for the Dream Act in 2010, and had gathered outside his office. Newstreet, the senator’s district representative, was dispatched to go outside and talk to them. He did so by assuring the protesters that LeMieux’s  office would listen to their concerns, but made no promises or assurances of support for the act, the Newstreet HD 44 campaign said Monday.

LeMieux did not support the Dream Act.

The video Central Florida Republicans for Truth posted on their anti-Newstreet website, uses jarring images and pulsating text to declare, “In 2010, State House candidate John Newstreet addressed a radical group dedicated to increasing illegal immigration and passing the Dream Act.” It then shows him addressing the gathering by saying, “We’re friendly to you. We’re supportive. Hopefully, we can get something done.”

The video does not mention that Newstreet addressed them on behalf of LeMieux, while they were protesting his office.

“Folks, that’s not how we do things in our community,” Newstreet stated in his video.