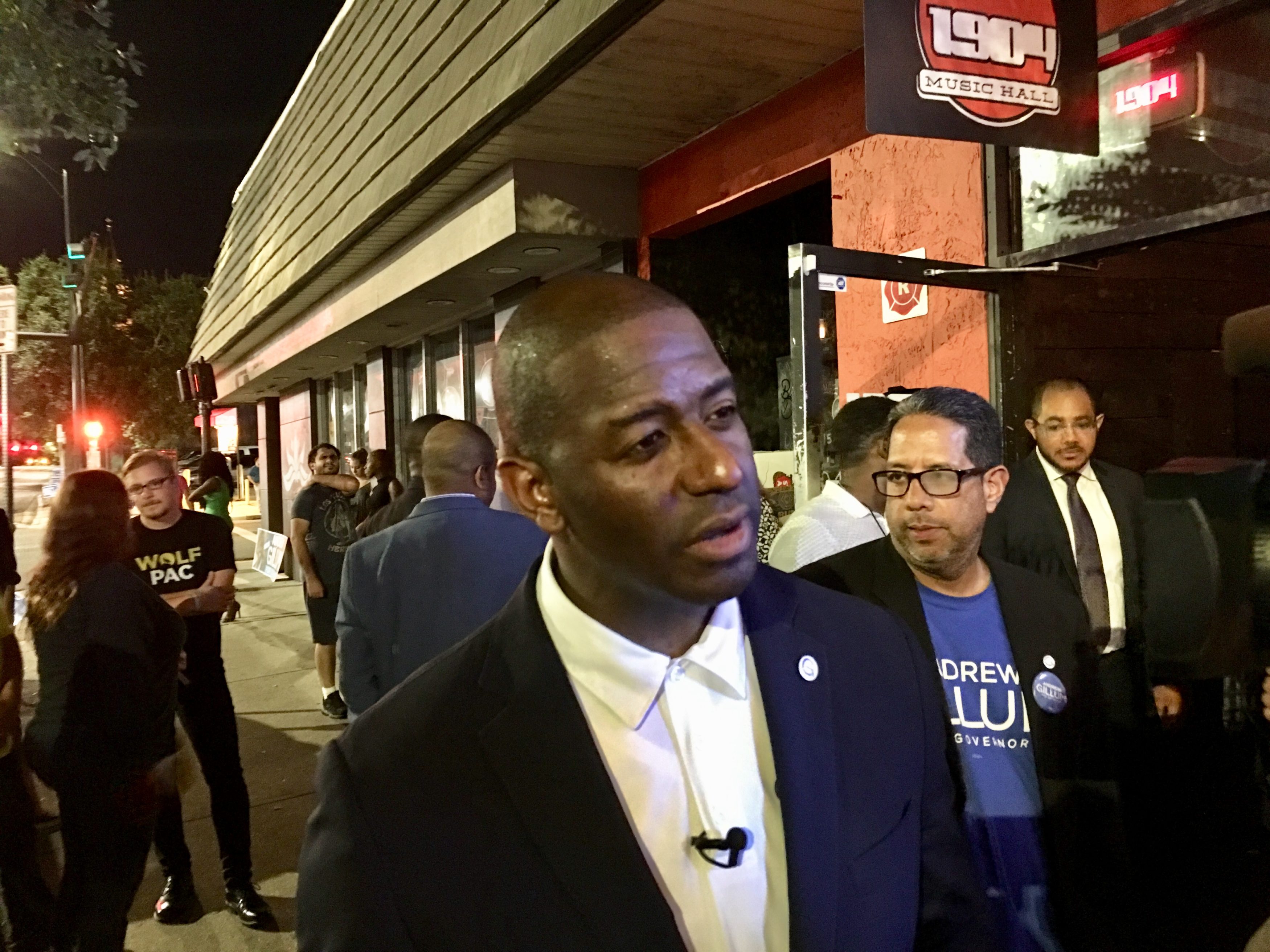 Tallahassee Mayor Andrew Gillum has heard that his campaign isn’t viable from the moment he got in the race.

With the latest survey from St. Pete Polls of the Democratic race for Governor indicates that Gillum is within six points of frontrunner Gwen Graham (and a private poll showing Gillum at 33 percent, 11 points above the field), a coalition of progressive groups announced Monday that they will commit $3.5 million to help Gillum get over the finish line.

Meanwhile, he’s one of a few candidates barnstorming the state on a bus, and that bus rolled into Jacksonville Tuesday evening, where Gillum rallied “young professionals” at a downtown hotspot.

Gillum’s supporters in Jacksonville tend to be younger and more ethnically diverse than those backing the other Democrats (and never mind Republicans).

His strategy has been to expand the voter universe; however, as he has noted, resources had previously precluded him from letting his target voters know who he is.

Now, finally, they do know. If they didn’t, perhaps Bernie Sanders‘ swing through Central Florida with Gillum taught them.

And it’s just possible he can close the deal before next Tuesday. His team feels confident in talking about a “surge.” And Gillum, who was confident when he was polling next to Chris King, came into Jacksonville more so, having fulfilled his initial campaign vision, an “18 month view of engagement.”

Gillum, when asked about the new polls swinging his way, noted that his campaign didn’t begin its “paid communication until two weeks ago.”

“We knew that because we couldn’t match the financial resources of the other campaigns, that we had to wait until the iron was really hot before we could strike and maximize our message. As voters are learning that we are a real option in this race,” Gillum said, “they’re choosing us.”

“I believe it’s going to be that momentum that will surge us through [to the nomination],” Gillum said.

Regarding the third party groups backing him, Gillum noted that while he wasn’t deeply “familiar with what the outside groups are doing,” he hopes that “the $3.5 million investment will be directed toward the field.”

“That’s the best bang for the buck at this point, to get to voters and move those voters to the ballot box. If we do that,” Gillum said, “and they do that, we win.”

“I think we win anyway, but certainly … the field level is where we do best,” Gillum noted.

“We’ve been the same all the way through. We’ve led the field on all the issues,” Gillum added, “It’s after I’ve gone there on every issue, the candidates tend to follow me there.”

Voters, Gillum predicted, will be able to choose who represents their viewpoints “most authentically, what their experiences are as Floridians.”

Gillum has adopted the Migos “Walk it like I talk it” lyric as a de facto campaign anthem, a very much of-the-moment song that is a natural touchstone for his base — younger voters who understand that this election represents the beginning of a generational shift in Florida politics.

In front of a packed out crowd in Jacksonville’s 1904 music hall, one of the better known live music spots downtown, Gillum quoted that song again.

“I walk it like I talk it,” Gillum said. “Some of my opponents don’t.”

Indeed, with one major Democrat being a (at best) recently lapsed member of Mar-A-Lago and another one getting fundraising help from Republican Miami-Dade Mayor Carlos Gimenez, it was easy to guess who that reference might have covered.

Gillum, walking the stage looking more like a performer than a politician, rocked the audience, but it was — in the end — GOTV.

Concepts like “work with dignity … a wage you can live on … not poverty and squalor” — these were not abstractions to those on hand. They were real to these millennials and Gen Y types, who see the 20th century conception of the middle class shrinking in the rear view mirror.

“There are more of us than there are of them,” Gillum said, regarding a potential general election clash with a Republican.

Polls are all over the place, and that general election battle may or may not happen.

But the feel in Jacksonville Tuesday night was that Gillum will be in it when the votes are counted in six days.

nextPolitics aside, Tallahassee should hope for divided state government