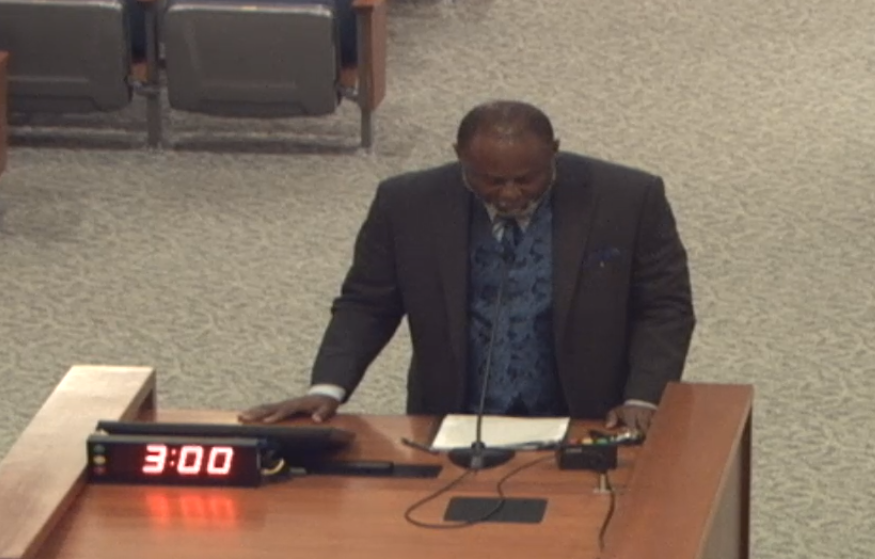 A suit filed in federal court Tuesday pits a Jacksonville preacher against his city, an extension of larger tensions about the role of faith in local politics.

“Gundy v. City of Jacksonville” stems from a Council meeting during the heat of the 2019 mayoral campaign, during which Rev. R.L. Gundy delivered a politicized, polemical prayer in support of his favored candidate.

Days before the election in March, Gundy (a supporter of one of Curry’s opponents) issued a prayer that ultimately was shut down by the Council leader.

Gundy talked about the “polluted river,” about water problems comparable to Flint, before castigating the “legislative body [that] refuses to seek forgiveness for slavery.”

Gundy moved on to address the “political climate dividing the community,” one characterized by “pride and selfish[ness]” and a critical mass of players “intimidated by the executive branch.”

On Twitter in May, Bowman defended the censored prayer.

“I would suggest you watch the invocation given right before primary election, invited by the introducer, and why unfortunately I needed to introduce this legislation. You won’t hear all of it because I had the microphone shut off,” Bowman wrote in May, regarding an ultimately-failed bill that would have changed the Council invocation process.

Gundy, in comments to the Florida Times-Union, said he “was compelled to take this measure filing a lawsuit due to the severity of the acts against [his] constitutional rights.”

He will be represented by Neil Henrichsen, according to the T-U. Henrichsen is a former chairman of the Duval County Democratic Party, and he also ran for state House downstate in 2018.

Jacksonville has often seen conflation of church and state, including during the just completed primary season.

In response to a spike in the murder rate (and perhaps, perhaps an impending election as well), incumbent Democrat called for a day of healing in the Council chambers.

Said “day of healing” looked more like a revival meeting.

The hour-long event was full of prayers and hymns, with roughly 150 in the crowd singing, praying, and raising their hands rapturously as appropriate.

Councilman Reggie Gaffney, the Democrat who convened the event, was not worried about the potential conflation of church and state.

A document produced as the so-called “city prayer,” read in unison, posited that Jacksonville is “gripped by sin,” with “lives polluted by sexual sin.”

A speaker noted that the event was targeting “every sinner and backslider in the city,” adding that “Jacksonville is on the rise in Jesus’ name.”

Jacksonville on the Rise is the name of Mayor Lenny Curry‘s political committee. Curry and Gaffney generally align on issues; the Councilman’s brother works in the Mayor’s Office and was at the event.

Did this event help? Did Gaffney benefit from using city resources for a religious event timed to boost his re-election chances?

Gundy’s position is that preachers prior to and after him have had license to say whatever they have wanted under the banner of prayer.

The federal courthouse, just footsteps from City Hall, will ultimately decide if he – or the city of Jacksonville and Councilman Bowman – are correct.