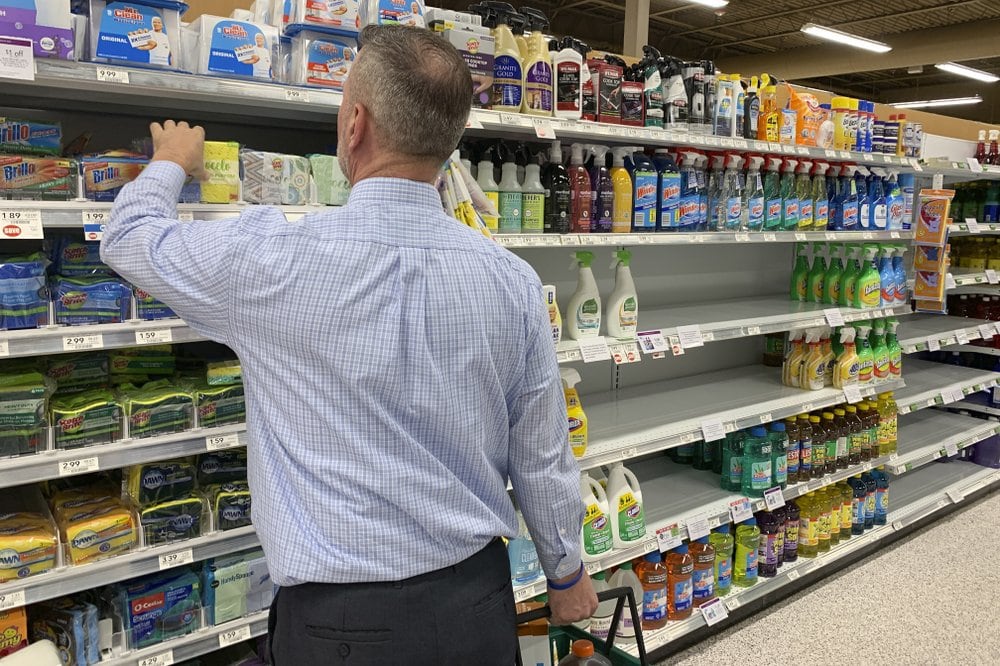 A customer looks for scrubbing pads near empty shelves of cleaning supplies at a Publix Supermarket amid concern over the COVID-19 virus on Monday, March 9, 2020, in Pembroke Pines, Fla. (AP Photo/Brynn Anderson)

Some major retail chains are moving to install sneeze guards to help prevent the spread of the novel coronavirus, also known as COVID-19.

Florida grocer Publix announced it will start installing the plexiglass barriers this weekend at registers, customer service desks and pharmacies. The Lakeland-based company says it will take about two weeks to complete installation across its entire chain.

“We’re taking extra precautions for the well-being of our customers and associates,” said Maria Brous, a spokeswoman for Publix Super Markets Inc.

“At Publix, the health and well-being of our associates, our customers and our communities remains our top priority,” said Maria Brous, director of communications, in a March 23rd statement. “Following our disinfection protocol and with the support of the public health department, the store is operating normal business hours. We are thinking of our associate and their family during this time and wishing them a swift recovery.”

Publix has also designated Tuesday and Wednesday mornings, from 7 – 8 a.m., as senior shopping hours for customers 65 and over.

Other large retailers are also installing the barriers. Walmart and some of the nation’s largest grocery store chains – Kroger and Albertsons — are also putting the partitions into place in their stores.

Walmart announced it has started installing sneeze guards at its pharmacy lanes at both Walmart and Sam’s Club stores and says it will install guards at the regular Walmart registers over the next few weeks.

The protective barriers will stand between a customer and the employee so that any airborne droplets – from a cough or a sneeze – will be blocked from reaching the person on the other side.

Publix has reduced its store hours to 8 a.m. to 8 p.m. so employees have extra time to devote to cleaning and stocking the shelves. Walmart has cut hours to 7 a.m. to 8:30 p.m.